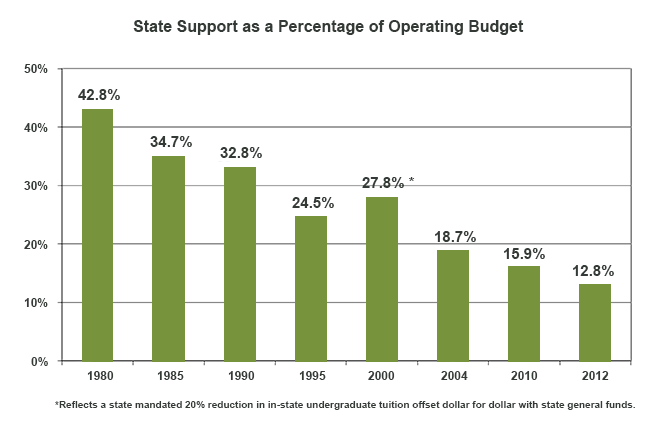 Traditionally, public universities have relied on the state legislature to help foot the bill for a good portion of their operating costs. As funding diminishes, however, the relationship between the public university and the state will likely change.

“When states lose the ability to support their school, they will be willing to make new arrangements,” College of William and Mary President Taylor Reveley said.

The state of higher education is changing not only in Virginia, but also across the nation. Reveley said he believes colleges should not remain under such rigid state control as funding decreases.

“It’s political reality,” Reveley said. “You can’t have such a fundamental change in higher education across the United States without things changing. But the change won’t be happening anytime soon.”

Economics Department Chair David Feldman — co-author of a book titled “Why Does College Cost So Much?” — said over the past few decades, states have become increasingly burdened with financing services and projects that don’t have their own revenue streams — things like prisons, roads and Medicaid. Since tuition provides revenue for colleges, it’s often perceived they can survive with less state funding by either raising tuition or cutting costs.

“As unpalatable as raising tuition is to legislators, they’d rather raise tuition than taxes because of the political blowback related to raising taxes,” Feldman said.

He added that because funding higher education — particularly funding elite public schools like U.Va. and the College — affects fewer people than K-12 education and roads, higher education is more susceptible to cuts.

Currently, the college received 12 percent of its operating budget, approximately $43 million, from the Commonwealth. Vice President of Strategic Affairs James Golden cited that although the College benefits tremendously from state support, we remain somewhat restrained by its rules and regulations.

Since state funding has continually decreased over the years, public schools are looking to different operating models and new policies to close budget gaps.

Public schools are beginning to openly discuss moving from a governor-appointed Board of Visitors to a professional board as another step away from the state — a U.Va. committee recently released a report that recommended such a change for the school.  Having a private, versus appointed, board could also allow for more continuity in projects and less politicization of agendas.

Setting tuition at a fixed rate for all students, as well as changing ratios of in and out-of-state students accepted would be effective solutions. Feldman said enacting them, however, would be very difficult, if not impossible, to implement. He described the William and Mary Promise, a new financial model the College adopted in the spring, as an effort to take more control over its operations without being too radical a change.

“The move to the William and Mary Promise is a recognition that the old model of going to the state on bended knee every year doesn’t work when the state has so many other legitimate things to spend its money on,” Feldman said.

In 2012, President Reveley announced a new financial foundation for the College, resting on four “P’s:” performance, productivity at high levels, philanthropic financial support and public support of capital projects along with support from the state.

“The trend is clearly that the state will provide a lower percentage of our operating funds going forward,” Golden said. “If you look at the state’s operating budget, there are so many competing interests, that it’s impossible for them to give us more support.”