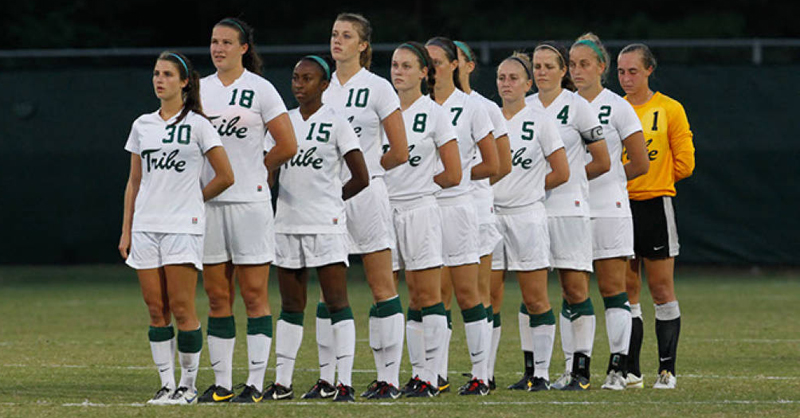 William and Mary survived a grueling weekend, battling to two double overtime draws in three days.  The Tribe (3-1-4) fought to a scoreless tie with visiting Pennsylvania Friday night before traveling to Princeton Sunday to tie the Tigers, 1-1.

The Tribe was unable to mount a consistent offensive threat in its game against Penn.  The hosts only managed two shots in the opening half, and although sophomore forward Barbara Platenberg fired a shot on goal in the 33rd minute, the Tribe was shut out before halftime.

Things hardly improved after intermission, because the Tribe only managed to make four scoring attempts in the last 45 minutes of regulation time. In contrast, the Quakers managed 14 shots in regulation, including nine in the second half.

Penn nearly scored the go-ahead goal in the 76th minute, when Clara Midgley fired a daring shot on goal.  But sophomore goalie Caroline Casey made a spectacular diving save to preserve the scoreless tie.  Casey, who has been rock solid all year for the Tribe, finished with seven saves in the game against a thoroughly dangerous Quakers offense.

The Tribe had a late scoring opportunity, when junior forward Emory Camper bolted through the Penn defense and fired a pass into the box in the closing seconds of regulation.  However, senior forward Dani Rutter’s header was just wide of the net and the two teams headed to overtime with a score of 0-0.

The teams were evenly matched throughout the two overtimes.  Neither squad managed a shot in the first extra period, as the two sides squabbled for possession in the middle of the field. Even though the two teams had a combined six shots in the final 10 minutes of the match, none were on goal.  The final seconds harmlessly ticked away, and the match ended in a tie.

The Tribe had little time to recover from their Friday night marathon before traveling to New Jersey to face Princeton. The matinee began favorably for the College, as sophomore midfielder Nicole Baxter notched a goal on a free kick in the 10th minute to stake the Tribe to an early 1-0 lead. The goal was Baxter’s first of the season.

Princeton’s offense posed a constant threat to the Tribe in the first half, but the Tribe defense and Casey repelled each one.  Casey logged two saves in the first half and, despite being outshot 8-5 in the opening period, the Tribe carried an improbable 1-0 lead into halftime.

However, the game grew more challenging for the College.  The Tribe managed just one shot in the second half, an on-target strike from Baxter that Princeton’s Darcy Hargadon stopped short of the goal.

Princeton dominated the second half, firing an imposing 12 shots and earning seven corner kick opportunities.  Despite facing a constant assault from the host offense, the College’s defense held firm for most of the period and came close to finishing off a shutout victory.

However, the Tigers finally broke through in the 82nd minute, when Gabrielle Ragazzo corralled the ball on the left side of the box and fired a shot past Casey into the opposite corner of the net.  The goal knotted up the contest at 1-1 and forced the two sides into overtime.

The Tribe offense continued to struggle in the extra periods, managing just a single shot in the 93rd minute and then failing to mount a scoring threat until the end of the game.  Princeton managed four shots in the twenty minutes of extra time, but Casey came through for the Tribe with two saves, bringing her total to six for the day and 13 over the weekend.  The game ended in a 1-1 tie, the College’s fourth of the year and their sixth overtime contest in eight games.

Although they couldn’t notch a win, the Tribe played commendably in both overtime games. In addition the Tribe extended their unbeaten streak to seven matches, dating back to their season opening loss.

Out of the eight games the Tribe has played this season, six of them have gone into overtime. The Tribe have tied four of them and won just one of them.

The Tribe will get a well-deserved five days off before returning to action Saturday, when they travel to Harrisonburg to take on James Madison.