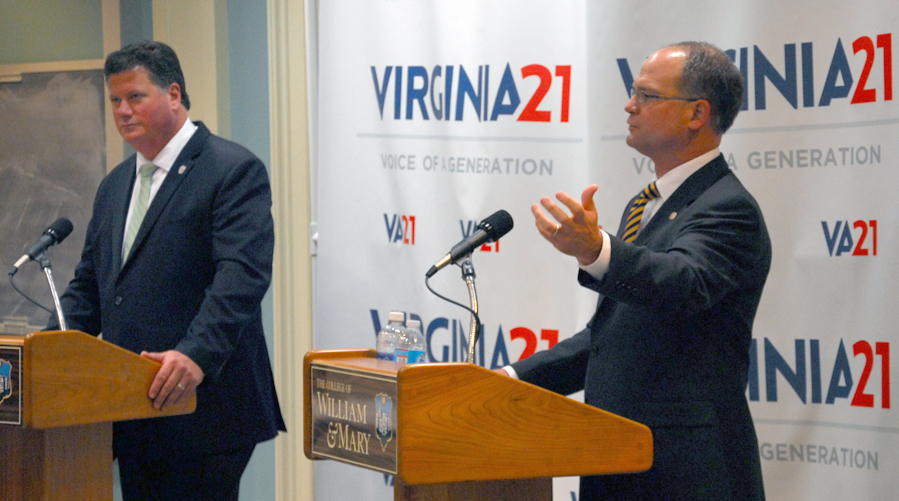 During last Wednesday’s debate between candidates for the 93rd House of Delegates, held on the College of William and Mary’s campus, Monty Mason ’89 and Delegate Mike Watson, R-93, both stuck to party lines while attempting to appeal to college voters.

Virginia21 and the Student Assembly sponsored the debate held in McGlothlin-Street Hall. The on-campus debate was the first and only debate held between Watson and Mason. Candidates took questions fielded by representatives from the SA, The Flat Hat, the Young Democrats and the College Republicans.

Throughout the 70-minute debate, both candidates focused on education and job creation in Virginia.

Mason, the Democratic candidate, graduated from the College with a degree in government. Since graduation, Mason has remained active at the College by serving on the Challenge 1 Strategic Planning Committee. He is also chairman of the Williamsburg Economic Development Authority and serves on the Greater Williamsburg Chamber and Tourism Alliance Board, the Historic Triangle Collaborative Economic Diversity Task Force and the development committee of Child Development Resources, as listed on his campaign website.

While outlining his platform, Mason emphasized the need to focus on education in Virginia. He also spoke about the state’s political climate.

“I’ve watched as [the Virginia General Assembly] has swung wildly to the right, particularly in the House of Delegates,” Mason said. “I believe that Virginia is a moderate state, and that pendulum will swing back in to the middle, but we have to have competent, qualified people to do it.”

Watson, the Republican candidate, has served as delegate in Virginia’s 93rd District since 2011. He reminded the audience of his history in the House of Delegates and his renewed focus on job stimulation and creation.

“I ran for office to use my experience as an entrepreneur and a job creator to encourage companies to move here, to expand here, and to create jobs in the commonwealth. I’ve done that,” Watson said.

Both candidates took the opportunity to appeal to voters at the College by outlining their plans for higher education funding. Both Watson and Mason cited the William and Mary Promise in their remarks.

Watson focused on reducing debt for recent graduates and said that he has spoken with College President Taylor Reveley about increasing the number of out-of-state students. Mason replied with the opposite opinion.

“This is a Virginia school, this should be a Virginia-oriented student body. But I am against the legislature applying a hard and fast percentage to higher education,” Mason said. “Every one percent of students, out of state versus in, represents about three million dollars to William and Mary.”

Both candidates went on to describe their plans to re-build Virginia roads, especially the Hampton Roads section of I-64. They agreed that improving the interstate was a top priority.

Although the candidates agreed on transportation, they spent the rest of the debate emphasizing what sets them apart.

“One stark difference [between me and Mason] is one of us talks about creating jobs and one of us has done it,” Watson said.

Watson cited the multiple jobs bills he has created and passed while in office. The delegate plans to continue fostering a supportive environment for small business creation in the district. Mason focused on innovation in creating jobs. He stated that Virginia needs to look to industries such as cyber-security, environmental development and tourism.

Watson took a strikingly different stance than his opponent in discussing reproductive rights.

“One dominant difference between my opponent and myself is that I believe that men should not be telling women what to do with their bodies,” Mason said.

In response, Watson defended his support for the Personhood Bill and spoke about his previous support of over-the-counter birth control.

The candidates also discussed their opposing views on healthcare.

Watson stands in firm opposition to the current law, whereas Mason looks forward to expanding coverage to citizens across the commonwealth.

“Everyone wants folks to be able to go to the doctor, but we have to do it in a way that won’t crash the system,” Watson said.

The candidates concluded by discussing funding in higher education. Both candidates spoke to the importance of economic development within the state in order to help Virginia’s public institutions.

“Going into November, I’m very optimistic about [the Democratic] party’s chances,” Young Democrats President Zachary Woodward ’14 said. “The government shutdown has underscored why the Tea Party candidates that the Virginia GOP has nominated are not fit to govern, and student turnout in Williamsburg will go a long way toward putting Monty Mason in the House of Delegates.”

Other students at the College stand behind the Republican candidate and alumnus.

“[Watson] successfully pushed for budget amendments to allocate funds toward the Brafferton Renovation and the construction of the fraternity houses,” College Republicans President Chandler Crenshaw ’14 said in an email. “He’s been a constant presence on campus, attending meetings such as Virginia21.”

Elections for the Virginia House of Delegates will be held Nov. 5.