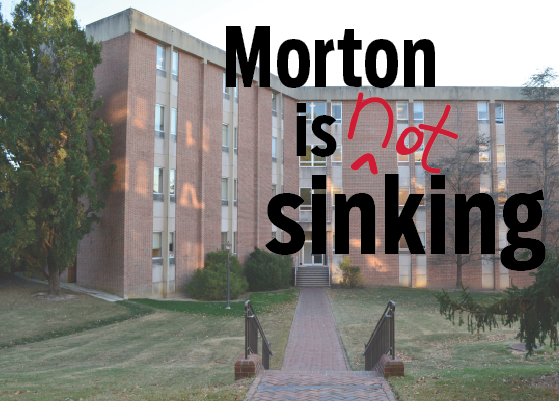 Government students can stop their worrying. The beloved Morton Hall is not sinking into the colonial swamp as legend says.

The current home of the College of William and Mary’s government department, Morton Hall, has been the center or a myth claiming that the building has been sinking since its opening in 1973.

“Morton is not sinking — not that I am aware of,” Facilities Management Director Wayne Boy said. “I think that the perception is, because we have done so much work in the basement and crawl spaces, that people think there is a foundation issue there.”

Aside from myths of sinking, Morton has weathered its fair share of problems over the years, including water damage in the basement and erosion under the foundation, which have been fixed by Facilities Management.

Morton is scheduled for renovation during the 2018-2020 biennium according to Facility Management’s Six Year Plan. Morton is currently 20th in priority out of 27 projects.

“I honestly believe a lot of people would like to see Morton go down and consolidated and replaced with a better building,” Boy said. It’s on the list, but those priorities change all the time.”

Beyond the rumors circulating about Morton’s possible sinking, the building has been a source of both love and hate on campus.

“People hate the building, but, truthfully, it’s not that bad [of] a building,” Boy said. “It’s certainly not loved.”

Some students on campus take on a cynical view regarding Morton. Dylan Frendt ’14 said he has taken at least half of his classes in Morton Hall. He is of the opinion that Morton should be re-evaluated and replaced.

“I think [Morton] is one of the most horrifying buildings I’ve ever seen,” Frendt said. “I want someone to take a wrecking ball like Miley Cyrus to Morton and just [push a] wrecking ball right through it and then build something completely new or make it green space.”

However, there is still some love left on campus for Morton. The government department has an entire page on the College’s website solely dedicated to its home, Morton Hall.

The page quips, “Every Government student since 1973 has spent time — done time? — in Morton, a building whose imperfection is so perfect as to make it a model in its own perverse way.”

Matthew Ferry ’16 also has taken classes in Morton. He takes on a more optimistic view of the building.

“I haven’t had pencils start falling off desks or any of my classrooms fall out of the building; until that happens, I’ll still be willing to use it,” Ferry said.

Love or hate aside, Morton will not be making its exit into the pits of campus any time in the near future.