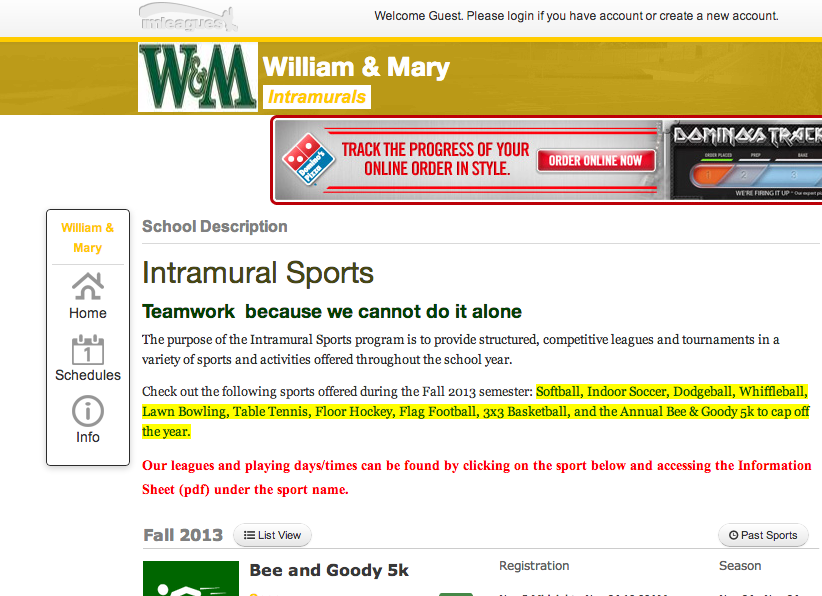 This semester the College of William and Mary’s Campus Recreation Center created a new online system to allow students to sign up for intramural sports on campus.

“This new system allows students to register for their intramural sport teams online,” Director of Campus Recreation Linda Knight said. “It also allows us to see where students are forming teams from. For example, say a large group of students sign up from Yates but not from Barrett, we can target Barrett’s Residence Life to reach out to those in Barrett to sign up.”

While the system has made it easier for students to register online, Intramural Supervisor Shelby Ziegler ’13 said it has also made it easier for the staff working with the program. Ziegler said she worked with intramural sports during her undergraduate years at the College, using both the now-defunct paper-based and the new online system.

“There is a vast difference between the online system (imleagues.com) and how everything was done previously,” Ziegler said in an email. “Before, we had all sign ups and information on paper and then had to transfer it to digital form. I remember sitting there one winter break with my big … literally converting all the hand written score sheets to a digital form. Although IMLeagues does have its flaws, it has made the system run so much smoother.”

However, with the new system in place, students must sign up before they play. In the past, students could pull friends to play right before their game if they lacked players, but now students have to be signed up online at noon before their next game to be allowed to play. Intramural Supervisor Marcus Starman ’16 deals with the system between playing on several different intramural teams.

“The idea behind it is that whoever is on the team is actually on the team,” Starman said. “It allows them to keep stats on the players and how many games they have played in. Also, if a player gets a concussion, we can put that in, and if they come in the next day, we can put a flag in the system that won’t allow them to play until they get cleared by a doctor.”

Ziegler said that, in general, the staff seeks to improve the intramural system as a whole by allowing students to communicate with each other.

“[The system] makes it possible for captains to send out messages to their team about games and … staff can send out alerts to captains or everyone on IMLeagues about game changes, rain outs or even when playoff brackets are posted,” Ziegler said. “As a player, you can go back and look at every team you have played on and the records of those teams. Also with our new Fusion system, we will be able to soon take credit cards for entries as well.”

The staff also hopes to continue to improve the system as it hashes out any minor problems that may accompany the change in programs, Knight said.

“We look to continue to improve intramural sports here at the College so that they are accessible for all students who wish to participate in them,” Knight said.