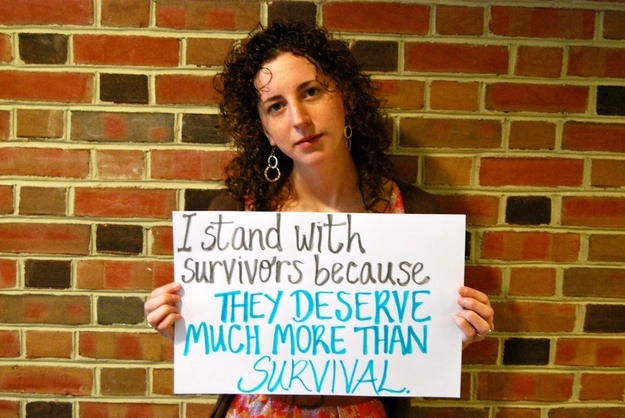 “It happened a few semesters ago,” she said. “I actually thought I knew him pretty well. I agreed to leave with him, but then when we got somewhere I realized how intoxicated I was. So I [said] ‘no’ multiple times and asked him to ‘please walk me home,’ but he didn’t listen.”

She is a senior at the College of William and Mary and her story is not uncommon.

“I didn’t think of it as rape at the time. I just knew something about it was wrong. I’m a person who prides herself on having control over my thought and actions. It was terrifying to lose that.”

Toward the end of last semester, Vice President of Student Affairs Ginger Ambler ’88 Ph.D. ’06 notified the community that an unknown assailant raped a different student half a mile from campus.

“It’s definitely a problem on this campus,” Andrew Zack ’14 said. “It seems that everyone knows someone who has experienced sexual assault.”

According to the 2012 National College Health Association survey conducted at the College, 2.1 percent of students responded affirmatively to the statement “someone had sex with me without my consent in the past twelve months.”

Of the same respondents, 0.4 percent responded affirmatively to the statement “I had sex with someone without their consent in the past twelve months.”

“Sexual assault is one of the most under-reported crimes,” William and Mary Chief of Police Don Challis said in an email. “Some sources indicate 10 assaults occur for every reported assault.”

To comply with the Title IX regulations, the College created its own Sexual Assault Response Protocol, providing student survivors of sexual assault with additional advocates on campus.

“What we’ve tried to provide is a culture so that if something happened to you, you are able to seek resources,” Senior Assistant Dean of Students and Director of Sexual Assault Services and Health Education Donna Haygood-Jackson said.

A recent study generated by The Washington Post, using statistics from the Department of Justice’s National Crime Victimizations Survey and FBI reports, demonstrates that for every 1,000 instances of rape, only 100 are reported. Of those reported, only 30 face trial, and 10 rapists are convicted and jailed.

In December, a jury in the Williamsburg-James City County Courthouse deemed a former College football player accused of rape “not-guilty.”

Garrison said in most instances of sexual assaults on college campuses, the victim knows the perpetrator. Alcohol is the primary predatory drug in such instances.

Various student groups at the College are dedicated to addressing sexual assault on campus.

Peer advocates such as Health Outreach Peer Educators, Every Two Minutes and Someone You Know work to prevent instances of sexual assault within the campus community.

William and Mary Stands with Survivors, a photo series dedicated to showcasing allies who support sexual assault survivors and who refuse to perpetuate rape culture, or the attitudes that normalize and sustain assault, was recently featured on Buzzfeed.

William and Mary Stands with Survivors founder Hannah Boes ’14 said she heard from many survivors after the Buzzfeed article was published.

“I definitely experienced a sobering outpouring of contact from survivors after the Buzzfeed article came out,” Boes said.

If a student at the College experiences an instance of sexual assault, they have the option to report the incident to the Office of the Dean of Students or to the William and Mary Police Department.

Challis said most survivors of sexual assault opt for the College judicial code of conduct process over the criminal process.

If a student chooses to report the sexual assault to the police, the College must report it to the larger College community as a product of the Clery Act. The Clery Act is a federal statute requiring all colleges that participate in federal financial aid programs to keep and disclose information about crime on and near their campuses. The College’s administration often reports such events via email.

“When it comes to distributing campus-wide notices about a reported sexual assault, it’s not a question of ‘importance’ to us, but rather a consideration of community safety,” Ambler said in an email.

Despite all these precautions and safety nets, sexual assault remains a problem in the College community.