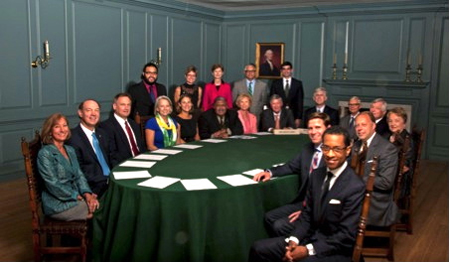 The Board of Visitors Committee on Financial Affairs discussed the budget estimate for the 2014-16 biennium of the six-year plan for the College of William and Mary.

In November, the budget was sent to the House Appropriations Committee for assessment, and former Gov. Bob McDonnell, R-Va., introduced a possible budget before his term ended.

This budget estimate will provide a platform from which Gov. Terry McAuliffe, D-Va., and the General Assembly may make additional adjustments. The General Assembly also received the proposed budget for the 2014-16 biennium for the Virginia Institute of Marine Science.

During his term in office, McDonnell vowed to continue support for higher education, and budget changes were made without any tax increases. However, the College did not gain back all the money that it had lost in prior years.

“During the biennium, we recouped about one-third of the $17 million we lost and this does not count expenses,” Vice President for Finance Sam Jones said.

Budget amendments for the 2014-15 school year came to a grand total of direct allocations of $1,547,480. This money is divided among several sectors, with $328,184 allocated for enrollment growth, $787,878 for base operations and to increase degree incentives, $259,096 designated for the six-year plan for eLearning, $100,000 allocated for undergraduate financial aid, and $72,322 designated for graduate financial aid.

These numbers do not change much in the 2015-16 school year except in regards to eLearning, where there is a proposed $89,110 increase in the budget for this project.

Employee benefits will be increasing by $970,000, which is a growth rate of 40 percent.

“They are only giving us about 30 percent of the 100 percent that we need in order to make these changes,” Vice Rector Robert Scott J.D. ’68 said. “It doesn’t really seem like we are benefitting from this.”

College President Taylor Reveley responded that the College has “been in the hole” for two years, due to the fiscal losses resulting from the still-recovering state of the economy.

During the 2014-15 fiscal year, the budget the College expected to have was composed of about $10.1 million of additional revenue, including an estimated $1.2 million that the College would receive from the state. However, McDonnell proposed an award of just over $1.5 million from the state with revenue of $12.2 million. The budget would still have to support a possible 6 percent monetary base increase in addition to a 3 percent bonus for state employees.

“There is always all this talk about productivity and merit, but the state gives bonuses to any creature still alive and breathing at a particular date, so long as said creature is not found to be doing blatantly unsatisfactory work,” Reveley said. “The state introduces the bonus gambit every now and then, but this is inherently bad public policy. If employees aren’t doing a good job, then take care of it, but you can’t continue to not pay state employees and then try to incentivize productivity with a binge of bonuses.”

Edward Flippen M.B.A. ’67, J.D. ’74, also raised the point during the meeting that many other colleges run million dollar margins. Jones said that because of the way the state operates, any money carried over to the new fiscal year has to be justified or it may be susceptible to taxes. In the private sector, the school does have a sitting fund for auxiliary purposes, or enterprises that exist to service students, faculty and staff.

“I am not interested in the private side,” Flippen said. “I think we really ought to build up our rainy day fund. This makes no sense.”

Joseph Montgomery of the Optimal Service Group of Wells Fargo Advisors also reported that, despite some losses, endowment is at an all time high of $78.1 million as of Dec. 31. This is an almost 36 percent increase — or $45 million — in growth from the $27.7 million of endowment the College held in 2002.

“2013 was a good year for stocks, and 50 percent of your portfolio is in stocks,” Montgomery said. “It was overall a very good year, especially for investors.”