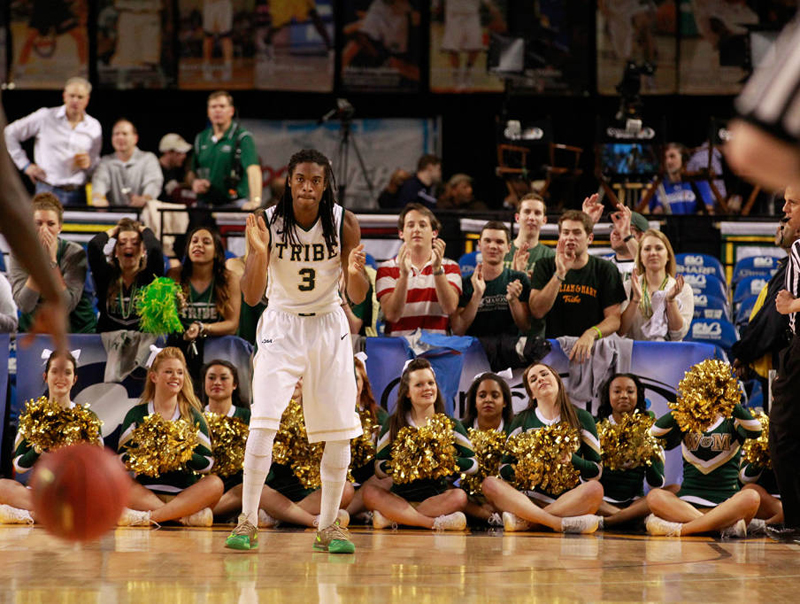 Come tournament time, the regular season only counts for context.

Although No. 3 William and Mary lost both regular season matchups against No. 2 Towson, the Tribe broke through with a heart-palpitating 75-71 Colonial Athletic Association Tournament semifinal victory over the Tigers.

“I thought it was an extremely high-level basketball game,” head coach Tony Shaver said. “I thought both teams played well; both teams made big-time shots. From a competitive nature, it’s hard to envision any guys playing harder than we did tonight. … I couldn’t be prouder.”

All nine Tribe players that stepped onto the Baltimore Arena court Sunday night contributed to the win, both defensively and offensively. The most crucial components were junior guard Marcus Thornton and senior forward Kyle Gaillard.

Despite struggling against Towson in the regular season, Thornton stepped out to the tune of 21 points, more than his aggregate scoring total from the teams’ two previous matchups.

“Semifinals — on the big stage, bright lights — [you have] got to get excited about things like that,” Thornton said. “I’m not the most emotional guy, but fighting out there with my teammates, making a final run, it’s exciting.”

Thornton set the tone for the Tribe’s offense, playing aggressively from start to finish. However, Thornton’s most memorable sequence came on the defensive end. Thornton’s strip of Towson’s back-to-back Colonial Athletic Association Player of the Year Jerrelle Benimon with fewer than 10 seconds remaining helped set up two free throws to ice the game. Following Thornton’s dislodging of the ball, sophomore guard Terry Tarpey made sure Benimon wasn’t able to regain control.

“[I] saw him driving, got my hand on the ball, and Terry came up with the steal. So just a great all-around defensive effort by the team to get the stop,” Thornton said.

Throughout virtually the entire game, the two teams were within five points of each other. If the Tribe showed spirit in Saturday night’s comeback win over the College of Charleston, it doubled down against Towson. Defensive pressure, a commodity that has waxed and waned during the season for the Tribe, was on constant display.

Gaillard excelled on both ends, finishing with an extremely efficient stat line of 12 points on 5 of 5 shooting and three blocks. Called upon to contain Benimon, Gaillard went toe-to-toe with Towson’s star and held Benimon to a relatively modest 18 points and five rebounds. Foul trouble, a problem that plagued the team captain in the teams’ previous matchups, didn’t bother Gaillard Sunday night.

“Kyle was tremendous tonight,” Shaver said. “If we gave out an MVP award, without watching the tape, it would probably go to him. He was terrific in his defense on Benimon tonight. You talk about a change in toughness, that’s a guy that’s playing on a new level for us right now.”

At halftime, the two teams were knotted at 38 apiece. Thornton led the first half effort with 13 points, but Towson guard Mike Burwell equaled Thornton’s output. However, Burwell would only score four points in the final frame as the Tribe’s defense started denying easy access to the paint.

Shaver said that a major point of emphasis during halftime was limiting the number of conceded offensive rebounds. The Tribe did just that, only allowing three offensive boards in the second half after giving up nine in the first.

“It was the difference in the game,” Shaver said. “We talked about during halftime that that was what was really holding us back. They got nine offensive rebounds in the first half. They finished with only three in the second half. We really “manned up” and did a great job on the glass in the second half.”

Towson sharpshooter Four McGlynn hit his first triple of the contest with just over 10 minutes to play, energizing Towson and the one-sided Baltimore crowd. On the next possession, Gaillard deflated Towson’s momentum with a corner three, just one of numerous key shots the senior made.

Towson’s size and strength was a serious matchup problem for the Tribe. Senior forward Tim Rusthoven’s incessant foul trouble further complicated the challenge, and Towson ended the first half with a 31-23 rebounding edge. But the Tribe’s sizzling second half shooting neutralized any advantage Towson gained on the boards. The Tribe hit 5 of 7 three-pointers in the second half.

The final minutes were a test of composure as much as of skill. With the Tribe up 73-71 and two minutes remaining on the clock, Towson couldn’t pull back into contention. Benimon turned the ball over twice as his team failed to score in the final two minutes.

Thornton’s decisive free throws were followed by rapturous celebration from the Tribe players. The team has been on the razor’s edge of going home during the entire tournament. but still stands and will play top-seeded Delaware tonight for the CAA crown.

The final of the CAA Tournament between Delaware and the College Tribe is set for a 7 p.m. tipoff. Winner gets to dance in style.