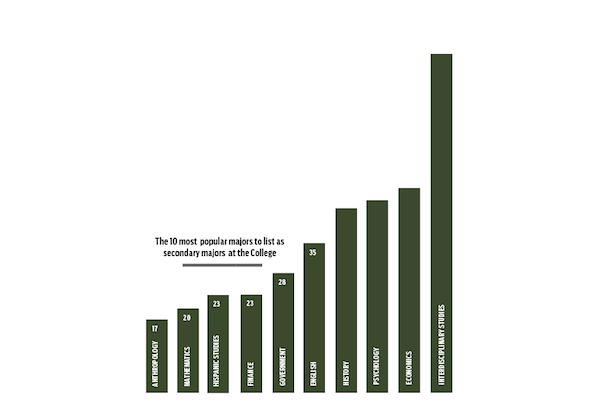 With an economy crawling toward recovery, employment across the nation has seen troubling times. According to the Chronicle of Higher Education, some college students are turning to the option of double majoring as a precaution against unemployment. Office of Internal Assessment and Effectiveness numbers indicate that 18 percent of declared majors — or 567 students — have also declared a secondary major at the College of William and Mary.

The numbers also indicate that the most popular secondary major is interdisciplinary studies, with 79 students declaring double majors in the field. Economics, psychology, history, English and government follow interdisciplinary studies in popularity. Among the least popular secondary majors at the College are physics, geology and American studies, each with just two double majors.

“Psychology is a popular major at almost all schools … there is a lot of versatility. You can go on to grad school, but you can go into medical school [and] business, too. You can jump off into other fields [with a psychology degree],” psychology department chair Janice Zeman said.

Like many of the most popular double majors at the College, psychology majors are required to take classes across disciplines.

“The major is very research-intensive. All students take two required research courses … the major is critical thinking coupled with math and a fair amount of writing in upper-level classes,” Zeman added.

Degrees categorized as interdisciplinary studies require a fulfillment of courses from at least three departments at the College, while still requiring understanding of an already-established discipline.

Roy R. Charles Center director Joel Schwartz said the various interdisciplinary studies at the College fall into two broad categories: those designed by the faculty and others which are self-designed by the student.

“There are two categories of interdisciplinary majors: One [includes] majors that have been designed by faculty groups — so environmental science and policy, that’s already sitting there ready for students to take just like a government major or English major. Neuroscience is sitting there with the requirements in the catalogs. In addition to the set degrees, you can also self-design majors,” Schwartz said.

According to the Charles Center, there are 12 structured interdisciplinary majors at the College, as well as the option for a self-designed major. The most popular interdisciplinary major is neuroscience, with 72 students in the Class of 2013 graduating with a degree in the subject, followed by international relations, with 62 students graduating with degrees in 2013.

Zeman said there are other reasons for the psychology majors popularity.

“We’re an awesome group of professors. We also have many research interests,” Zeman said.