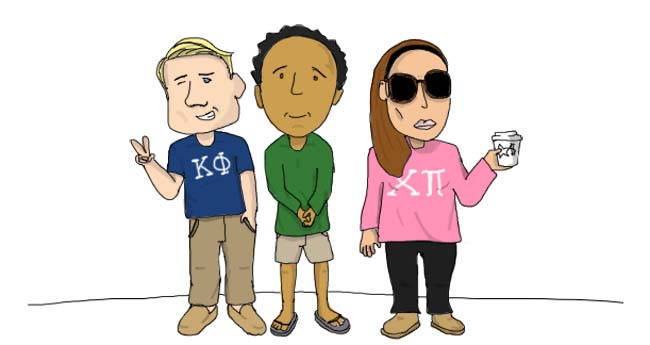 The first students whom most freshmen will encounter on their move-in day, microwave in hand and parents lagging anxiously behind, are their Orientation Aides. These bright, smiling, upbeat students will guide freshmen through the exhausting, overwhelming and perhaps disorienting process known as Orientation Week. Before incoming freshmen experience the College of William and Mary as students, they see it through their OAs. This underscores the need for a diverse set of OAs — for a variety of lenses through which freshmen can perceive campus life and the student body as a whole. In one way at least, OAs lack this diversity: Approximately 75 percent of the OAs selected for Fall Orientation 2014 and eight out of the fall’s ten Orientation Area Directors  belong to a Greek organization. During Fall Orientation 2013, approximately 77 percent of OAs were affiliated with social fraternities or sororities.

As eight of the ten Orientation Area Directors who interview applicants are in Greek organizations, potential for bias exists within the selection process. Some ways for potentially curbing this bias include reforming the selection process. First Year Experience must ensure that OADs are not in the same fraternity or sorority as any of their interviewees. Similarly, they should not allow OADs to interview anyone they know well. First Year Experience could implement a preliminary survey whereby interviewees are asked how well they know each OAD and whether they belong to the same Greek organization (if they belong to one in the first place). OADs would then interview those they either barely knew or didn’t know at all. Another option is to conduct a preliminary interview with an administrator who applicants would not know, which would remove some bias in the interview process.

Eliminating bias in the OA selection process will not entirely solve the problem, however, because it is likely that a disproportionately high number of Greeks apply for OA positions. First Year Experience needs to reach out to other student organizations across campus and encourage more students to apply. Students received three emails this year reminding them to apply — and those emails can be easily disregarded. First Year Experience should heavily promote their application before its due date, holding multiple events and interest meetings to reach a wider audience.

Greek organizations serve valuable philanthropic and social roles at the College, and we are not criticizing them. However, when freshmen enter the College and interact primarily with OAs involved in Greek life, they may receive  a misleading picture of the student body. While many freshmen know from college guidebooks and information sessions what percentage of the College’s students are Greek, their OAs can create a different impression. Freshmen may feel pressured to rush a fraternity or sorority if both of their OAs are Greek and if many of the students whom the OAs introduce to them are also Greek.

Becoming an OA is an extremely competitive process: First Year Experience selected only 100 out of 435 applicants this spring. Those who become OAs are no doubt extremely qualified and will serve freshmen well in their transition to College life. However, First Year Experience needs to avoid a potentially biased selection process and seek out a more diverse pool of student applicants.

Abby Boyle recused herself from this staff editorial to remain unbiased in her reporting.