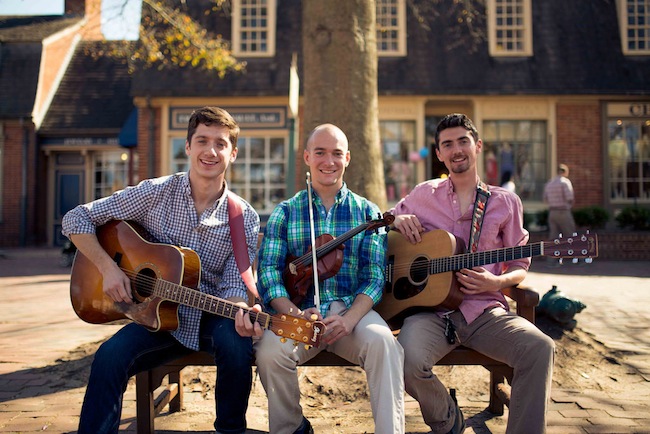 Donning College of William and Mary tanks, Griff’s Room Band took the Lodge 1 stage Friday, playing  a wildly fun 90-minute set. , They’ve certainly come a long way from their early days as an acoustic trio playing on the streets of Colonial Williamsburg. They now have a full-time drummer and bass player, filling out their jangly tunes into full-fledged folk rock jewels. Their two strongest musical weapons are the fiddling prowess of David Adley ’12 and the three note harmonies produced by founding members Adley, Liam Anastasia-Murphy ’13 and Michael Cammarata ’12.

Adley stood out throughout the show, but his most riveting solo came during their cover of Foster the People’s “Pumped Up Kicks.” Griff’s Room Band took this boring, overused pop song and gave it a whiskey-soaked vibe over which Adley tore into a fiddle solo straight out of an old Charlie Daniels record. If Foster the People sounded like this, I would buy their album. In addition, their incredible vocal precision gave every song a kind of early 60’s, bright-eyed pop appeal.

Their set mostly consisted of impressive original songs, many of which can be heard on their new EP, “Shut the Case.” With three singers at the helm and a roots rock ethos, The Avett Brothers are the most obvious comparison, but the songwriters of Griff’s Room Band are far from copycats. They also bear some resemblance to early Wilco albums like “Being There” and “Summerteeth” and to bands like Pavement and Built to Spill in their ability to harken back to classic song structures while throwing enough curveballs to make them feel fresh and exciting.

Their original songs struck a balance between simple, jaunty tunes and more dynamic song structures. On more than one occasion, they took a song that began with twinkling guitars and a soft violin melody, revved it up into a head-bobbing rocker, and then gracefully brought it back down to let Adley pluck his fiddle as if it were a mandolin over the warm, soft tones of the guitars of Murphy and Cammarata. It was impressive to hear such well-crafted songs coming from such a young band.

However, the show wasn’t just a pleasure for the ears: The band’s stage presence was flat out fun to watch. Sometimes they locked into the groove of a song, producing enough good vibes to get anyone through a tough week. At other times they let loose and showed everyone just how much fun they were having. The best example of this was their cover of Cee Lo Green’s “Forget You.” While performing their creative cover of the dance floor classic, they gradually strayed away from the clean version of the lyrics at the suggestion of a few members of the Stairwells in the audience. After each chorus, they were laughing and smiling as if they were back on DoG Street, all without missing a note. It’s nearly impossible for an audience to dislike a band when they’re have this good of a time performing. If you don’t believe me, check out some of their music for yourself.