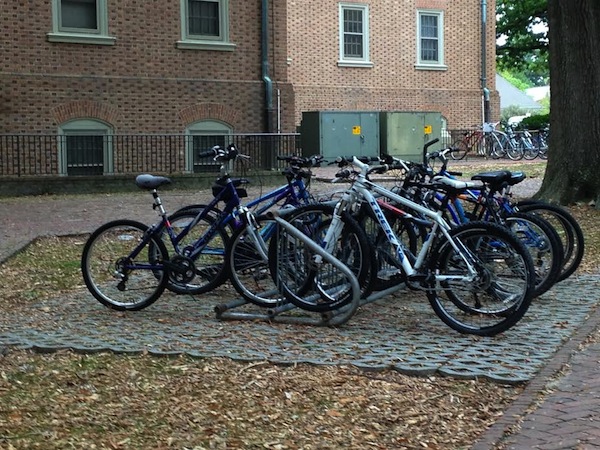 Bike safety is garnering more attention on the College of William and Mary’s campus due to efforts from Parking and Transportation and the Bike Initiative.

Formalized last year, the Bike Initiative is a partnership between students, faculty and staff to promote biking on campus and in the greater Williamsburg area.

“One of our biggest projects is ensuring that riders — whether they [are] students, staff, or faculty — bike safely,” Bike Ambassador Gabriel Morey ’16 said.

The Bike Initiative has already taken numerous steps toward a goal of better bike safety, including free helmet fittings for close to 200 people at the Sept. 6 Bicycle Sale.

“The distinction between fitting helmets and handing them out is important,” Morey said. “We actually made sure that each helmet was adjusted properly to ensure that it would work.”

Kinesiology 196: Bicycling Basics is a one-credit, 6-week course created by the Bike Initiative, meant to help promote bike safety though teaching basic behavioral and mechanical skills needed to be a safe cyclist.

“[The] maintenance component promotes safety, for bicycles in poor condition are unsafe to ride,” Morey said.

“This course will also be supplemented with topical brown bag series sessions to cover other specific cycling tips, maintenance issues, safety, and developing trends,” Horacio said in an email.

The class also includes helmet-mandatory group rides that provide a community in which students can practice and learn safe riding techniques. The Bike Initiative has additional group rides open to the public, such as an upcoming Oct. 4 ride to Chickahominy Riverfront Park.

As Professor of geology Christopher Bailey writes on his faculty blog, students at the College are prone to “going the wrong way down one-way roads, riding on the wrong side down two-way roads, rolling out into cross walks without looking, and even text messaging while riding.”

Bailey summarized his sentiments on student biking rather bluntly.

“Unfortunately many W&M students ride like idiots,” he said in his faculty blog.

Bailey’s concerns are echoed by William and Mary Police Department interim chief Captain Ed Schardein, whose most pressing recommendations are to ride as safely as possible.

“Always wear a helmet and follow the motor vehicle rules of the road,” Schardein said in an email.  “Common errors by bicyclists on campus are their failure to ride on the right side of the road in the direction of traffic, failing to stop at stop signs, and weaving between slow or stopped traffic.”

Bicyclists will only be stopped if someone is seen bicycling in an unsafe manner, according to Schardein. This includes wearing earphones or not having a bike light when cycling at night — acts that violate Virginia law.

Schardein also recommends that students invest in a strong lock to prevent theft.

“Bicycle theft is a problem on campus and we recommend always locking your bicycle to a stationary object, such as a bike rack,” Schardein said.

The Bike Initiative is coordinated through Parking and Transportation Services, and is no longer a function of the WMPD. While the Police Department addresses immediate safety concerns like reckless riding, the Bike Initiative is focused on engaging the College community on a more person-to-person basis and creating behavioral shifts over time.

“The ultimate goal of the initiative is to effect a cultural change on campus where safe cycling is not only viewed as a viable means of transport across campus but also a sustainable and effective way to go beyond campus borders,” Horacio said.