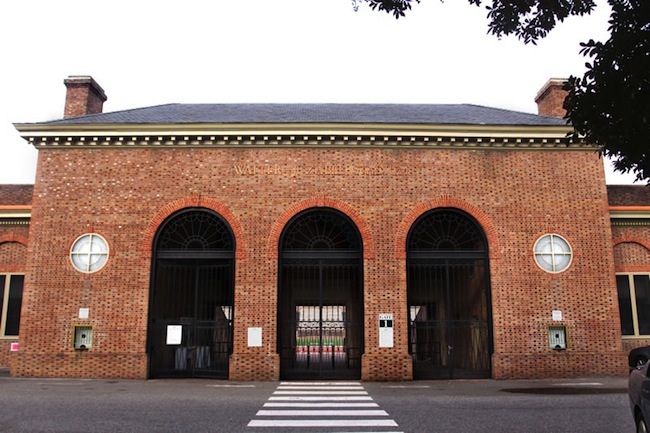 On a small campus of fewer than 7,000 students, it can be difficult to create the same tailgating culture that is so iconic at larger “Big 10” universities.  The College of William and Mary may not have the numbers to accomplish this, but what the College lacks in size, it makes up in community.

“Most schools have tailgating, especially bigger schools who have a lot of spectators,” said Tori Rice ’15, co-captain of the cheerleading team. “I hope tailgating will get students more engaged with the game and increase attendance.”

In April 2013, the Student Assembly passed a bill to reintroduce student tailgates for the 2013 football season. The bill outlined requirements for serving alcoholic drinks, designated areas for organizations and graduate students, and  set aside money for security and trashcans.  Organizations were awarded tailgate spots via a raffle.

“The Student Assembly-sponsored tailgates began last year, and they were an instant success,” said Daniel Ackerman ’15, the SA Senate Chair.  “By the third tailgate, attendance was higher than I could have ever imagined. This year we moved the tailgates to the other side of Kaplan to save a bit of money, while also allowing for greater attendance and student organization participation.”

In addition to Greek organizations, groups such as the International Relations Club and Tribal Fever have taken advantage of the tailgate spots.  Students are not the only ones who enjoy tailgating; pre-game events have annually been a draw for alumni, and not just during Homecoming.

“Tailgates allow a time for alumni to reconnect; it is also a place where you have a common bond across generations,” said Carol Dyke, Director of Alumni Events. “Students, parents, grandparents — all come together. My dream is to have the entire Tribe community come together in one location, similar to what we try to accomplish during Homecoming.”

Morgan Dronen ’14, co-captain of the cheerleading team, has also seen a great improvement in student participation.

“Over the past year, I have watched the William and Mary community become much more involved in football tailgating,” Dronen said. “In the past, tailgating has largely been made up of alumni and the surrounding Williamsburg community. The student tailgate held at William and Mary Hall has been a great way for students to become more active on game days. Not only has this created a fun and safe activity for students, it has also helped increase the number of fans attending the football games.”

The cheer team has its own tailgate, in addition to visiting all the surrounding tailgates before the game, accompanied by the pep band.

“This procession allows us to spread excitement and anticipation among those attending before they even set foot in the stadium,” Dronen said. “Our ultimate goal is to prepare the fans for an exciting game full of chanting, cheering and an overall great day of football.”

Ackerman thinks that the tailgates have been successful in improving student attendance.

Dyke has observed that fans are better connected before entering a game when they tailgate.  The Homecoming game against Villanova is expected to bring an even larger turnout of both students and alumni.

“We will continue to build on the All-Alumni and Reunion Tailgate which takes place in the Sunken Garden on Saturday afternoon,” Dyke said, “Under the large tent, we will have areas for the traditional reunion years to gather and in addition the tent holds a place for all alumni and friends to go and be with one another. We also have a Children’s Carnival, class reunion photos and WrenStock, which is comprised of alumni bands that want to get together and play at Homecoming. These bands were big on campus when they were here.”