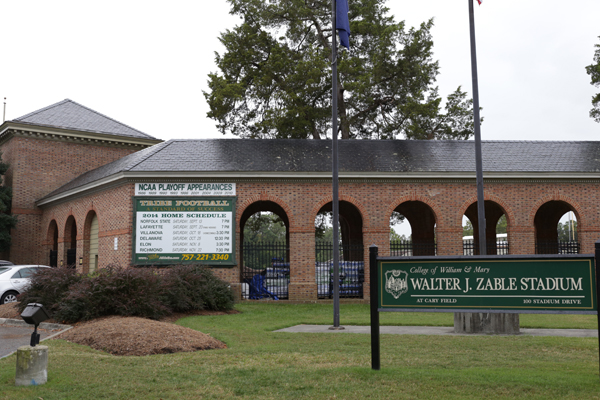 Tribe football fans may be sitting in style come the fall 2016 season.

The west side of the stadium, or the stands opposite the Zable parking lot, will feature a new tower marking an additional entrance to the stadium. Alongside the tower and entrance, elevators, game-day boxes and a press box will be added.

The game-day boxes will be available to rent while the new press box will be at a higher vantage point over midfield than the current press box.

“The overall goal is to improve the fan experience while also keeping the integrity of the structure,” Director of Planning, Design and Construction Wayne Boy said.

The renovations to the stadium will also increase the total permanent capacity from 8,200 seats to 10,700 seats, including Americans with Disabilities Act seating options at all price points. Certain seats in the lower-seating portion and seats in the overhang will feature a seatback, while seats in the upper area will not. In addition, renovation efforts will include wider seats and the installation of handrails.

“Zable is a beautiful venue but it is 79 years old and in dire need of repair. This renovation and enhancement will greatly improve the game-day experience,” Brian Whitson , Associate Vice President of Communications and University Relations, said. “When you consider the changes we are making, there is a lot to be excited about from a fan’s perspective.”

In addition to renovated seating in the west stands, the bathrooms will also be renovated and updated, and a small building will be added to accommodate concessions. There will also be an additional men’s restroom.

“I personally am excited about the plans. I’ve taken a look at the pictures of the the changes and they look amazing,” defensive tackle Grey Congo ’16 said. “I can’t wait until I have an opportunity to be the first team to play at the new Zable.”

Due to the Getty Foundation’s Heritage Preservation Plan, some architectural styles and pieces are required to remain in tandem with the rest of the College’s campus. Examples of these features include the bronze grills at the ticket windows, brick jack arches over the windows, grand round arch openings at the entry gates, and Flemish-bond brick design. Most buildings on campus feature the traditional design of one long slightly red brick followed by one shorter brick in a darker color.