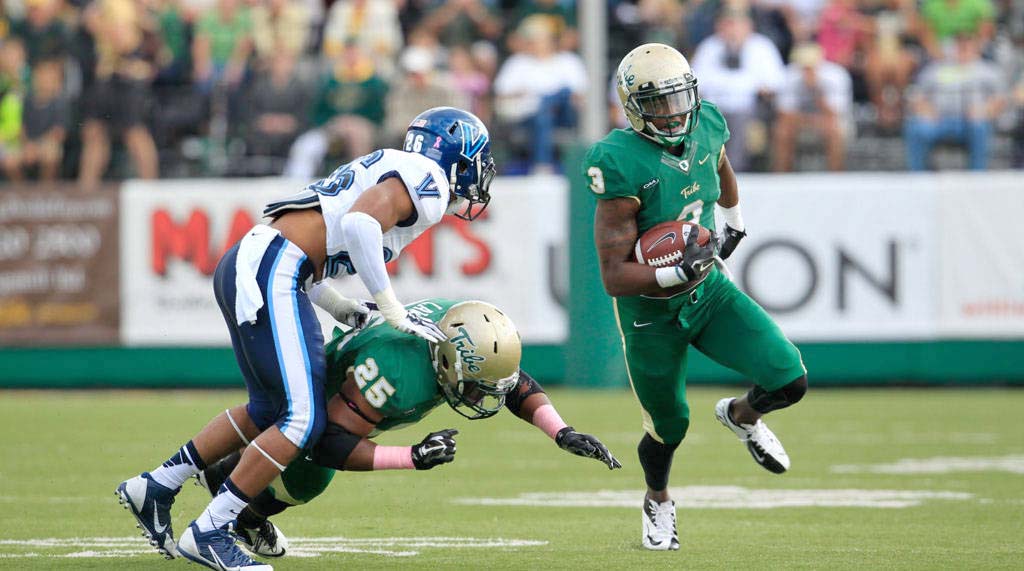 He had just finished the best game of his career, but sophomore quarterback Steve Cluley was clearly demoralized as he sat in the press room of Zable Stadium. His dejection was the only possible reaction Saturday night, as William and Mary lost a 35-31 heartbreaker to visiting No. 5 Villanova.

Over 10,000 fans packed Zable Stadium to celebrate Homecoming weekend, and the game delivered on nearly every level. The College (4-3, 1-2 CAA) and the Wildcats (6-1, 3-0 CAA) combined for nine touchdowns and 962 offensive yards in a game that thrilled from start to finish. The only missing piece for Tribe fans was a victory.

“It was a heck of a game,” head coach Jimmye Laycock said. “Obviously putting up that kind of offense is impressive, but it wasn’t enough. And we weren’t able to come up with a stop at the end when we needed to.”

The College came so close to victory. It held a 31-28 lead when it punted to Villanova with just under two minutes remaining in the game. But Villanova quarterback John Robertson pushed his team 69 yards downfield in just 50 seconds. The final dagger was a simple catch and run by Kevin Gulyas, who raced untouched into the endzone for a 35-31 Villanova lead. The Tribe’s final possession ended at the Villanova 32-yard line, as the clock expired and the Wildcats survived.

Despite the result, the Tribe offense excelled. Cluley carved up the Villanova defense with surgical precision, completing 21 of 32 passes for 350 yards and three touchdowns. Junior running back Mikal Abdul-Saboor and sophomore running back Kendell Anderson combined for 158 yards on 31 carries, and senior receiver Tre McBride dominated with 11 catches for 209 yards and two long touchdowns. The College’s offense looked every bit as formidable as Villanova’s, which leads the Colonial Athletic Association in points scored.

The Wildcats started fast, as Robertson completed his first six passes to lead Villanova to touchdowns on its first two drives. But the Tribe responded aggressively, as Cluley hit McBride for touchdowns of 35 and 56 yards to tie the game 14-14 early in the second quarter and keep the Wildcats from starting a rout.

“We were confident all week and we had a great week of practice. … I think the biggest thing for us was the confidence factor,” Cluley said.

The College nearly took the lead by driving deep into Villanova territory on consecutive possessions. But Abdul-Saboor and Cluley each fumbled inside the redzone to keep the score 14-14. Although the turnovers could have proved deadly, the Tribe defense forced Villanova to punt on three consecutive possessions. The College eventually took its first lead just before halftime, when Anderson’s 42-yard scamper to midfield keyed a frantic two-minute drill. Anderson finished the drive with a two-yard touchdown run that gave the Tribe a 21-14 halftime lead.

After halftime, Robertson sandwiched two touchdown drives around a Tribe field goal to propel Villanova to a 28-24 lead at the end of the third quarter. But the College did not relent. Junior cornerback DeAndre Houston-Carson tipped a punt to give the College the ball in Villanova territory, and Cluley quickly drove the Tribe to first and goal on the eight.

Then, once again, Cluley made the right play. He took the snap and patiently evaded immediate pressure, rather than forcing a throw into coverage. Cluley whipped a pass to wide-open freshman tight end Andrew Caskin for a touchdown, giving the College a 31-28 lead with ten minutes to go.

Of course, the lead was not to last. The College managed to hold off the Wildcats for nine minutes, but Robertson brought the Wildcats to 35 on a smooth drive with one minute remaining. The game ended with Cluley’s high arcing prayer of a pass from the Villanova 32, and the ball seemed to hang in the air for an eternity as Wildcat defenders converged around McBride. The star receiver, unstoppable all game, never had a chance at catching the Hail Mary. The pass fell incomplete, Villanova stormed the field and the Tribe’s upset bid was over.

Robertson, the CAA’s leader in passer rating, accounted for 330 offensive yards, four total touchdowns and no turnovers. Although Robertson faced constant pressure and tight receiver coverage from the Tribe defense, he intuitively avoided tacklers all day, repeatedly picking up yards with his legs and hitting his receivers downfield.

“Robertson is a hell of a player,” Laycock said. “He has a great knack of knowing where the pressure is and how to step up. He’s also a very good runner, … he’s a really good player and he makes [Villanova] go.”

Despite the result, one simply cannot call the loss a failure. The College executed its game plan to near perfection, dominating the line of scrimmage on both sides of the ball, playing its best offensive game of the year and holding the Wildcats a touchdown below their blistering scoring pace. The numbers don’t lie: the Tribe competed admirably Saturday, but its top five opponent played slightly better. All the Tribe can do is match this performance going forward and hopefully earn a more satisfying result.

The College looks to break its two game losing streak this Saturday, when it will host Delaware (4-3, 2-1 CAA) at Zable Stadium. Kickoff is set for 12:30 p.m.