The sun had set in Harrisonburg Saturday evening, and sophomore quarterback Steve Cluley was trying to keep William and Mary’s season alive. With 10 seconds remaining and the ball on the James Madison 23, Cluley took a final snap, but the Dukes promptly swarmed Cluley and sacked him to end the game. It was an anticlimactic end to a crushing defeat, as the College fell to James Madison 31-24.

For the Tribe, the stakes were high going into the contest. The College (5-4, 2-3 CAA) effectively needed to win its final five games to secure a spot in the Football Championship Subdivision, and the road matchup with the Dukes (6-3, 3-2 CAA) loomed as one of the Tribe’s toughest games. The College was looking for its first victory in Harrisonburg since 2004.

Still, the Tribe was in excellent position, taking a 24-13 fourth quarter lead after sophomore running back Kendell Anderson’s brilliant blocked punt return for a touchdown. But the Dukes patiently drove downfield for a field goal on their ensuing possession, then cut the deficit to 24-23 with Vad Lee’s 20-yard touchdown pass to Daniel Brown. The Tribe suddenly had the ball with nine minutes left in the game and desperately needed either a score or a defensive stop.

The College couldn’t earn either. Cluley drove the College to the JMU 21 yard line, but missed a throw to junior running back Mikal Abdul-Saboor to bring up fourth down. Freshman kicker Nicholas Dorka, filling in for senior kicker John Carpenter, missed a 38-yard field goal, giving the Dukes the ball on their own 21.

From there, the Tribe defense fell apart, as Lee methodically moved the Dukes down the field. The deathblow was on third-and-1 from the Tribe 9-yard line, where JMU sent out five receivers and an empty backfield, and Lee knifed a touchdown pass to DeAndre Smith. After a two-point conversion, JMU completed its rally with a 31-24 lead. As the College’s last minute drive stalled, the comeback victory was sealed.

Despite the result, the game actually began favorably for the Tribe, as it drove to the JMU 6-yard line to take a 3-0 lead on Dorka’s field goal. After the Dukes tied the game at 3, freshman receiver DeVonte Dedmon returned a kickoff 77 yards, setting up Abdul-Saboor’s four-yard sweep for a touchdown that gave the Tribe a 10-3 Tribe lead.

After the teams exchanged punts for the next eight possessions, the momentum shifted. Cluley led the College to the JMU 38 late in the second quarter, but missed open senior receiver Sean Ballard on third-and-5. The Tribe punted, and the Dukes hurried down the field to cut the Tribe’s lead to 10-6 before halftime.

The Dukes appeared to seize control of the game when wide receiver Brandon Ravenel capped off an 80-yard drive with a 23-yard touchdown, putting the College at a 13-10 deficit. But the Tribe struck back without hesitation, as Cluley completed four of five passes and found Dedmon streaking up the middle of the field for a 30-yard touchdown, giving the Tribe a 17-13 lead.

After JMU’s next drive stalled, the game took a surprising turn. As JMU’s Gunnar Kane attempted to punt to the Tribe, Anderson tore into the backfield untouched. Rather than blocking the punt, he caught the ball as it left Kane’s foot and barreled into the end zone. The play was a stunning display of instinct and athleticism that gave the College a 24-13 lead at the start of the fourth quarter. 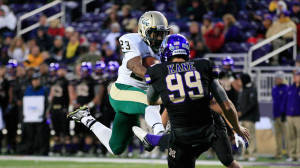 However, it wasn’t enough, and it’s difficult to pinpoint exactly why the Tribe lost. Abdul-Saboor battled for 124 yards on 29 carries, consistently moving the chains as he has all year. Cluley finished with 14 completions on 25 attempts for 172 yards and a touchdown pass, but he missed multiple throws in the first half that kept the Tribe from pulling away. The Tribe’s game plan was more aggressive, featuring play-action passes and deep attempts on first down, but the offense still fell a score short.

The defense was more confounding. Although the College dominated JMU’s offense for much of the game, it was helpless against Lee on the Dukes’ 18-0 run. Lee finished with 324 yards and three passing touchdowns, and regularly kept plays alive against heavy Tribe pressure. Of JMU’s 445 offensive yards, 197 came in the second half. Ultimately, the College needed either one touchdown on its final three possessions or one defensive stop on JMU’s final three possessions. It came away with neither.

The loss struck a harsh blow to the College’s postseason hopes. While a win would have moved the College to fourth in the Colonial Athletic Association, the Tribe instead sits at eighth in the hierarchy. Three games remain in the College’s season, but this heartbreaker in Harrisonburg may prove to be the moment in which the Tribe’s hopes for a place in the FCS playoffs officially collapsed.

The College takes the field against Elon Saturday at Zable Stadium. Kickoff is scheduled for 3:30 p.m.