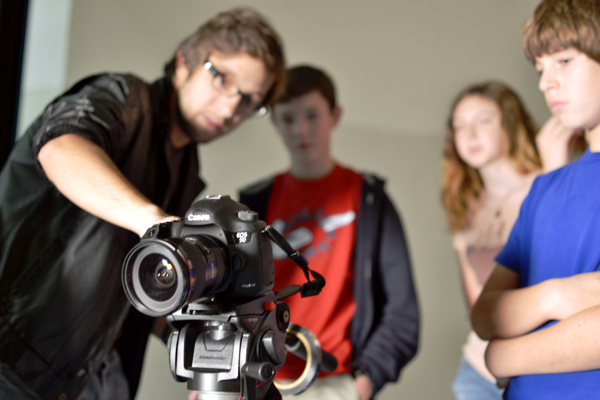 This year, the College of William and Mary Global Film Festival’s theme is renewal. In the weeks leading up to the Feb. film festival, film and media studies assistant professor and William and Mary Global Film Festival Director Tim Barnard and his students are putting on events for the College’s students and Williamsburg community.

Saturday, Nov. 1 marked the first of three Saturday workshop series, “Do-It-Young/Film-It-Yourself,” for 3-12 grade students in Williamsburg. A collaborative effort between the Earl Gregg Swem Library Media Center, the Williamsburg Area Arts Commission, Canon Virginia, Inc. and the W&M Global Film Festival, the goal of the workshops is to teach kids how to make films.

Students are split into groups by grade with two College film students as mentors in each group. Throughout the three sessions, these College students teach the participants about the pre-production, production and editing stages of filmmaking. By the end of the third workshop, each group will have created a short film.

The assignment for the students is to create a film using the prop of a recycled wheel and the theme of renewal.

A group of juniors at Jamestown High School tied the idea of renewal into their film by talking about how a girl rediscovers her interest in photography.

“It represents renewing that spark of passion,” high school student Gabby Rente said. “I am learning a lot from this workshop. It’s not like you can just pick up a camera. I’ve learned it’s a problem-solving experience.”

Rente wasn’t the only student who got something out of the workshop.

High school junior Nick Rose has participated in the workshop twice before as a student, and managed to win prizes in The Global Film Festival Student Film for two years running. This year he came back as the only high school, non-College student to work on the other end of the workshop as a mentor.

“It’s really cool to work with the kids and see how much creativity comes out of them,” Rose said. “Little kids are the ones with the craziest ideas, so its fun to work with them and see what they come up with.”

This won’t be the last time these wheels are in use.

As part of their “Keep the Wheels Turning” project, Barnard’s Documentary Project class will distribute these tires to students at the College and to the greater community Nov. 9 at the Williamsburg Art Festival and Nov. 15 at “America Recycles Day” on the Sunken Garden. Groups have until Jan. 23, 2015 to finish their projects and the winners will receive cash prizes both for themselves and for an environmental charity of their choice.

The wheels will be on display at the 2015 W&M Global Film Festival from Feb. 19-22. The festival will show documentaries ranging from French films to family matinees. All will incorporate the theme of renewal.

“We chose the theme of ‘Film and Renewal’ because we wanted to go with something that would reflect the issues of today,” Barnard said. “These environmental times are a seeming battle between pessimism vs. optimism, between giving up and stepping up. The combination of the “Re-” and “New” fit that bill. It embraces the past and the future and makes the two of them work together.”