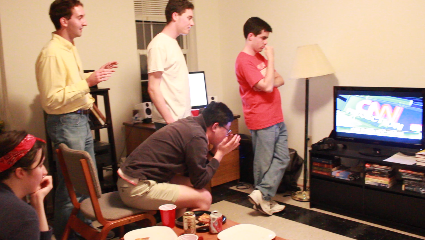 Another midterm election has come and gone, and the results are clear: the Republican Party candidates have won this round.

At the end of Tuesday, Nov. 4, the GOP had successfully maintained their majority in the House of Representatives in addition to winning seven new seats in the Senate. This puts them squarely in control of both houses of Congress for the first time in eight years.

This midterm was also characterized by the lowest voter turnout since the 1940s, with voters aged 18 to 29 making up only 13 percent of the electorate.

Newton Family Professor of Government Larry Evans said that this kind of turnover in Congress is not uncommon for midterms in a president’s second term.

“I thought the race turned out fairly typically for a six-year-itch midterm election,” Evans said in an email. “The party of the incumbent president lost a number of seats as expected.”

In Virginia, the race for the Senate was closer than predicted. Incumbent Mark Warner (D-Va.) won the majority with a margin of less than 1 percent. Since the vote was so close, Republican opponent Ed Gillespie has not yet conceded the race and is waiting for a recount.

For voters in Williamsburg, the House of Representatives’ ballot offered a choice between incumbent Rob Wittman (R), Norm Mosher (D) and independent Gail Parker. Wittman won the race with a 63 percent majority.

According to Evans, voting in Virginia reflects the larger national trend of a divided electorate.

“The electorate continues to be deeply polarized along partisan lines,” Evans said. “In many ways, Virginia looks like the rest of the nation with pockets of deep red and blue. One striking characteristic was generalized dissatisfaction with governing institutions and continuing concerns about the economic recovery. My guess is those trends will continue.”

This midterm was also characterized by the lowest voter turnout since the 1940s, with voters aged 18 to 29 making up only 13 percent of the electorate. Evans said students should take more of an interest in elections, which influence policies directly affecting them.

“In many ways, Virginia looks like the rest of the nation with pockets of deep red and blue. One striking characteristic was generalized dissatisfaction with governing institutions and continuing concerns about the economic recovery. My guess is those trends will continue,” Newton Family Professor of Government Larry Evans.

“Lurking behind the partisan polarization are deeper generational issues that affect students a lot, especially the structure of entitlement programs like Social Security and Medicare,” Evans said. “Student loans and college financing also will be agenda items on Capitol Hill for a while. So there is a lot at stake for 18- to 22-year-olds in contemporary politics. Not to mention the entertainment value.”

Student interest groups on campus were active on Election Day, supporting their candidates, encouraging students to vote and closely monitoring the results. Chairwoman for the College Republicans Kathleen Gayle ’15 said the group was pleasantly surprised by the outcome of the Virginia Senatorial race.

“Everyone thought that Warner was going to walk away with the election, but [Gillespie] obviously showed that he could mobilize Republicans in Virginia, and I think that that’s promising for the future,” Gayle said.

President of the William and Mary Young Democrats Elise Orlick ’15 said that, although the overall election did not go their way, they are looking on the bright side.

“Obviously we are a bit disappointed overall with the races, but mostly we are just proud of our candidates,” Orlick said. “Mosher lost his congressional race, but I think he was a very strong candidate. He was well qualified, and we are happy that he put himself out there for what was always bound to be a tough race.”

With the polls at a close, Orlick said attention will now turn to the next election.

“We are definitely looking forward to the next national elections in 2016,” Orlick said. “At the moment, though, we are looking to our state house elections. Delegate Monty Mason and our state senator John Miller will both be up for reelection in 2015.”