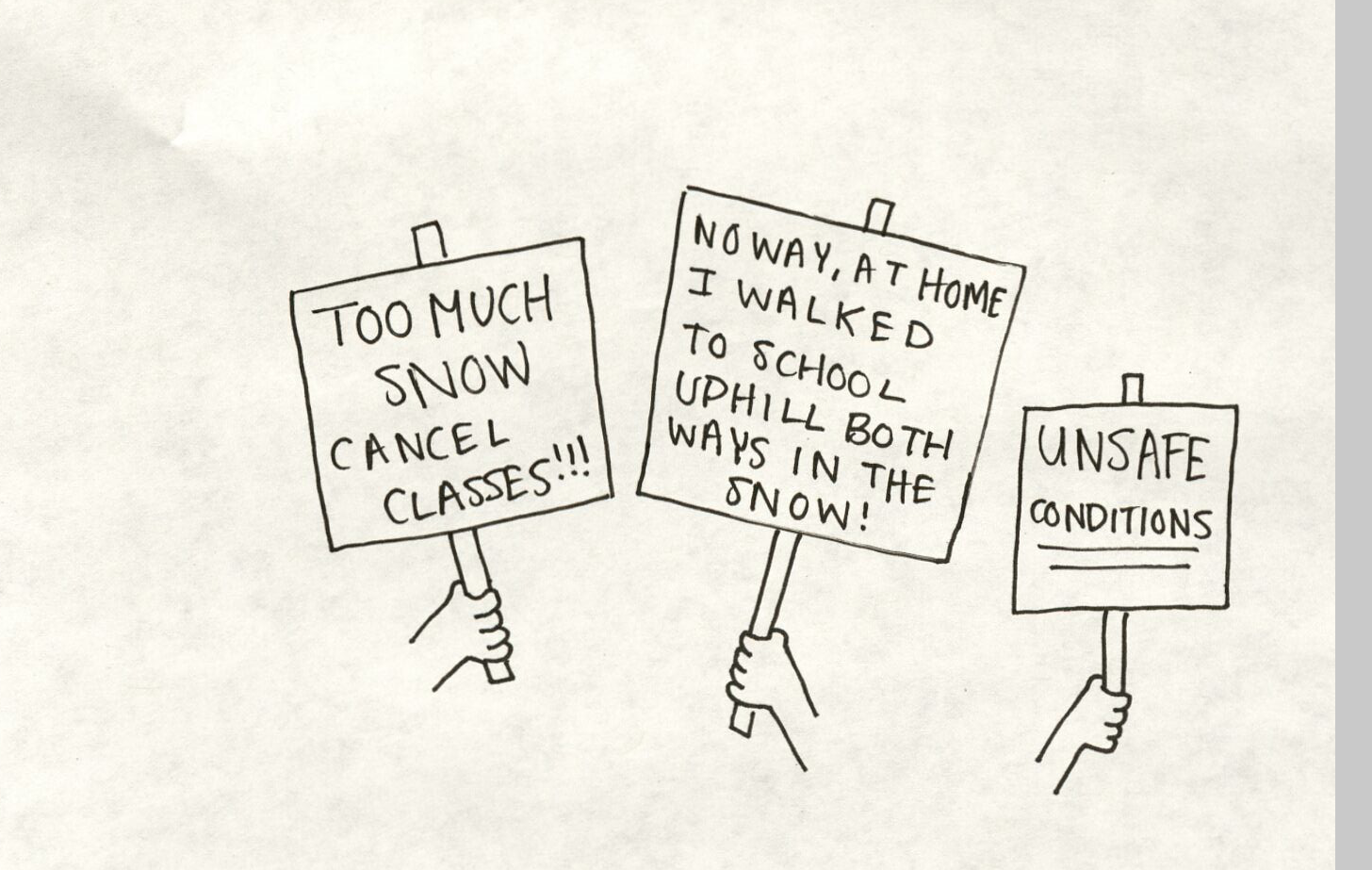 Michael Halleran has the most difficult job at the College of William and Mary. He is the guy who decides whether or not to cancel class due to inclement weather. Or, in other words, he is Public Enemy Number One. “What’s so hard about that?” you plead, “Just cancel school, Halleran.” But let’s take a step back and truly consider every factor involved in making decisions about inclement weather.

First, what is “inclement weather?” Similar to “the fiscal cliff” or “studies show,” it’s one of those overused, reactionary buzz-phrases that people use to incite public fear, but which doesn’t actually mean anything. Technically, inclement weather is a fancy way of saying it’s going to snow or rain. It has to be significant, but that’s a relative term. In Boston or Buffalo, inclement weather means that they will probably never see the light of the sun again. In Colonial Williamsburg, inclement weather means it snowed four inches yesterday, but today there’s a high of 70 degrees. Now, imagine having to use this widely defined term as the sole reason to close an institution that serves over 6,000 people on a daily basis. One student from Alaska is laughing at you for jumping the gun, and another student from Alabama is emailing you out of fear. If you have Halleran’s job, you simply cannot win.

First, what is “inclement weather?” Similar to “the fiscal cliff” or “studies show,” it’s one of those overused, reactionary buzz-phrases that people use to incite public fear, but which doesn’t actually mean anything.

Furthermore, Halleran’s job requires him to predict the weather. If you’ve watched the local news lately, you’ll know that actual meteorologists can’t even do that. Weathermen are allocated approximately three minutes to explain what the universe is about to throw at us before the news cuts to a clip of a turtle eating a burrito. When meteorologists predict snow for the next day, there is usually a heat wave. It seems like there is no one we can genuinely trust. Now here comes poor Michael Halleran, who has to suffer through the corny jokes of a one-hour newscast just to hear those three inaccurate minutes of the weather forecast, in order to make sure that we don’t catch a chill on our five-minute walk to class.

Finally, if we put all of this in the proper context of Colonial Williamsburg, or Virginia, or even the South, it only makes the job of dealing with inclement weather even harder. Although it has snowed each of the four years I have been at the College, I think we have an idealistic view of the South as being perpetually warm or tropical. While this isn’t the tundra, we’re not in the Dominican Republic either, my friends. I have seen more snow than toucans here, and yet every time a little bit comes, we act as if Rebecca Black just won Album of the Year at the Grammys — like the impossible is happening. Because of this mindset, the amount of resources that we have to deal with snow and ice is extremely limited. I honestly have no idea, but if I were to take an educated guess, I’d say the College owns four shovels, two bags of salt and one snow blower. The guy who operates the snow blower likely lives in Norfolk and can’t get to campus when it snows.

So, what can Michael Halleran and his team do? He’s like President Barack Obama in this situation, forced to make a decision that will upset some and please others. We students are Congress, constantly demanding answers and immediate action. You all are lucky it wasn’t me handling this situation — I don’t do well with ambiguity. School would not have been cancelled until I saw with my own two eyes that people were struggling to get to class. Besides, I had just gone to sleep after binge-watching Beyoncé music videos when I received the 4 a.m. text alert, and I know I’m not the only one. We’re lucky we have Halleran and an administration that kindly takes into account all of these factors in order to ensure the safety of all the faculty, staff and students. Let’s take a collective deep breath, stop complaining, and be thankful that someone else has to make all these hard decisions on campus.

Zoe Johnson is a Confusion Corner columnist who once used a clip of a turtle eating a burrito to predict the next month’s forecast.