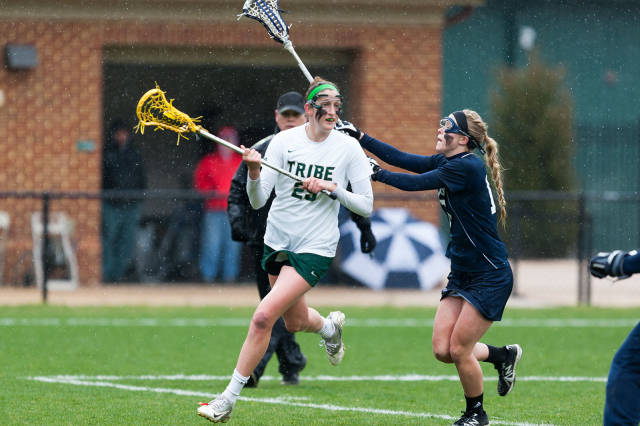 Just under two minutes into the game, the Longwood Lancers (1-5, 0-0 Big South) notched the opening goal to take a 1-0 lead on William and Mary. Yet the single-goal margin was destined to be both the largest and only lead of the contest for the Lancers, as the Tribe stormed back with a vengeance to claim a 20-9 victory in Farmville, Va. on Wednesday, the first victory of the season for the College.

Though the first Tribe possession ended in a turnover, the College started strong in draw controls, collecting the first four. Senior midfielder Amanda Johnson knotted up the score at 1-1 at 27:27. Freshmen midfielder McKinley Wade then found the back of the net unassisted at 26:45, creating the first Tribe lead of the 2015 season after a cumulative 243 minutes of regulation time at a tie or deficit.

With the newfound status of leading in a game, the Tribe decided to push the advantage further, as sophomore midfielder Shannon Quinn fired in her fifth goal of the season off an assist from junior midfielder Michele Goss. A tally by freshman midfielder Danielle Palamucci, assisted by senior attack Kaleigh Noon, followed soon after. Nine minutes in, and the Tribe appeared poised to runaway with an ever-growing 4-1 lead.

However, the College (1-4, 0-0 CAA) wasn’t quite able to distance itself from the Lancers. Longwood capitalized on a Tribe turnover, then again on a fast break to cut the score to 4-3 at the 19:16 mark. Quinn cranked out an early hat-trick for the Tribe in response, but the Lancers successfully exchanged free-position shots for points, tying the game at 6-6 with 6:20 left in the half.

The 2015 squad for the Tribe has fit the description of a second-half team, as 58 percent of its goals have come in the second period. However, frustration at constantly playing from behind combined with the Lancers erasing the Tribe’s first lead of the season, impelled the Tribe begin the usual second-half surge early.

After the tie at 6-6, the College thundered back into the lead, claiming nine of the next 10 draw controls, establishing a veritable monopoly in time of possession.

A goal by junior attack Zoe Boger, assisted by freshman attack Abby Corkum, opened the floodgates at 5:30. The Tribe continued to capitalize on its many possessions, pummeling the Lancers with a 3-0 run to end the half. The locker room provided little respite for Longwood, as Johnson rifled in a shot just 18 seconds into the second half to continue where the Tribe left off. The 3-0 run extended to a 6-0 spree at 27:47, with the score at 12-6.

The Lancers fought back, but were only able to add a token score intermittently between Tribe scoring runs. The Tribe answered a Longwood goal at 26:46 with two goals over the next three minutes. Another Lancer score at 17:02 received a reply of a 5-0 run for the Tribe to push the College to a 19-8 lead at the 2:16 mark.  Longwood added one more for respectability, but the game was long decided, as the Tribe had the final goal and final word in the 20-9 victory.

The 18th goal for the Tribe, by freshman midfielder Meghan Brophy, started the running clock with the 10-point lead at 18-8, as the lacrosse equivalent of a mercy rule begins with double-digit margins. Wednesday’s win marks the first time the Tribe has been on the upside of the running clock since 11 games ago, dating back to the 2014 season’s 16-3 victory on March 26, which also happened to be against Longwood. To contrast, the Tribe has faced the running clock as the losing squad in three of its four previous contests this season.

Quinn led the College with 4 goals, closely followed by Johnson’s three. Senior midfielder and captain Ellen Shaffrey tacked on two, as did Brophy, Goss, Palamucci, and Wade in a fireworks display of offensive production.

Up next for the Tribe is its fifth consecutive road match, this time against Old Dominion University this Sunday at 1 p.m.