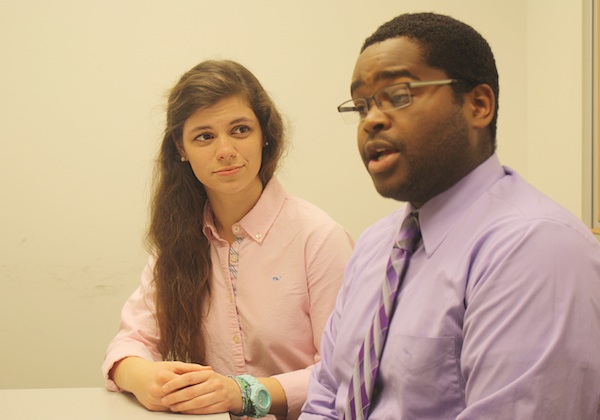 Three years ago, Claire Etheridge ’16 and Marcell Crawford ’16 were elected to the Botetourt Complex’s Hall Council. Next year, they hope to continue their partnership by becoming the College of William & Mary’s next Student Assembly president and vice president.

While neither Etheridge nor Crawford has previous Student Assembly experience, both have held leadership positions. In addition to serving on multiple hall councils, Etheridge is secretary of Amnesty International, while Crawford is treasurer of the Residence Hall Association and vice president of Sigma Alpha Epsilon.

The pair said that they are running not only to enact meaningful and real change in the Student Assembly, but also to add transparency to a student government body they feel has become too shielded from the student community.

“Last year, I followed the SA elections,” Etheridge said. “The really big thing that I noticed was there was a lack of specifics. They had these big themes for their campaigns, but there weren’t any concrete details, and I thought, ‘What does SA do that is concrete, that is really working for the students?’ I thought, I could do that, I could come up with concrete plans.”

Crawford also discussed the lack of visibility in the SA, something he hopes to change if elected.

Crawford and Etheridge have four main problems they hope to tackle if elected: diversity, community engagement, transparency and physical and mental health.

“We didn’t want to do a three-pronged approach, a three buzzword type of campaign,” Crawford said. “We really wanted to emphasize … [that] you can’t progress unless you work with the community around you and it is a collaborative effort.”

In terms of community engagement and transparency, Etheridge and Crawford discussed the SA’s handling of the dissolution of the Undergraduate Council.

“The changes don’t change the day-to-day operations of SA, but what really concerned me was the lack of communication with the Graduate Council before [the dissolution],” Crawford said. “[The SA] should make sure [to communicate] before making drastic changes, maybe by doing a climate survey of the campus to see how they would feel about a change like that happening.”

If elected, Etheridge and Crawford said that they plan to increase transparency by holding weekly office hours and placing a suggestions box in Sadler Center or Earl Gregg Swem Library. They also said that they hope to speak with students in person more than via social media as it only reaches a set number of followers out of the thousands of students on campus.

As for physical health, Etheridge and Crawford have several goals: Increase the presence of a newly founded bike initiative on campus, create a mini-gym in the basement of One Tribe Place and put up maps showing exercise trails.

Finally, when it comes to mental health at the College, the Counseling Center is at the top of Etheridge and Crawford’s priorities.

Crawford agreed with Etheridge, pointing out that practices such as having a graduate student record counseling sessions can make students uncomfortable. He hopes to hold public forums regarding the center and discuss issues with the counseling center and the administration directly.

Moving forward, Etheridge and Crawford said that they plan on reaching out to students by visiting organizations, tabling and holding campaign events to target those who are still undecided.

“We are more focused on the details than on the flash and bang,” Etheridge said. “We both have leadership experience, and I think that would transfer well. I think that not having any SA experience could actually benefit us because a lot of the time when you come into a system from the outside and you ask, ‘Why do we do it this way?’ people say, ‘That is what we have always done.’ I think that we could see potential gains in efficiency.”