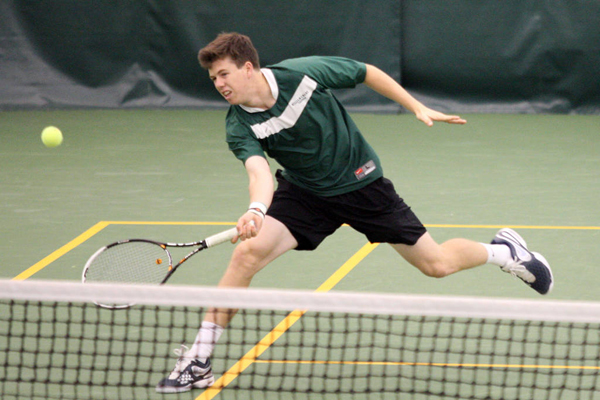 William and Mary fell 7-0 to the No. 4 Virginia Cavaliers in Charlottesville Saturday. The College now holds a 12-11 record on the season, while U. Va continued a six-match winning streak, improving to 15-3. Virginia now holds a 33-1 series record against the Tribe. Last year, Virginia won 6-1.

Virginia (16-3, 8-0 ACC) dominated the doubles play, winning all three matches to garner the doubles point. Seniors Aaron Chaffee and Will Juggins fell 8-2 in the No. 1 doubles position to No. 54-ranked Virginia duo of Thai-Son Kwiatkowski and Mac Styslinger. In the second position, sophomore Addison Appleby and freshman Lars de Boer lost 8-1. Freshman Christian Cargill partnered with sophomore Damon Niquet to lose 8-2 at the No. 3 spot. Overall, the Tribe (12-11, 1-0 CAA) won just five games to the Cavaliers’ 24, a 19-game margin.

By the third singles match of the day, Virginia’s Henrik Wiersholm won 6-2, 6-2 in the No. 5 spot over freshman Alec Miller, allowing U. Va to clinch the overall victory. Virginia continued its sweep on the singles side, winning all six matches in straight sets. At No. 2, Appleby posted the closest finish, losing 7-5, 6-3 to Kwiatkowski, who is ranked No. 10 nationally. Although Appleby was down in the first set, he evened the score at 5-5; however, Kwiatkowski got the break to win the first set 7-5. Kwiatkowski then handily won the second set to win the match. Appleby posted the Tribe’s largest discrepancy between the first-set score and the second-set score.

De Boer lost his No. 4 singles match by the greatest margin, posting a 6-1, 6-2 score against Virginia’s Styslinger, ranked No. 112 nationally. Over the course of the six two-set matches, not one member of the Tribe improved his first-set score in the second set.

Next up for the College are two home matches this week at the Millie West Tennis Center.

First, the Tribe will face Liberty Wednesday at 4 p.m. Then the College faces rival No. 70 Old Dominion at 2 p.m. Saturday. The Tribe will honor its three seniors, Chaffee, Juggins and Zach Braig during the home matchup.