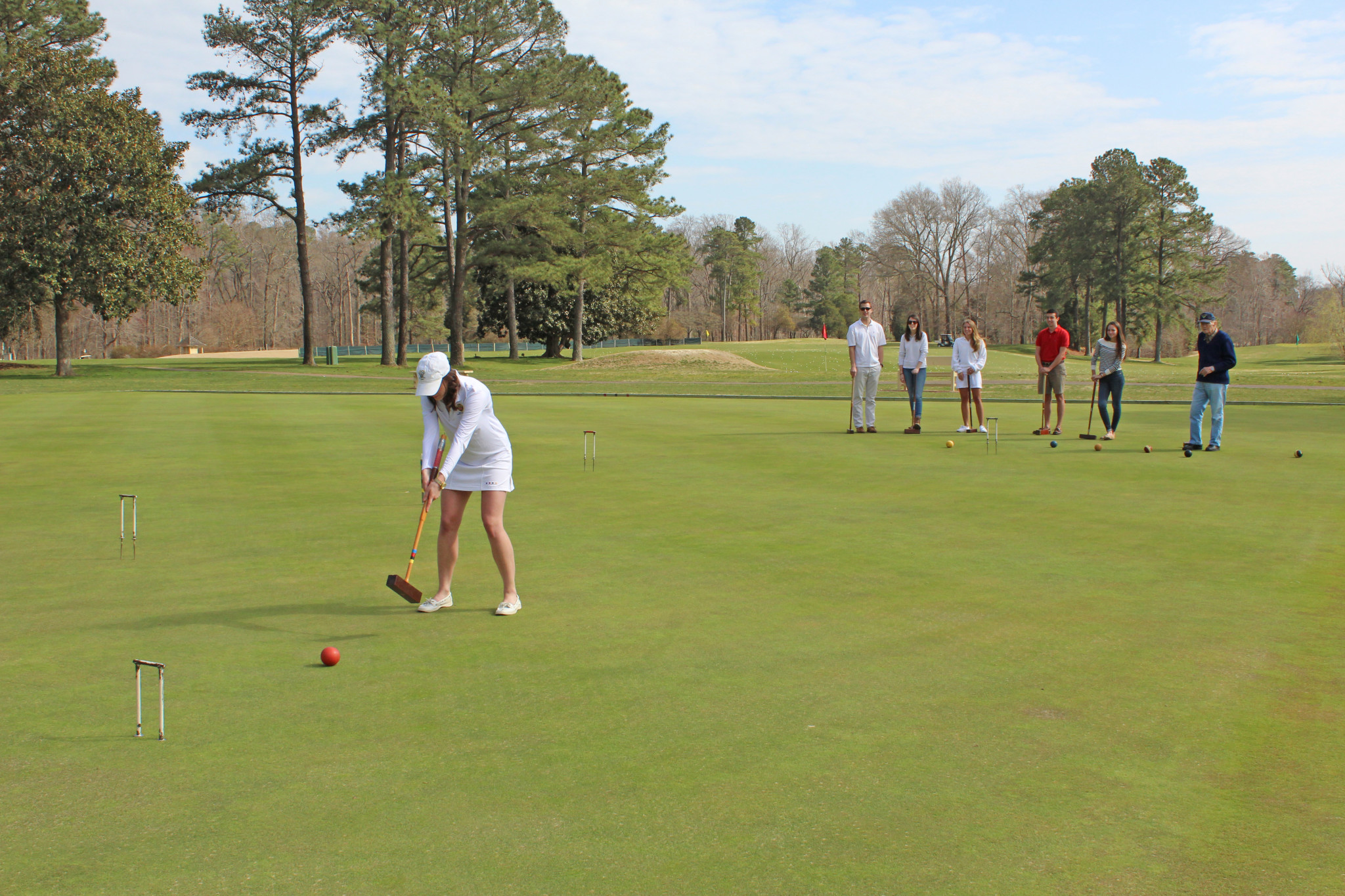 For members of the College of William and Mary’s croquet club, croquet is not just a casual lawn game for summer evenings. It’s a serious sport.

The croquet club has been around longer than most students might suspect.

“The William and Mary team has been around for fifteen years,” club captain Anastasia Peregrin ’16 said. “I don’t know if there was one before coach, but that’s how long he has been with us.”

“Coach” is United States Croquet Association member George Barnes, a retiree who lives in Williamsburg. He founded the present croquet club and comes to their practices and end-of-year tournament.

“We practice two times a week,” Peregrin said. “It used to be three, but Coach is ninety-six now, and three got to be too much.”

The team practices in the afternoons on a patch of grass near the golf courses behind the Williamsburg Inn. Their area is specifically designed for lawn game use.

“Sometimes we share it with the lawn bowlers,” Caroline Creasey ’16, a member of the team since her freshman year, said. “They’re always really friendly.”

The lawn bowlers come from the Williamsburg Lawn Bowling Team. So far, the College’s croquet team is the only croquet team with permission to use the lawn at the Williamsburg Inn — largely thanks to coach Barnes. He has also been instrumental in helping the team join the United States Croquet Association.

“We practice two times a week. It used to be three, but Coach is ninety-six now, and three got to be too much.” — Anastasia Peregrin ’16

According to Peregrin, every member of the team automatically becomes a member of the USCA when they join the team. This membership allows them to participate in the USCA-hosted tournament at the end of the year.

“We always have a tournament at the end of the year — a collegiate tournament in Pennsylvania at Merion Cricket Club,” team member Jen Koontz ’16 said.

The members of the College’s croquet team were the champions of the tournament in 2012, winning both the individual and team divisions. In 2005, they came in second place.

Croquet has been steadily growing as a college sport, and more teams have been competing in the tournament every year. Peregrin and Koontz listed a variety of colleges that they saw at the competition last year, including Ivy Leagues, large state schools and smaller private schools.

In recent years, the croquet club has not managed to advance as far in the competition as they did in 2012.

“[Last year’s tournament] wasn’t good enough to take note of and remember,” Creasey said. “We won some; we lost some.”

As for other croquet opportunities, team members usually find them on their own.

“The school doesn’t fund any tournaments, so if you want to go, you usually go on your own,” Peregrin said.

She and Koontz went to Palm Beach, Florida earlier this year to compete individually.

“As far as team tournaments that we all go to, it’s just once a year at the collegiate tournament,” Peregrin said.

In the tournament, one or more people from each team competes.

Peregrin said the size of the team fluctuates, and some prefer to play for fun rather than compete.

She said the members who do want to compete are usually devoted to coming to every practice, since it is often the only opportunity they will have to practice using a real set.

“The team itself owns two mallet sets, and coach owns everything else,” Peregrin said. “The croquet sets can be thousands of dollars.”

The type of croquet the team trains for is often referred to as “golf-croquet.” It uses six wickets instead of the nine used in the lawn game version. “Golf-croquet” is the version of croquet that the USCA uses in the end-of-the-year tournament.

While serious about preparing for their tournament, Peregrin said the team welcomes anyone at any level of expertise to join the team.

The croquet club will participate in the tournament April 25 and 26.