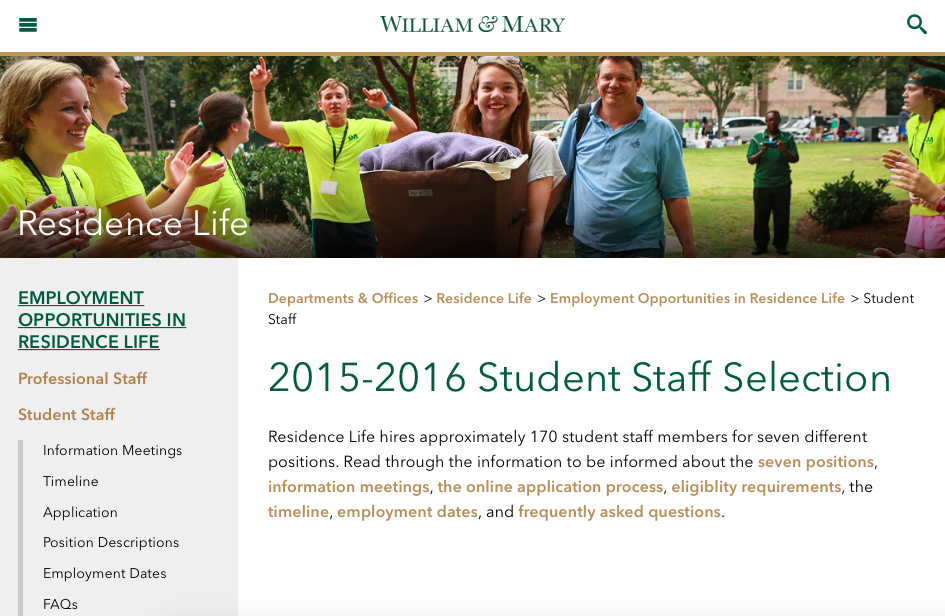 For the 2015-16 academic year, 288 students applied for a position on Residence Life’s student staff, and 166 have been hired so far.

Associate Director for Community Development Holly Alexander Ph.D. ’12 said that she believes the process is very competitive. Only 164 students were accepted to join the 2014-15 staff out of 312 applicants during the last hiring cycle. During the process, Alexander said that preference is not given to returning applicants. Once ResLife determines which students meet the GPA, honor and conduct requirements for an interview, they begin evaluating what their needs will be for the year.

“We spend a couple of days looking at the needs across campus, and we start building the staff, and we don’t do that based on new or returner,” Alexander said. “We certainly want to look at that comprehensively — I mean there [are] a lot of things that we want to look at in terms of building a staff: ‘Is it diverse?’ Does it represent the student body in some way?’ ‘Are there any special needs in that community?’”

Meaghan Smith ’16 reapplied for an RA position after two years of working on the staff. She said she enjoyed the interview process but that it could be hard to accurately convey her personality to an area director in one conversation.

“I like the fact that they make you interview with somebody that you actually haven’t met before because it gives you the chance to meet other area directors and for other area directors to meet you, so that increases your chances of where you might end up on campus,” Smith said.

The 170 available positions are not just for resident assistants, but include all student staff position: head residents, hall directors, complex directors, graduate RAs, program advocates and head staff RAs. There are five additional positions on hold that will be filled midsummer because the sex designations in some freshmen dorms have yet to be decided.

Tom Myers ’16 has been an RA for the past two years and underwent the process again this spring.

“How it actually goes down isn’t really explained to us, it’s kind of like closed doors, but the interview process is always very good,” he said. “It gives you a good chance to get who you are across better than any kind of cover letter or resume would and a lot of times, I think being an RA is very personality-based, so it’s that much more important to have that face-to-face contact.”

Myers applied specifically for a head resident position, but was instead offered the opportunity to be an RA again. Despite the increased stipend this year, up to $3,000, Myers declined the offer.

“Part of the reason is just because some of the staff — some of the area directors — just aren’t as supportive of everybody,” Myers said. “It’s just not always the best environment. I also just didn’t think it was worth it.”

Some of those who aren’t hired immediately are put on an “alternate list,” according to Alexander. This list consists of students who ResLife thinks qualify for a position, but does not have space for. Smith has been on the alternate list all three years she applied.

Alexander said that she hopes students who are unhappy with their placement or their experience will talk to the ResLife staff to better understand the decisions made and the process as a whole.