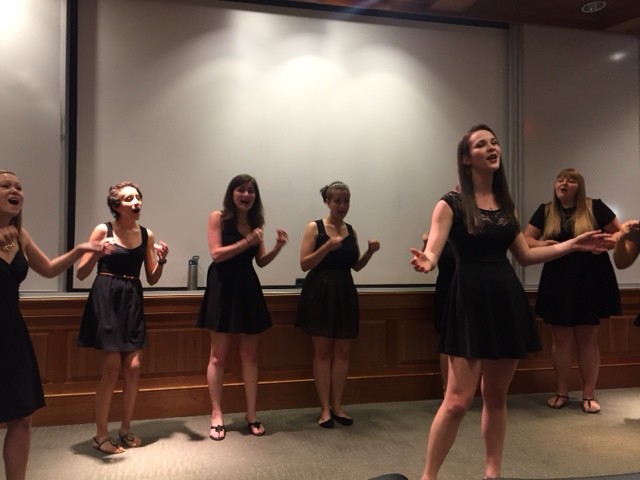 College a cappella — it’s a community made famous by “Pitch Perfect,” often portrayed as groups of quirky, model-like individuals who are liable to burst into song at any moment.

This semester, a newly founded group at the College of William and Mary — the Tribetones — is attempting to break into the world of college a cappella.

Founded by President Ali Gellman ’17 and Vocal Director Katy Knortz ’16, the group consists of nine women who sing everything from contemporary hits to jazz and classic rock like Billy Joel.

Gellman and Knortz said they started the Tribetones because they saw significant unmet demand for a cappella on campus.

“Especially as transfers, we found it very hard to get a spot in [a cappella groups] because they like to take mostly freshmen, so we wanted to make a new group open to any age and based solely on talent,” Gellman said.

Knortz also said that joining the College community as a transfer impacted her decision to start the Tribetones.

“Especially as transfers, we found it very hard to get a spot in [a cappella groups] because they like to take mostly freshmen, so we wanted to make a new group open to any age and based solely on talent.”

“It really hits home that we were both transfers, and other transfers I have talked with had the sense of not knowing anyone coming in,” she said. “We weren’t the fresh freshmen that everyone loves because they’re new to the community … We felt strongly just coming in as transfers and not having connections; it was hard to integrate into ‘One Tribe, One Family.’”

The inaugural members of the Tribetones were chosen from a pool of 30 individuals. Although the current Tribetones are all female, Knortz said that the group is gender fluid and will admit those who show the most talent regardless of gender.

The Tribetones performed at Day for Admitted Students and will perform in a joint concert with the Bates College Deansmen April 22.

Additionally, their first online video, a performance of Billy Joel’s “For the Longest Time,” received over 3,000 views.

“From the general community, there’s a lot of support because William and Mary loves new groups,” Gellman said. “When we did our interview to become a real group, the staff was really excited for us to make this addition to campus.”

Next year, the Tribetones hope to expand their membership to 15 individuals. They also have a fall concert planned and are going on tour over fall break in 2015.

“We’ll continue doing that each semester, just getting as many shows as we can to get the word out,” Knortz said.

An additional goal for the Tribetones is gaining membership in the College’s A Cappella Council, which currently governs 11 a cappella groups on campus.

“In the past, what the council had seen was that once the founding members had graduated, there was no momentum to kind of sustain the group.”

Membership in the council allows groups to be part of a coordinated audition process, showcases and Wren Ten performances.

According to council President Dan Kent ’15, the council’s constitution states that in order to be recognized as a council-affiliated group, a group must have sustained itself for four years — long enough for founding members to have graduated.

This stipulation — as well as a rule that new groups must have an absolute minimum of 10 members or as many as the smallest group in the council — is part of a newly codified constitution approved last semester.

“This is kind of just a sustainability thing,” Kent said. “In the past, what the council had seen was that once the founding members had graduated, there was no momentum to kind of sustain the group.”

When Gellman and Knortz applied for membership in the council earlier this semester, Kent said he sent them the above information from the constitution to clarify that the Tribetones were not currently eligible for membership.

In a later meeting between Gellman and Kent, however, the two discussed the possibility of gradually integrating the Tribetones into the council.

“What we talked about was the fact that the council hasn’t faced a group seeking membership into the council in 15 years, since Passing Notes was formed,” Kent said. “None of the current students are used to dealing with [this], so we wanted to talk about the different options available.”

April 26, the council will convene to discuss the Tribetones’ potential transition into the council.

“We’re giving council members and group members in general a chance to propose any changes and then discussing them and voting upon them,” council Vice President Maguire Brinkley ’15 said.

According to Kent, a potential idea is integrating the Tribetones into various council activities over several semesters — including them in auditions one semester, allowing them to perform in a showcase the next semester and giving them a Wren Ten the following semester, for example.

The council, which consists of Kent, Brinkley and the top two leaders from each of the 11 member groups, must reach a two-thirds majority vote to pass any new propositions.

Regardless of the council’s decision, Gellman believes that the Tribetones will continue to grow.

“We definitely will be here for a while because there’s such a demand, and the demand will definitely continue to grow for the Tribetones.”