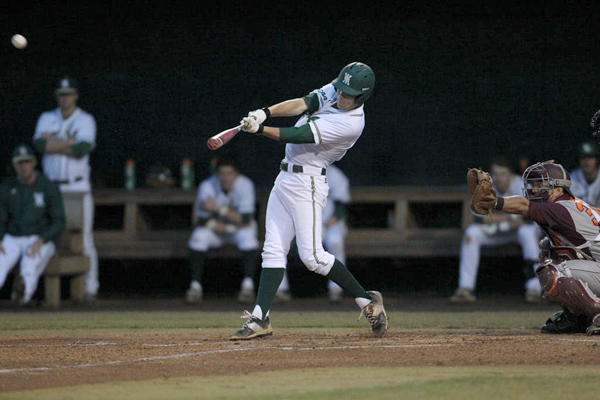 William and Mary continued the hot streak from its sweep of James Madison last weekend as the College conquered the Keydets of Virginia Military Institute by a 8-2 margin Tuesday night in Lexington, Va.

The evening began slowly as the first three College batters made outs to end the first half-inning. VMI (12-22, 5-7 Southern) put a man on base through a Tribe error, but was picked off while attempting to steal by Hoehn.

The second inning began the College’s onslaught of runs. Hoehn walked up to the plate and slammed the ball out of the park for a 1-0 lead, and his second homer of the season. Junior centerfielder Josh Smith singled, followed by a single by freshman right fielder Ryan Hall, but the next two batters failed to make it to first, stranding Smith and Hall on base.

The Keydets offense was suppressed in the bottom of the second due to the performance of the Tribe field. After junior right-handed starting pitcher Mitchell Aker hit consecutive batters with pitches with two outs to go, VMI’s Colin Fleischer hit towards Hoehn, who initiated a successful double play to end the inning with no damage done to the College’s lead.

The Tribe extended its lead to three in the third as it continued to dominate at the plate. Large hustled to first on a single and stole second. Gould stepped up to bat and singled as well, advancing Large to third. Hoehn brought in his second RBI of the night as he took his base from a fielder’s choice to bring in Large. The bases loaded as senior left fielder Devin White singled, setting up Smith for a scoring play as he was on deck with one out on the inning. Smith hit a sacrifice fly to right field, plating Gould to bring the score to 3-0. Hall flew out to right as well, ending the inning with two left on base.

Aker quickly took care of the bottom half of the third inning, striking out one and scooping up a ground ball for an out. The last out was another groundout, this time to Large at second, ending the inning three up, three down as the Tribe dramatically improved from previous games plagued with fielding errors.

The fourth inning began with a change on the mound for VMI as the Tribe was back on offense. Sophomore designated hitter Ryder Miconi hit into a double play, but it didn’t steal any momentum from the College, as Large crushed the second Tribe homer of the game in the next at bat, bringing the score to 4-0.

The next inning and a half were unproductive, as neither team scored in the fifth inning.

The College once again added a run to the board in the sixth. Smith walked and was able to advance on a sacrifice bunt by Hall. Senior third baseman Willie Shaw earned an RBI as he singled and brought in Smith with the help of an error by the Keydets in the outfield. The Tribe now had a commanding 5-0 lead.

Aker continued to pitch at the mound into the bottom of the sixth where he didn’t give up runs, but did surrender a single to the first batter faced in the inning. VMI remained scoreless after six innings.

After a flyout by junior catcher Ryan Hissey, Gould hit his 11th home run of the season, the third Tribe out-of-the-park blast of the game.

The seventh inning was eventful for both teams, as the Tribe and the Keydets each scored a pair of runs in their respective half innings. After a flyout by junior catcher Ryan Hissey, Gould hit his 11th home run of the season, the third Tribe out-of-the-park blast of the game. VMI changed pitchers again after Hoehn doubled. Hoehn eventually scored after an error at first base, putting the scoring total at 7-0 at the midpoint of the seventh.

However, Keydets were not going down without a fight. Refusing the shutout, VMI’s Matt Winn homered out of center field for the team’s first run of the night. After a single, a strikeout, a line out, and a walk over the next four at-bats, the Tribe called the bullpen, substituting in freshman right-handed reliever Robert White for Aker. With Robert White on the mound, another run came across home plate as he gave up a single. Robert White then struck out a batter to escape the inning and stall the Keydet rally with two men left on base. The score now sat at 7-2, the Tribe holding a substantial cushion heading into the penultimate inning of standard play.

The eighth began with a Miconi strikeout, but Large made it to first and subsequently to second on an error by the VMI first baseman. Hissey struck out and VMI changed pitchers again, but Gould wasn’t done with his performance and slammed out an RBI double for the final run of the game as the College now led 8-2.

The Keydets had no hits, runs, or men on base in the bottom of the inning, all but sealing their defeat.

In the ninth, the Tribe began utilizing pinch runners and substitutions and made one hit but no further runs. As VMI got to the plate for the bottom of the ninth, the Tribe put in sophomore right-handed pitcher Daniel Powers to close. Powers gave up two hits but no runs, and the Tribe ran away with the 8-2 triumph to end its midweek schedule for 2015.

With the win, the College improves to a .500 record once again. Aker was given the win, his first of the season. He pitched six and two-thirds innings and gave up two runs, four hits, and added six strikeouts, he pitched four innings of a no-hitter and six innings of a shutout. VMI’s Matthew Eagle took the loss, putting him at a 0-5 record. He pitched three innings, gave up three runs, six hits, and had three strikeouts.

The Tribe finishes its midweek schedule with a 3-8 record, having dropped most of its single or dual-game series. The College now looks to complete its current four-game road trip this weekend with a three-game series at Colonial Athletic Association opponent Delaware starting Friday at 3 p.m.