Thursday, the Board of Visitors’ Committee on Audit and Compliance met with state auditors at the College of William and Mary.

Judge John Charles Thomas opened the meeting with by welcoming everyone in attendance.

State Auditor of Public Accounts Brad Hypes reported his findings from the state’s audit of the College to the board. Hypes mentioned some minor issues with employees’ travel voucher forms not being filled out and said that some employee termination forms, in which an employee of the College surrenders all property and is removed from systems access, were also missing.

Hypes addressed an issue that arose last year because of the Patient Protection and Affordable Care Act.

“A wage employee who works an average of 29 hours a week should receive a certain amount [of care],” Hypes said.

Hypes briefly talked about Richard Bland College’s audit, and then the meeting entered a closed session.

Once the session reopened, the state auditors left and Director of Internal Audit Kent Erdahl ’83 shared his findings on the College’s internal audit.

First, Erdahl presented a list of the areas of the school that were being audited this year.

Leigh Pence, vice chair of the committee, asked if a data security audit for the Counseling Center fell under the general Computer System. Vice President of Student Affairs Ginger Ambler ’88 Ph.D. ’06 said that the Counseling Center has a different data system from the rest of the College so it most likely did not.

Kiersten L. Boyce, chief compliance officer and Title IX coordinator, then reported on the General Assembly meeting and their discussion of sexual violence issues. Boyce said one upcoming change was the new obligation for Chief of Police to report to local law officials.

Chief of William and Mary Police Deborah Cheesebro clarified that this requirement would just mean more responsibility by the police department to report sexual assault to the Commonwealth Attorney, not the Williamsburg Police Department. 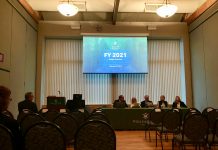