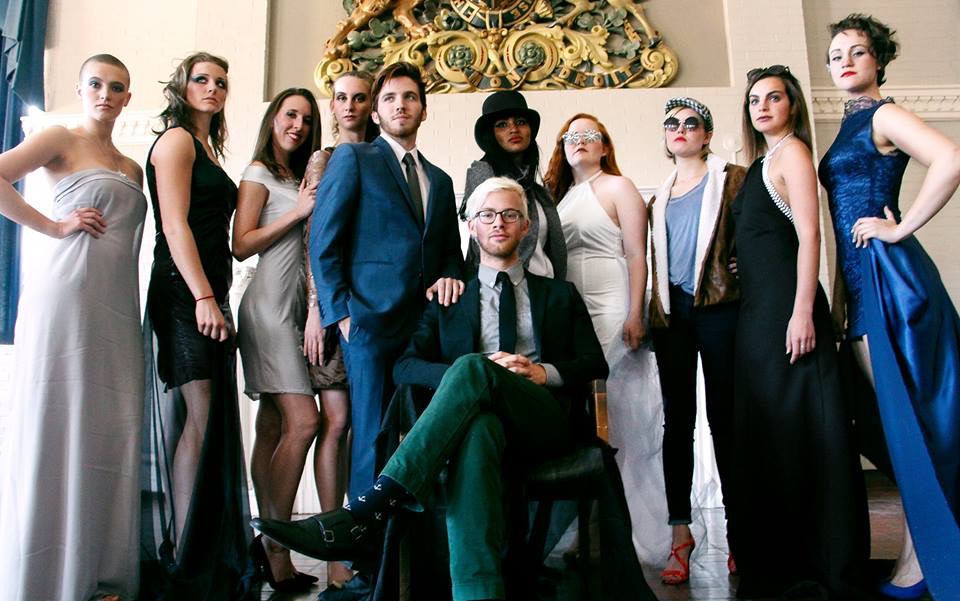 It all started with Blanche DuBois.

Grayson Cooke ’15 was first introduced to the art of fashion design by a freshman theatre assignment — create two dresses for DuBois, the main character of “A Streetcar Named Desire.” Now, as a senior, Cooke’s first clothing line, Alter Altar, made its debut this past Friday.

“I came up with these two dresses for [DuBois] to wear and the symbolism behind that, and I found I really liked [it],” Cooke said. “Then with studies and everything, I kind of left that behind and got distracted.”

Once Cooke became an art major, he rediscovered his interest in design and decided to create two dresses for the senior art showcase at the end of the year.

“I met Corey because he was working as the assistant costume designer [for Sinfonicron], and I remember I went down to the costume shop and I showed him one of the designs,” Cooke said. “I [asked] how would I go about making this, and he said, ‘This is easy. I could do this real[ly] quick right on the spot.’ The fact that he did it so quickly really inspired me [to believe] we could do a lot more than two [dresses].”

Cooke asked his art professor if he could produce a separate show just for his designs, in addition to participating in the senior showcase. The professor gave his approval, so Cooke and Strickland began planning.

A major aspect of creating the show was working together to design and create multiple outfits.

“Like a block of wood, [Corey] provides it and we both whittle it down together to get to the final dress that we both think works well,” Cooke said.

Strickland said that while he looks at the pair’s work from a technical aspect, Cooke views it in terms of form.

“[I was] thinking about clothing and how it can mean more than just something you throw on. Rather than having this be a portfolio builder or an ego booster for us two, we could make this so much more.” —Grayson Cooke ’15

In addition to creating the outfits, Cooke and Strickland added a charity element to the show.

“[I was] thinking about clothing and how it can mean more than just something you throw on,” Cooke said. “Rather than having this be a portfolio builder or an ego booster for us two, we could make this so much more. … There’s this stigma attached to high quality fashion because it all goes to the designer. There’s nothing really good coming out of it other than [saying], ‘Look how pretty I am,’ so I decided to sort of twist that and make the dresses that we create help people, which is how the charity aspect came in.”

Strickland, who lives near Richmond, has been helped by ROSMY in the past.

“They provide a network for kids, whatever they need, whether it’s counseling, support, peers [or] a place to talk,” he said. “In my case, [they helped] me found a GSA [Gay-Straight Alliance] in my school. They are for kids who have no one else to turn to. … I am proof that they can take a kid in a rural part of Louisiana and make me believe again that things are possible.”

All ticket sales from the show April 24, as well as the profits from selling the dresses if Cooke decides to put them up for auction, will go toward ROSMY.

One of the last aspects of planning the show was choosing and training models. Cooke asked 11 women, many of whom are involved in theatre, dance or a cappella on campus, to be models.

Austin Spivey ’15 and Megan Tatum ’15, two of the models, said preparing for the show involved runway workshops and multiple fittings.

Spivey said she was especially impressed by the tailoring skills Strickland has shown.

“[It’s been] cool to see how [Corey] pulls things together from the ground up and see his creative process,” Spivey said. “[I] sort of act as a canvas for his vision and his ideas.”

When choosing models, Cooke and Strickland said they emphasized that they come as they are.

“[We] don’t expect you to lose 50 pounds [or] gain 50 pounds,” Cooke said. “We chose you because of the way you are and wouldn’t want you any other way. In a way, I designed these gowns to help the girls we picked feel empowered, not that they don’t already. I very much like the idea of fashion, style and clothing being a sort of confidence booster.”

By the day of the show, Cooke and Strickland had created 12 looks — the majority of which were dresses and jackets.

After models walked the runway for about 15 minutes, Cooke spoke about his inspiration for the event. Following these words, the models were available to take photos with the audience.

“[We] don’t expect you to lose 50 pounds [or] gain 50 pounds. We chose you because of the way you are and wouldn’t want you any other way. In a way, I designed these gowns to help the girls we picked feel empowered.” —Grayson Cooke ’15

Event attendee Garrett Tidey ’15 said he thought the show highlighted the fact that even though there is not a fashion design program at the College of William and Mary, there are talented fashion designers here.

“[It’s] really amazing that this is starting [to be] an open door for things like this, for other fashion shows but also [for] people [to say], ‘I have this hobby that I don’t share but could be shared,” Tidey said.

Strickland and Cooke had similar reasons for why they decided to hold the show.

“I want people to hopefully see my viewpoint … how I see everyone can be a model,” Strickland said. “If there’s one thing I can do, I can make the world a better place, and my way of doing it is by making people see how incredible they are. Sometimes it’s as simple as putting a gown on someone and saying, ‘Don’t you look fantastic? Don’t you feel like you can take on the world?’ … I want my clothes to inspire good feelings. I want what I have built to feel as comfortable as I want people to feel with themselves.”

Cooke said that his original goal for the show was to leave his mark on the College, but he later decided that charity would be a more worthwhile focus.

“I realized that that wouldn’t last, that me just going, ‘Look at what I can do’ wasn’t special, wasn’t really worth it, wasn’t worth people’s time,” he said. “[I came to the] realization [that] none of this really mattered unless it helped someone, and that hit me, and by making it into a charity event I realize now I can sort of have a positive impact. That, in its way, can sort of be a mark on the campus.”