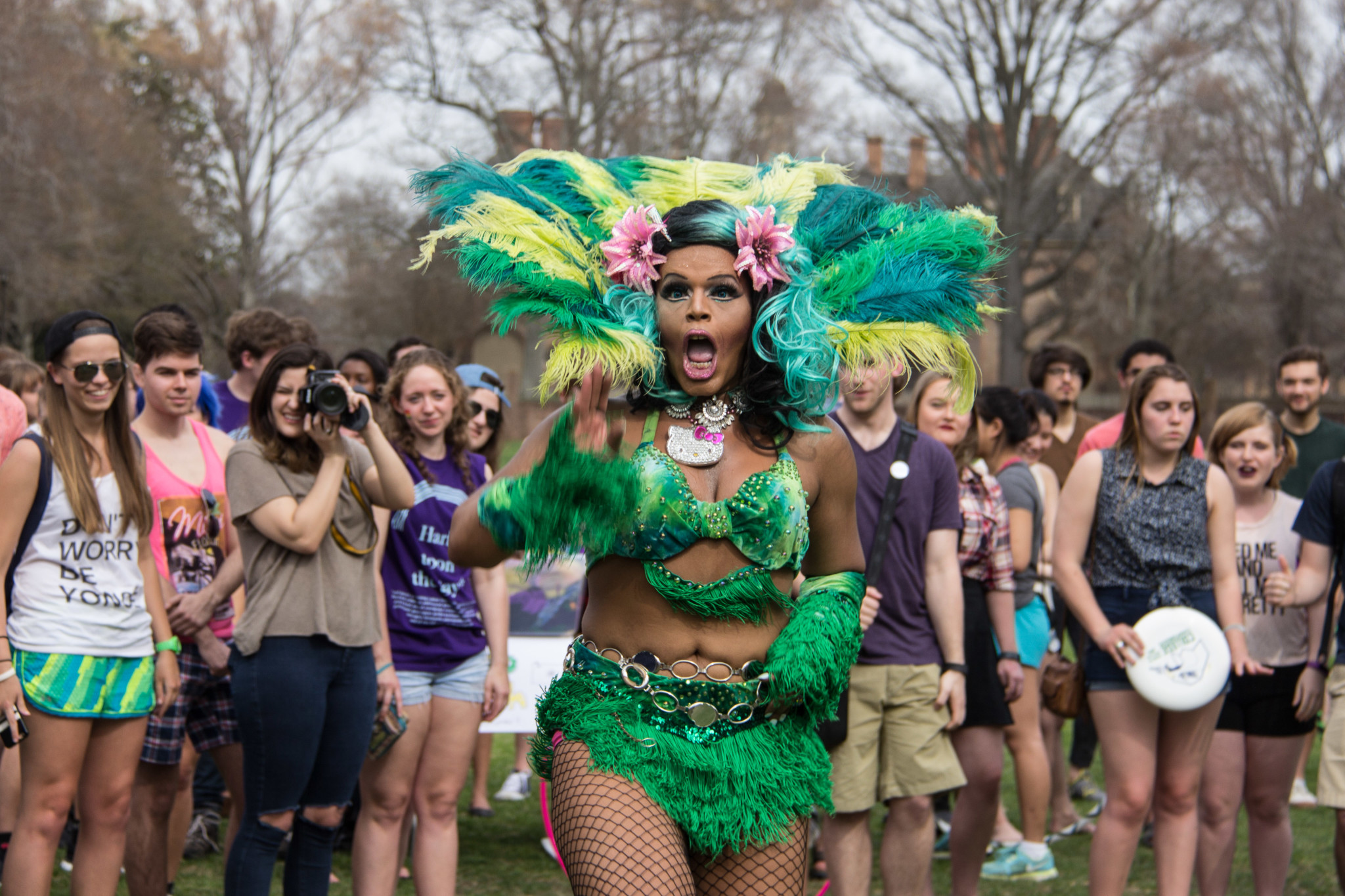 Tour groups and visiting families were faced with rainbow flags, an inflatable bouncy castle, Bhangra dancers and a few drag queens as they passed by the Sunken Garden Friday, April 3, one of the first spring days featuring temperatures above 60 degrees.

The College of William and Mary’s Lambda Alliance hosted both a three-hour-long Pride Festival and a Drag Ball this past Friday. Events like these are organized in order to celebrate LGBTQIA culture and pride. The profits from parts of Lambda’s event went to the Ali Forney Center, which provides services to gay youth in New York City.

Before the scheduled lineup of events began, attendees of the free event had time to visit the multiple booths featuring on-campus organizations — from the Young Democrats to Active Minds — as well as booths operated by Lambda. Alongside the bouncy castle, Lambda had tables set up for fortune telling, face painting, drag-queen-applied makeovers, photographs and kissing booths.

“The money raised [by the kissing booth] goes to supporting queer youth who may have been kicked out of their house because of their sexuality,” Hayes Parker-Kepchar ’18, a Lambda member who manned the kissing booth, said.

One of the many drag performers, Naomi Black, acted as emcee for the event. The event began with a spoken word performance, and throughout the day, members of the College’s new spoken word club, Voice, put on several more of these performances. Drag queens traveled to campus to perform lip-syncing routines at the event, as well.

The drag entertainment began with two songs performed by Black, who informed the audience of the preparation she put into the event before her performance.

“I did my makeup for three hours today,” Black said. “I woke up at six o’clock in the goddamn morning to do this shit. You can call it dedication, I just call it I don’t want to scare anybody.”

“I don’t want anyone to be up in arms because I told a whole campus full of lovely children to cuss out loud, because I’m going to do that,” Black said.

The attitude checks continued throughout the evening. Black’s performance was followed by a performance by William and Mary Dhamaal Bhangra. The day continued with performances by the a cappella group the Intonations and the second drag performer, Amore Diamond.

Later, College President Taylor Reveley spoke to the audience regarding pride and LGBTQ culture at the College. Reveley began his speech with a comment on admissions to the College at the time of its founding.

“In 1693 if you wanted to be a student at William and Mary, first of all you had to be male,” Reveley said. “No girls. Second, you had to be white. No people of color. Third you had to be heterosexual — or at least you had to say you were. Fourth you needed to be Anglican, because people of other religious faiths were not welcome. And finally, your daddy needed to have some money. There has been an enormous change since then.”

Reveley spoke on the diversity of the previous four Rectors at the College.

“Of the last four rectors of our board, one has been African American, another has been a woman and another has been our first openly gay rector,” Reveley said, prompting applause from the audience. “We’re back to the standard issue white male heterosexual at the moment, but the logjam has been broken.”

Reveley wrapped up his speech with a message to the audience.

“Hang in there everybody,” Reveley said. “William and Mary cares about you.”

“Hang in there everybody,” he said. “William and Mary cares about you.”

After Reveley spoke, the day continued with more spoken word poems, a performance by the student band Tsuki Bomb and the a capella group the Stairwells, and more lip-syncing performances by drag queens Alessandra Peru and Cameron Foxx to wrap up the show.

Pride ended at 6 p.m., but Lambda’s Drag Ball began at 8 p.m. in the Little Theater. Tickets were five dollars, and the event lasted until 10:30 p.m.

Naomi Black emceed the Drag Ball as well, warming up the audience and performing three of her own lip-syncing routines. Each of the four drag queens performed twice, and several students — both males and females — participated in a short drag competition.

“I love coming out here and entertaining all of you,” Black said at the end of the event. The three other drag queens, Peru, Diamond and Foxx, joined Black onstage to receive applause from the audience before leaving for another show.

The last attitude check of the day followed Black’s goodbye after the other performers left the stage.

“This whole day was to bring people together, and if anything it just did that,” Black said. “And y’all should be very proud of that.”