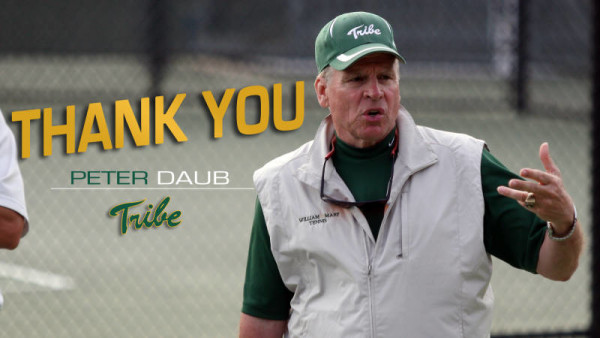 Men’s tennis will remember 2015 as the final year of guidance under head coach Peter Daub, a fixture at William and Mary for the past 22 years, as he announced his retirement on June 29. After claiming a fourth Colonial Athletic Association title for the Tribe this past year, Daub leaves behind a proud legacy at the College, racking up 325 victories on the court and four NCAA tournament appearances for the Tribe. In addition, nine players earned berths in the individual NCAA championship tournaments under his tenure. Daub’s accomplishments did not go unnoticed by the conference, as he received CAA Coach of the Year honors three times.

Daub’s departure draws attention to his remarkably successful career with the Tribe, and rightfully so as he becomes just the seventh coach to reach 300 wins in any sport with the College. Yet, after the surprise CAA tournament run as the No. 3 seed in the conference, the Tribe’s Cinderella-story bid ended with a one-and-done at the big dance that is the NCAA tournament on May 8 at Cone-Kenfield Tennis Center at Chapel Hill.

{Daub} becomes just the seventh coach to reach 300 wins in any sport with the College.

No. 13 seeded North Carolina (21-10) ran the Tribe (16-13, 1-0) out of town on a rail, shutting down the College in a 4-0 sweep. With the opening doubles loss at the top spot, the Tribe knew it was in trouble. All-CAA senior pairing Aaron Chafee and Will Juggins, stalwarts of the College’s season, fell short in an 8-5 shootout to the UNC duo of Esben Hess-Olesen and Brayden Schnur. UNC clamped down the doubles point with a 8-4 victory by the No. 45 ranked team in the nation of Brett Clark and Robert Kelly, putting away the Tribe pairing of sophomore Addison Appleby and freshman Lars de Boer.

The All-Atlantic Coast Conference portion of UNC’s roster (a sizeable section with four Tarheel players having such distinction) steamrolled the Tribe for the majority of singles play. All-ACC selection Jack Murray cut down sophomore Damon Niquet 6-0, 6-2, while fellow All-ACC selection and No. 73 nationally-ranked player Brett Clark eliminated Appleby at 6-3 and 6-1. This left the Tribe buried in a 3-0 abyss with no breathing room to save their season.

However,  the 2015 edition of glass tennis shoes were only available in Williamsburg during the CAA tournament  and no further miracle was forthcoming, as the Tribe was not to claim a single set. Senior Will Juggins fought against No. 28 ranked Ronnie Schneider, but still fell 6-4 in the opening set. Freshman Alec Miller at the No. 6 spot blew a 3-0 lead to lose his first set 6-4. However, neither of those games would finish before freshman and CAA rookie of the year Christian Cargill was defeated in the decisive match. Playing at the No. 1 spot against the formidable No. 11 ranked Brayden Schnur, Cargill dropped the opening match 6-1, but staved off UNC’s ace player in the second set, tying at five apiece. However, Cargill couldn’t pull off the upset, ultimately losing 7-5. UNC eventually advanced to the quarterfinals before losing 4-1 to Texas Christian University.

While the 2015 season overall should certainly be counted as a success, the dismal performance in the NCAA tournament frustrated Tribe fans eager to see the program compete at a national level. Bright spots such as Juggins earning CAA Scholar Athlete of the Year and Cargill’s CAA Rookie of the Year honors are a testament to a strong final season under Daub. Yet William and Mary is ready for more than appearing in the NCAAs, and certainly the Tribe will do its best to hire the next great coach to take the young and talented 2016 squad past that first round.