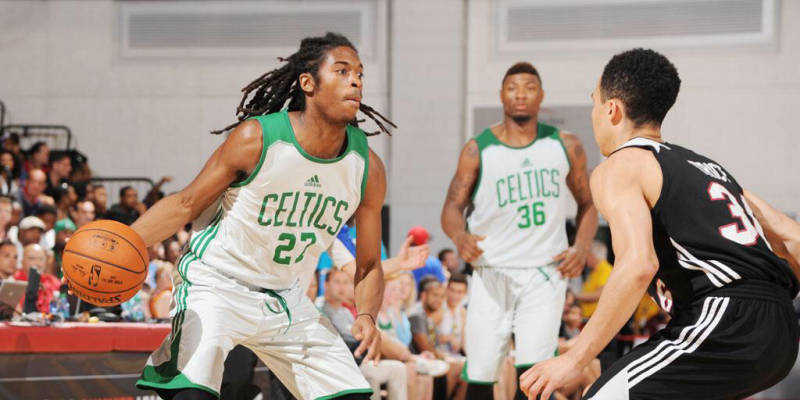 About the only thing that hasn’t changed for Marcus Thornton ‘15 is the color of his jersey.

The Boston Celtics drafted him in the 15th selection of the second round of the NBA draft last month and the decidedly green franchise has Thornton back in almost-familiar colors.

William and Mary’s all-time leading scorer wrapped up his stint in the National Basketball Association’s Summer League this Saturday. Thornton was the 45th player taken overall.

Despite limited time on the court, Thornton did manage to reveal flashes of the talent and athleticism that defined his career as arguably the greatest player in Tribe basketball history. Though the William and Mary gold was absent from his uniform and No. 3 was replaced by No. 27, Thornton didn’t appear far-removed from his days of stellar performances with the Tribe.

In a post-draft interview, Celtics reporters Amanda Pflugard and Mark D’Amico asked Thornton what he thought had captured the attention of NBA scouts at the draft, and how he could contribute to a team at the professional level. Thornton pointed to the same  skills that had allowed him to thrive at the College.

“Explosive scoring, athleticism and the combination of the two,” Thornton said. “Being the focal point of defenses and still being able to make plays and be successful. And winning games, too, which is always important. It’s important to be a leader and win games.”

Thornton demonstrated those talents and more in the Celtics July 14 win against the Heat. After averaging just eight minutes and 1.6 points in his first five games, Thornton exploded for 21 points on 5-8 shooting, including makes on his first four shots. Thorton was also able to bury both of his three point attempts—no surprise to Tribe fans.

Thornton utilized his smooth athleticism and excellent ball handling to get to the rim and draw contact, a play he repeated over and over again against the Heat. He had a game high nine free throw attempts, hitting all of them.

“He hasn’t really had [a breakout game] yet, and I wanted to give him a chance early,” Shrewsberry said in an interview with Marc D’Amico of Celtics.com. “He can play with the ball and he can play without it. He’s really explosive with the ball.”

If Thornton is to make it in the NBA, it’s likely to be as a “microwave scorer” off the bench—a player capable of creating his own shots and manufacturing instant offense.

Thornton displayed this ability in Saturday’s game against the Spurs. Late in the second quarter, Thornton cashed in eight points in under two minutes to help extend the Celtics’ slim lead.

Due to the relative inexperience of players in the Summer League (the teams are a combination of rookies, second-year players and veterans hoping to make an NBA squad) and the limited offensive sets teams have at their disposal, the games often feature a heavy amount of one-on-one play, a style that suits Thornton. After missing his first two shots, Marcus flew into the lane for an easy layup in one possession and hit a tough floater the next, drawing a foul in the process. A few minutes later, he pulled up for a long two and buried the shot.Though all of his points would be limited to this brief stretch, the outburst may help convince the Celtics that Thornton is a viable option off the bench.

Though all of his points would be limited to this brief stretch, the outburst may help convince the Celtics that Thornton is a viable option off the bench.

“It’s your job as a player to prove to the coach that you belong and you deserve it,” Thornton said to reporter Zach Cox in an interview with New England Sports network. “I’m just looking forward to getting to work, being a great teammate, learn from these guys and do the best I can.”
The Celtics’ roster is overloaded with young guards, and there simply doesn’t appear to be any room for Thornton. However, Ainge has been aggressive in pursuing a deal that would land Boston a superstar. If he were able to do so in the upcoming season, it would likely require him to shed at least one of Boston’s young guards for cap space reasons.

If this is the case, the Celtics might just have a vacancy that Thornton could fill—provided the Tribe’s former superstar can capitalize on this early momentum from the Summer League.