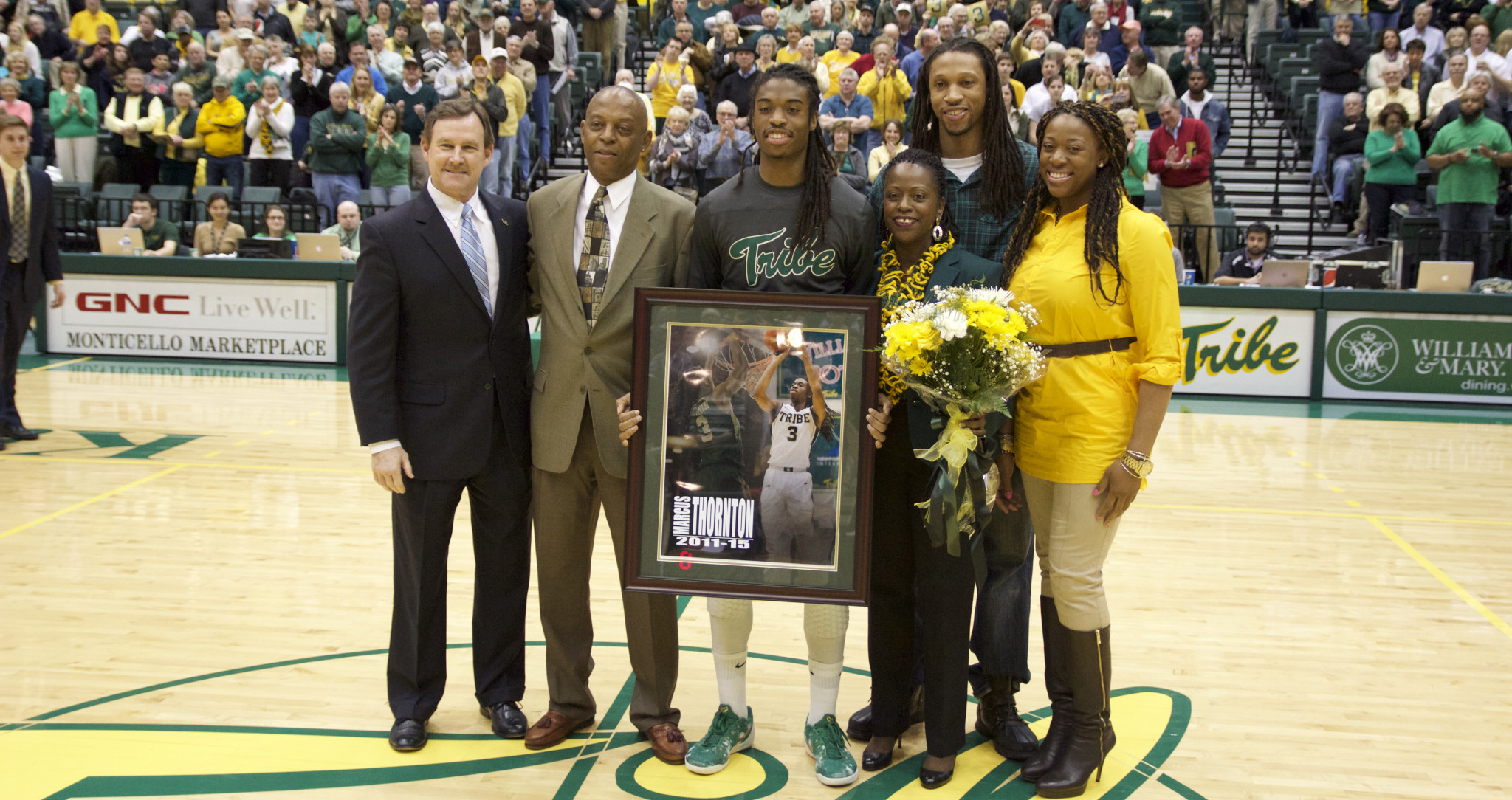 Marcus Thornton’s final game at Kaplan Arena didn’t have a dream ending. The senior guard — William and Mary’s newly-minted all-time leading scorer—received the typical adoration from the home crowd, made a few great plays and played only slightly below his typical level. Still, visiting Drexel bullied the Tribe, and Thornton could only watch the 80-66 loss unfold. Thornton’s team did not save the best for last; however, for Thornton’s legacy, it doesn’t matter.

It’s hard to describe what Thornton means to Tribe fans. When they scream his name after pregame intros or big shots, they seem to be pleading for him to notice their affection. Off the court, students tell stories about seeing Thornton at the gym or at Wawa, as if he has a celebrity’s mystique. He’s a normal college student who probably likes procrastinating and eating Wawa sandwiches just like we all do — but his on-court brilliance sets him apart.

That makes sense, however, because so much of Thornton is contradictory. His effortless in-game feats mask the grueling workouts that foster his skills. His composed professionalism hides a competitive spirit that every coach wants in a star player. He plays for the Tribe, a small-conference team that has never made the NCAA Tournament, yet he fits the bill of a key player on a national powerhouse team.

In basketball, you can spot the most athletic player on the court right away just by tracking everybody’s movements. And even though he was just a bench player at the time, I left that game figuring Thornton would be a star.

I was lucky to be here for all four years of Thornton’s career, and it’s interesting to reflect on what it has been like to watch a player of his caliber. I remember attending my first Tribe basketball game, seeing Thornton as a freshman and noticing immediately that he was the quickest player on the court. In basketball, you can spot the most athletic player on the court right away just by tracking everybody’s movements. And even though he was just a bench player at the time, I left that game figuring Thornton would be a star.

Still, basketball lore is riddled with the wrecked careers of gifted players who just couldn’t put it all together. As is the case with everything else, talent alone isn’t enough in basketball. But nobody ever worried that Thornton would become a cautionary tale. His work ethic is unquestioned, and he seems genuinely dedicated to promoting his teammates, rather than outshining them. He’s confident enough to believe he can score whenever he needs to, but smart enough to know when to pass up a shot to give a teammate a better opportunity.

I’ve interviewed Thornton several times, and I’ve never gotten the sense he cared about the spotlight or desired to be an iconic Tribe athlete. He’s so composed and professional when he speaks, always espousing a desire to play for his team and not for himself. His comments after breaking the scoring record on Wednesday summed it all up.

“I don’t think I approached it in a special way, my focus has been the same all year,” Thornton said.

That’s all you need to know about the Thornton era; after breaking the oldest scoring record in Division I basketball, Thornton reacted like it was normal. Maybe he sees that record as just a number despite how, more often than not, a player’s career is defined by his numbers.

Thornton breaking the scoring record felt like a validation of what we witnessed, verification that we were watching one of the greatest athletes in the College’s history, and that we were genuinely lucky to watch Tribe basketball when Thornton was on the court.

But as somebody who was there for all four years of the Marcus Thornton experience, I don’t think the scoring record is his legacy. Thornton breaking the scoring record felt like a validation of what we witnessed, verification that we were watching one of the greatest athletes in the College’s history, and that we were genuinely lucky to watch Tribe basketball when Thornton was on the court.

In the end, it all comes down to luck. Thornton blended skills, athleticism and attitude, molding himself into a terrific basketball player. He probably could have played for any Division I school in the country, but he ended up playing for a small school that seems to always be the bridesmaid, but never the bride.

Sometimes when I watched Thornton, I would marvel at how lucky it was that he ended up playing for the College and not somewhere else. It’s rare to see a player who resonates with fans the way Thornton does at any school. At William and Mary it feels miraculous.

So yes, the College was lucky to have Thornton, and the graduating seniors were lucky to have him on the team for all four of their years here.We can argue forever whether or not he’s the best basketball player the College has seen, and in my totally biased opinion, I’ll say he is. But that argument seems silly now. Thornton was really, truly great, and as his career at the College comes to an end, that’s what matters.