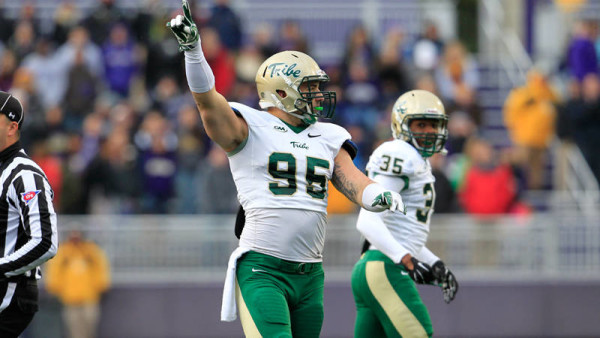 Nothing against the Colonial Athletic Association, but it is a fair statement to say that the quality of football played in the CAA does not quite match up to the ferocity of say, the Big Ten or the South East Conference – two NCAA Division I-A conferences – as opposed to the Division I-AA mid-major CAA. Of course, Tribe fans and players will still love to hate Richmond on the gridiron with the same intensity as back in 1898, but Williamsburg isn’t going to become Tuscaloosa.  And William and Mary’s 7-5 middling record within the CAA in 2014, as well as a student population of roughly 6,000, underlines the fact that the Tribe is likely competing at the highest level the school can possibly manage. Therefore, Division I-AA is a good spot for the College.

However, the quality of individual players emerging from the Tribe (which has not won the conference or made the playoffs since 2010) may surprise some outsiders, as the College boasts no less than 10 players on National Football League rosters, as well as the Pittsburgh Steelers head coach, Mike Tomlin ’95, and  Carolina Panthers defensive coordinator, Sean McDermott ’98.

Cornerback emerges as the position of strength for the Tribe in the NFL, as Tomlin and two former Tribe corners have made the transition to professional football. The Dallas Cowboys drafted Cornerback B.W. Webb ‘10 in the fourth round with the 114th pick. Webb has since found a home with the Pittsburgh Steelers, providing him an ideal situation to become more than a special teams player.

Thus far, Webb has managed 26 tackles in special teams play.  With the Steeler’s secondary suffering from retirements, contract expirations and sub-par seasons, Webb has a legitimate chance to earn a starting spot as the No. 2 corner or the nickel this fall. While projected depth charts prior to the NFL Draft put Webb in the starting pair of corners, NFL.com and StillCurtain.com list Webb as the fourth cornerback.

Derek Cox ‘09 is currently a member of the New England Patriots and finds himself in a similarly favorable position to Webb. The Jacksonville Jaguars drafted Cox in the third round as the 73rd pick. In Jacksonville, Cox proved a productive player, accumulating 12 interceptions over his four seasons in 47 total games. After a year in San Diego, Cox bounced around the league before finally landing with the Patriots. As the most recent Super Bowl champions are parting ways with several players such as Darelle Revis, Kyle Arrington, and Brandon Browner, the opportunity is there for Cox to remerge as an NFL starting corner.

Jerome Couplin ‘14 provides Tribe fans with one more reason to watch the intriguing quagmire that is the Philadelphia Eagles franchise.

Jerome Couplin ‘14 provides Tribe fans with one more reason to watch the intriguing quagmire that is the Philadelphia Eagles franchise. After signing with the Detroit Lions last year as an undrafted free agent, Couplin caught the attention of Eagles head coach Chip Kelly, who brought in Couplin for the upcoming 2015 season.

Couplin was signed with four other safeties already on the roster; however, NJ.com says Couplin brings something unique to the Eagles – his wingspan. And that’s a real category; the distance from fingertips on one hand to the fingertips of the other when a player is standing with his arms horizontally outstretched. Couplin’s wingspan is 81 inches. To put that in perspective, only six players in the NFL have arms that long, and no safeties or corners in the past two years have boasted that kind of width. Though Couplin is a solid tackler and has already been dubbed “The Next Superhero” by Forbes, his coverage skills are less than stellar. Under Kelly, eyes will be watching to see if Couplin’s career as an Eagles’ starter.

Beyond the secondary, the Tribe has produced a trio of NFL-caliber defensive lineman in Sean Lissemore ‘10, Jasper Coleman ’15 and Mike Reilly ’15.

Lissemore is entering his sixth NFL season and has played in 58 games, racking up 119 total tackles and 6.5 sacks in that time. At 6-foot-, 3 and 303 pounds – the ideal build for a nose-tackle – Lissemore could be the answer the San Diego Chargers are searching for to shore up a soft run defense. NFL.com currently projects Lissemore to be the starter for the 2015 season. He is the only Tribe player expected to be at the top of an NFL depth chart. The Dallas Cowboys originally drafted Lissemore in the Seventh round with the 234th pick. However, behind Cowboys starter Jay Ratliff, Lissemore was underutilized by America’s Team and traded to the Chargers in 2013. The Cowboys never truly appreciated Lissemore’s unique skill sets, as the Tribe grad pulled in a pick-six for the Chargers in 2013.

Reilly and Coleman’s respective career paths appear much less certain. After neither player was drafted, both signed as free agents: Coleman became a Houston Texan, while Reilly signed with the Cleveland Browns. The pairing also shares something else in common: neither is likely to play their college position.

Reilly and Coleman also share something else in common: neither is likely to play their college position.

At 6-foot-4 and 290 lbs, Coleman is slightly on the smaller side for a NFL nose tackle in a 3-4 defense,  small enough at least that the Texans believe he would be a better fit as an end. Of course, the question as to which position would fit Coleman best is purely theoretical at this point, because he really has to fight to make this team. Players in front on Coleman on the depth chart include scrubs and nobodies like J.J. Watt and Vince Wilfork- so it is entirely likely that Coleman’s career will take off with some other franchise. For the time being, Tribe fans certainly hope the big man can get a foothold in Houston- and survive the first rounds of roster cuts.

Reilly also faces an uphill battle; and not just the being in Cleveland part. The 2014 CAA Defensive Player of the Year and All-American defensive end will now try his hand at stand-up linebacker in a 3-4 defense. This transition just might work, as Reilly has the second-most sacks in the College’s history with 27 in his career- and sacking the quarterback is a pretty significant portion of the outside linebacker job description.

Unfortunately, NFL.com’s draft profile was less than flattering of the 6-foot-4, 265 pound Tribe product, citing short arms and a tendency to lose gap responsibility in the run game. Reilly stands behind Barkevious Mingo and Paul Kruger at OLB on a defense that is surprisingly sturdy against the pass. Sadly, Reilly’s specialty as a pass rusher doesn’t suit the need of a Browns’ unit that got trampled on in the running game in 2014, so it’s difficult to be optimistic about his chances of seeing playing time this year. Reilly may still be able to scratch by roster cuts, but even if he doesn’t, at least he’ll be moving on from the Browns. A lot of people would be happy to do that.

They say you have to be smart to be an NFL quarterback, so R.J Archer ‘10 is putting his William and Mary degree to use as a backup quarterback with the Seattle Seahawks.

They say you have to be smart to be an NFL quarterback, so R.J Archer ‘10 is putting his William and Mary degree to use as a backup quarterback with the Seattle Seahawks. Archer, who led the Tribe to victory over UVA in 2009, went undrafted, but ended up signing with the Minnesota Vikings. Archer did not stay long in the Purple Nation, and after bouncing around arena football and a 2012 visit with the Lions, Archer finally found a roster spot in the Pacific Northwest. Archer could outplay Tavaris Jackson for the second-string spot, but barring a miracle (or disaster), Russel Wilson isn’t budging from the starting role. Archer will likely remain on the roster and the sidelines.

Mike Leach ‘00 (no, not the coach) has the other nine Tribe players beat by a mile in one category: age. At 38, the long snapper is still going strong in the NFL, entering another year with the Arizona Cardinals. Leach used to play tight end in the league, only switching to long snapper six years ago. However, he never caught a pass or registered any stats beyond a single kickoff return in 2000- (32 yards is pretty good though.) His team history includes the Tennessee Titans, the Denver Broncos and most recently the Arizona Cardinals.

Running back ain’t what it used to be. Although Jonathan Grimes ’12 holds all-time Tribe records in categories crucial to an offense’s success, including all-purpose yards (7,955), rushing yards (4,541), kickoff return yards (2,289) and rushing attempts (936), he has yet to land a starting job in the NFL. The former workhorse for the College will likely continue his backup role with the Houston Texans in the 2015 season, behind standout Arian Foster.

Grimes registered 39 carries in 2014 for a grand total of 153 yards after only 21 carries the previous season. This would normally be a positive sign, if not for fellow backup Alfred Blue rushing 169 times and the less-than-swift quarterback Ryan Fitzpatrick running 50 times on his own. However, Grimes has value as a receiving option since his meager six receptions disproportionately resulted in 86 yards, and he may yet find his way into a starting role. Rashad Jennings, a back from Liberty University, spent four seasons in irrelevance with the Jacksonville Jaguars before exploding into a starting role with the New York Giants. Grimes could have a similar career path.

Finally, last but not least, we’ll take a peek at receiver Tre McBride ’15. Of course, McBride is not new to being overlooked at this point, as the projected third-round pick plummeted to the seventh round before the Tennessee Titans were finally tuned in enough to select the College’s best weapon of 2015 with the 245th overall pick. McBride ranks second all-time in receptions (196), fifth in receiving yards (2,653), and sixth in touchdown catches (19) with the Tribe. With a 4.41-second 40-yard dash, 16 bench reps, and the NFL Combine’s best time for the 20-yard shuttle, the 6 foot tall, 210-pound McBride looked to be a sure-fit for franchises looking for a physical and fast receiver.

With a 4.41-second 40-yard dash, 16 bench reps, and the NFL Combine’s best time for the 20-yard shuttle, the 6 foot tall, 210-pound McBride looked to be a sure-fit for franchises looking for a physical and fast receiver.

However, the Tennessee Titans may have spent the 245th pick for luxury, as the team already boasts dominant receivers in Kendall Wright and Justin Hunter. It will be difficult for McBride to get on the field, especially since he has to outperform fellow rookie Dorial Green-Beckham out of Oklahoma, who was selected by the Titans with the 40th pick. Green-Beckham has a five-inch advantage on McBride and a blazing 4.49 40-yard dash for his massive frame. Yet despite these benefits, many scouts were uneasy about Green-Beckham’s character issues, a large part of the reason he fell to the second-round. Looking forward, McBride’s return skills provide him a niche to excel in with the Titans, and Tribe fans are certainly hoping that it won’t be long before hearing “Mariota to McBride” for touchdowns.