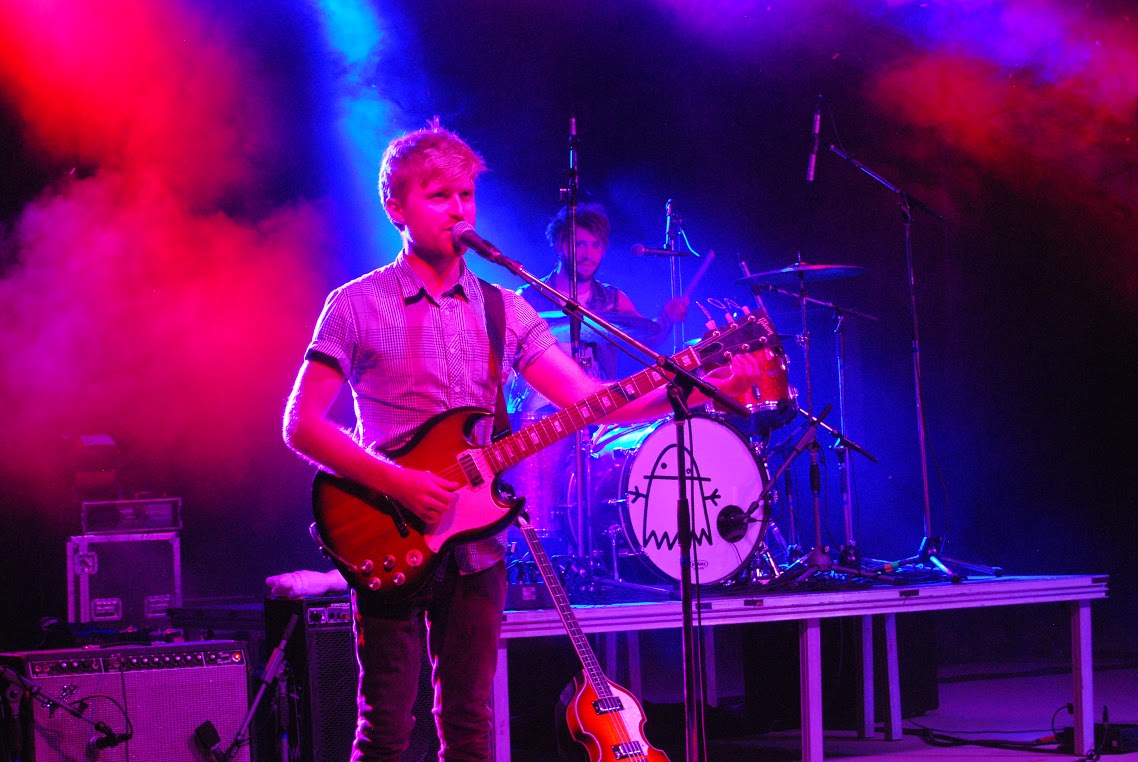 Amid swarms of buzzing mosquitos, Jukebox the Ghost played for the College of William and Mary this past Saturday, in what vocalist and keyboardist, Ben Thornewill, termed a “godforsaken swamp.”

Unsure of what to expect, given the success of past concerts, I scooted my way to the front of the amphitheater Saturday night and was shocked by how many Jukebox the Ghost shirts I saw worn by students. For a band you’d never heard of, I couldn’t believe how many people were buzzing with excitement.

I think you can attribute that excitement to the way Jukebox the Ghost approaches their performances and their interactions with their fans.

They’re accessible to the audience, not only in how they act on stage, but also in their willingness to meet with fans and chat by the merchandise table.

Their show was full of light banter between Thornewill and his bandmates. They didn’t take themselves too seriously, laughing at technical errors and adding songs to their set list on the fly.  They’re accessible to the audience, not only in how they act on stage, but also in their willingness to meet with fans and chat by the merchandise table.

I, personally, had seen Jukebox the Ghost perform as openers on two separate occasions in my hometown of Cincinnati, Ohio. Both times, Ben, Tommy and Jesse hung around in the crowd after the show, willing to talk to whomever for however long.

Even though I had seen Jukebox the Ghost play before, this show was unlike what I had heard in those past two performances. Their newest, self-titled album is a little bit of everything, with their signature quirky keyboard and inventive melodies, but now in a way that is geared more to a conventional pop audience.

Their performance last Saturday was, to say the least, anything but a conventional pop concert. Despite the muggy air and relentless cloud of insects, the concert felt like it was held in a small venue with the intimacy and casual nature of the band.

The experience was like watching your older brother and his cool friends play music and reminisce about their own college experience. Looking back on their own welcome weekend, guitarist Tommy Siegel recalled a memorable laser show of hippos, which then sparked a roaring chant of “hippos” from the enthusiastic crowd.

Though the band met as students at George Washington University, Seigel, a Richmond native, shared his own memories of the College. He had visited one of his best friends at William and Mary back in the day and, in true TWAMP fashion, both times were spent playing Scrabble. In response, chanting began again with a “let’s play Scrabble” from the same hippo-instigators. This time, Ben caught on as well and started vamping to the beat.

The whole concert was a string of similar quips and constant audience interaction.

Known as a band for doing random, odd covers (I’ve heard them cover “I Love You Always Forever” by Donna Lewis), we were treated to two different covers on Saturday. Following their cover of Queen’s “Don’t Stop Me Now,” a plug for their upcoming “HalloQueen” show, the band whipped out a Shania Twain song, citing their rule, “If you mention Shania Twain, you have to play Shania Twain.” It was truly amazing to hear three bearded white guys sing, “Man! I Feel Like a Woman.”

When I wasn’t giggling through the show, Jukebox the Ghost also tugged a little on my heartstrings, such as during the ballad, “Undeniable You,” for which Ben Thornewill went solo on the keyboard, and again when the rest of the band came back on stage to play their newest single, “The Great Unknown.”

In the midst of clapping, screaming and cheering, at the end of every song I was unable to stop overhearing gaggles of girls around me gush about their newfound love for the band – Ben Thornewill in particular. But, who wouldn’t have become a fan at a concert like that?