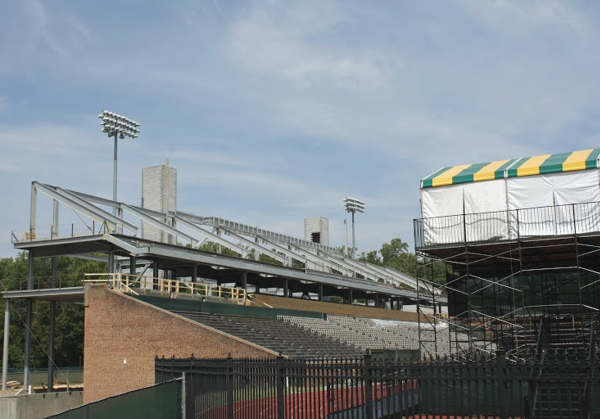 When football fans gather in Zable Stadium for the upcoming football season, they will notice a few changes taking shape. Zable is currently under construction, and a slew of renovations and additions are in progress.

Looking at the 2015 football season, only one part of the construction will be completed: the stadium’s east side center bathrooms, which have been renovated and will be available for patron use in 2015. Otherwise, the rest of the changes being made to Zable won’t be completed until right before the 2016 season.

One of the larger attractions featured in the construction plan is the addition of a concessions building on the east side of the stadium. While the concessions building will be structurally finished by this coming season, it will not become functional and open until 2016.

Access and movement is also addressed in the construction, as the bathrooms currently located in the north arcade will be removed after the 2015 season, allowing for easier access between the east and west sides of the stadium. Since bathrooms are being added during the construction, the removal of the arcade bathrooms is anticipated to not be an issue.

The additions include an upper bowl of seating on the north and south end, which will replace the portable stands, new restrooms, the concessions building, a new press box and a hospitality area. Facilities Planning, Design and Construction Mechanical Project Manager Mark Ballman explained that the new hospitality area will serve many functions.

Renovations to the field itself are not included in the Zable construction, but Ballman said the field is to be resurfaced and repainted this coming summer.

In terms of progress, Ballman stated that the brick on the outside of the concessions building is largely complete, most of the structural steel is in place, and most of the concrete has been laid on the platforms. Construction should wrap up by July 2016.

All of these renovations and additions are costing approximately $27 million. Around $23.4 million came in through donations, and the College will be picking up the rest of the balance. Director of Planning, Design and Construction Wayne Boy noted that this project is lean on support costs.

Boy explained that the Zable construction planning began back in 2013, when all of the funds became available. Previously in 2006, Facilities Management ran a Stadium Feasibility Study that simply allowed them to understand what they could do to the stadium.

“We’re very excited to see what the renovations will do for the game-day experience for everyone,” Whitson said in an email.

Zable Stadium was constructed back in 1935, and the story of how the College obtained the funding is an interesting one. William and Mary set out to build several new buildings across campus, petitioning the Public Works Administration under President Franklin Roosevelt; however, taxpayer dollars could not be used to create athletic fields. According to the Swem Archives, rumor says the College posed the stadium construction to appear as an agricultural project.

The last time Zable was renovated was back in 2006, with the change to a turf field, track replacement, addition of lights and the construction of the Laycock Center.

Boy highlighted how Zable is unique for a stadium in this day of age. He explained that on most campuses, athletic facilities are pushed to the edge, but Zable lies near the center of campus right by the Sadler Center, a hub for student activity. Boy also explained the intimacy of Zable in comparison with professional stadiums, a characteristic that will be preserved through the construction.

“You’re not allowed on the floor of the stadium in most stadiums today, and in ours you are,” Boy said. “And so we are going to retain that, but we’re going to enhance it with better seats, better concessions, better restroom amenities, better sound system…”

Both Boy and Ballman emphasized the fact that the construction is not aimed at creating an “over the top” fan experience.

Ballman said that the greatest outcome of this construction will be the enhanced fan experience for Zable stadium patrons. Associate Vice President of Communications and University Relations Brian Whitson similarly commented on the benefits afforded to spectators through the renovations.

“We’re very excited to see what the renovations will do for the game-day experience for everyone,” Whitson said in an email. “From the additional safety and accessibility features (wider aisles, additional hand rails, etc.) and improved bathrooms to the upgraded sound system and enhanced entrance, there will be a lot to look forward to for Tribe fans. Zable Stadium is a beautiful venue for a football game but it was in dire need of repairs. The renovations will improve the stadium and enhance the game-day experience while also allowing us to maintain its character and charm.”