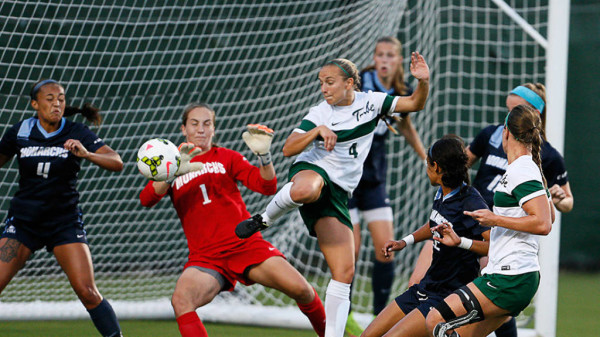 This year No. 25 William and Mary took approximately 23 days to surpass the achievements of four years ago out on the pitch. After garnering recognition in the national rankings last week, the Tribe held onto the honor in victories against Old Dominion on Friday and Harvard on Sunday, marking the first time since 2011 that the Tribe has been ranked and won the next game.

The homestead weekend began with a physical 3-0 shutout Friday night against the Monarchs at Martin Family Stadium, where the Tribe (6-1-1) returned to slip by Harvard in a 1-0 nail-biter on Sunday afternoon.

Though the scoreboard said otherwise, Old Dominion was anything but a stress-free endeavor. The last time the Tribe held a national ranking was in 2012, when it entered the season at No. 20 before an season-opening 4-1 loss to Duke.

But on Friday night, the Tribe offense put the hype behind them and cranked up the pressure on the Monarchs. Sophomore forward Sammi Grasso nearly scored in the 10th minute, firing a shot off of a cross that barely sailed left. Just over a minute later, senior midfielder Nicole Baxter floated a long ball off a free kick right into the box. Despite the ensuing collisions, the Monarch keeper managed to punch the ball away.

It was only a matter of time before both Baxter and Grasso made their mark. Off a corner kick 12 minutes in, Baxter fired in a low line drive right towards the box. Grasso rushed out to meet the pass, back-heeling the ball past the near-post for the Tribe’s opening goal.

The College nearly struck again just two minutes later, as senior forward Samantha Cordum received a long pass up from sophomore back Haley Kent after a steal. Cordum outran her defender to the ball but added just one touch too many as the Monarch keeper managed to jump on the ball before the shot.

Cordum was not to be denied again. At the 17th minute, Grasso fired a through ball up to Cordum racing towards the goal. Cordum’s defender was in hot pursuit and took away the angle for a shot, but with a last minute sliding pass, Cordum centered the ball to senior midfielder Leci Irvin who was sprinting down the middle of the field.

“I saw Sam get a through ball, and since she’s so fast I knew she would beat her player,” Irvin said. “You have to follow just in case she gets anything off. I saw her get around and pass it back to me, and I was just in position to finish it. “

Irvin edged out her defender and slid into the shot, rocketing the ball into the top left corner for a 2-0 Tribe lead.

“I saw Sam get a through ball, and since she’s so fast I knew she would beat her player,” Irvin said.

Led by senior back Meghan Musgrove, the Tribe defense suffocated the Monarch attack in the first half, allowing only a single shot.

“First half I thought we were really good, as good as we’ve played all season,” Daly said.

In the second half, William and Mary began to work backup players into the rotation, a major reason for ODU’s 10 second half shots. Senior keeper Caroline Casey rejected every single one and rushed out of the goal to pick off crosses as well. Cordum added the coup-de-grace in the 60th minute off a pass from senior forward Katie Johnston, slipping the ball past the charging Monarch keeper.

Kent preserved the shutout in the 64th minute, kicking out a shot after Casey dove. The Tribe claimed the win 3-0, and set its sights on Harvard for Sunday.

“Harvard is very good,” Daly said. “Duke is the best team we play, and Harvard is not far behind them. They have one particularly good player Margaret Purce; she’s a real handful. I hope [Harvard is] getting very tired tonight [at U.Va].”

Harvard managed the first five shots of the contest, but the Tribe landed the shot that counted in Sunday’s 1-0 victory.  Johnston, who managed the first Tribe shot in the 21st minute, fired the game-winner in the 35th, assisted by junior midfielder Haley Kavanaugh.

Baxter and Grasso nearly doubled the score in the 54th minute, but Baxter’s free kick hit the crossbar instead, bouncing down to Grasso who shot just wide.

The Crimson didn’t give up in the 90th minute, placing every player in William and Mary’s half of the field. Casey preserved the shutout for the Tribe, assisted by goaline saves by Johnston and Grasso.

The victory marks William and Mary’s sixth shutout of the season, already tied with last year’s mark. Casey received the honor of Colonial Athletic Association Player of the Week for her performance this weekend, recording five saves against ODU and a career-high-tying seven saves in rejecting Harvard’s comeback bid.

Up next for the nationally-ranked Tribe is a matchup at Princeton Sunday at 1 p.m. Though the Tribe has been strong of late, the College is by no means resting on its laurels.

“If we’re No. 25 in the first week of November, okay, then I’ll say great, but it really just puts a target on your back,” Daly said.  “It’s a matter of opinions and doesn’t mean anything except that you doing pretty well.”