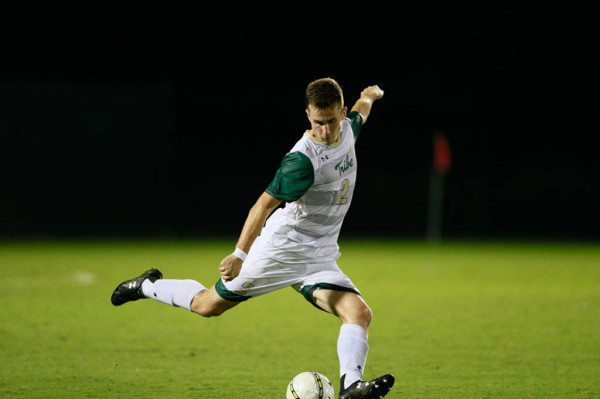 After the team held its own in a draw at No. 4 North Carolina last week, William and Mary traveled to the Carolinas again to play another nationally-ranked opponent, No. 7 Coastal Carolina. The Tribe fell to the Chanticleers in a 2-0 shutout in Conway, South Carolina, Saturday night.

In the first half of the game, the Tribe (1-2-1) kept up an aggressive attack but didn’t produce a goal prior to the break. The match’s first shot-on-goal came in the 10th minute from senior forward Jackson Eskay, which was saved by Coastal Carolina’s keeper Fernando Pina. Both teams kept up strong pressure on the other, but the Tribe found more shot opportunities in the first 45 minutes, outshooting the Chanticleers (4-0-1) by a 5-1 margin, with the Tribe defense preventing any attempted shots on target. At the half, the scoreboard read 0-0.

In the second half, the Tribe proved outmatched and surrendered two goals. Head coach Chris Norris attributed the Tribe’s unraveling to a shift in the Chanticleers’ pace of play.

“We had a good first half tonight, but did not cap it off with a goal,” Norris told Tribe Athletics. “Coastal started the second half with more urgency, making it difficult for us to find our front players.”

“Coastal started the second half with more urgency, making it difficult for us to find our front players.”

Coming out of the locker room, Coastal Carolina indeed appeared to increase its speed of play, firing a shot two minutes into the second half that went wide followed by a 57th minute goal after an exchange of several fouls. Junior goalkeeper Mac Phillips couldn’t prevent the shot from going in as the Chanticleers kicked the ball to the low right of the net, giving Coastal Carolina a 1-0 lead over the Tribe.

“[Coastal Carolina’s] goal energized them and force[d] us to chase the game,” Norris said. “Unfortunately, we came up a little short … In many ways, they were the most difficult team against which we have played.”

“[Coastal Carolina’s] goal energized them and force[d] us to chase the game,” Norris said. “Unfortunately, we came up a little short … In many ways, they were the most difficult team against which we have played.”

For the remainder of the match, the Tribe played catch-up, trying to at least add another draw to its record with a tying goal. The best chances to score came in the 73rd minute. Freshman defender Marcel Berry fired a shot on goal, but Pina added another save to the night instead. Jackson Eskay took possession as a result of Berry’s missed shot and took one of his own, but Pina once again prevented a William and Mary goal.

Just when the game appeared it would end 1-0, the Chanticleers’ Jair Espinoza, who made the first goal, saw an opportunity and fired another shot into an empty Tribe net in the 90th minute, taking the 2-0 victory over the unranked College squad.

In the aftermath of the second half, William and Mary was outshot 14-10 on the night and 6-3 on shots-on-goal. Phillips made four second half saves.

Up next, the College returns home to Martin Family Stadium for a midweek game against Conference-USA foe Charlotte (2-2), scheduled for Tuesday at 7 p.m.