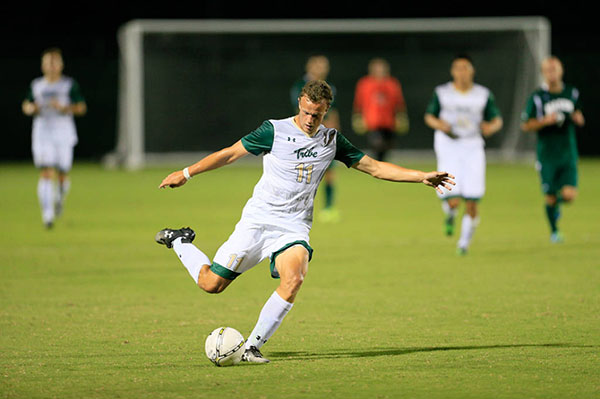 In 2013 William and Mary completed the perfect underdog story, defeating the previously undefeated No. 1 University of North Carolina 1-0. In the early goings of this season, the Tribe (1-1-1) underwent a little déjà vu, once again finding itself against an undefeated No. 4 Tar Heels (3-0-1) team on the road. This time around the two clubs played to a 1-1 draw.

Although the final score didn’t show it, the game had many opportunities to be a much higher-scoring affair. In the eighth minute, the Tribe attempted to score the first goal of the night off a corner kick from sophomore forward William Eskay.  However, UNC’s keeper James Pyle managed to save it and keep the match scoreless. Not to be outdone, the Tar Heels found a chance to get themselves on the board a short while afterwards in the 15th minute.  Nico Melo got a great shot off, which was blocked by junior goalkeeper Mac Phillips.

In the 44th minute, a goal from freshman forward Ryder Bell put the Tribe ahead.

In the 44th minute, a goal from freshman forward Ryder Bell put the Tribe ahead. Teamwork made the moment possible, as Bell received a one-touch pass from William Eskay. It was Bell’s second goal of the season.

UNC evened the odds shortly after with a goal right before halftime. Tucker Hume sent a header at the goal that was saved by Phillips. The rebound, however, was headed into the back of the net by Jonathan Campbell before Phillips had time to reset and defend.

Bell almost put up his second goal of the night in the 61st minute; however, his shot bounced off the crossbar. As the game wound down, the Tribe had to rely on stellar plays from its goalkeeper to keep the score even.  In the final minutes Philips turned away shots from UNC’s Omar Holness, Jordan McCray and finally a big shot from Hume.  The College attempted one more shot during regulation time, but it was blocked.

In the first overtime period, the Tribe was not able to get a shot off.  The Tar Heels managed to get a shot at goal from a corner kick, which sailed high. William and Mary made up for its lack of shots with three in the second overtime period, while UNC got another two goal-scoring chances. However, neither team could convert their opportunities into goals, and the game ended at 1-1.

The Tribe continues its road trip on Saturday, Sept. 12 as it travels to Coastal Carolina. Kickoff is set for 7 p.m.