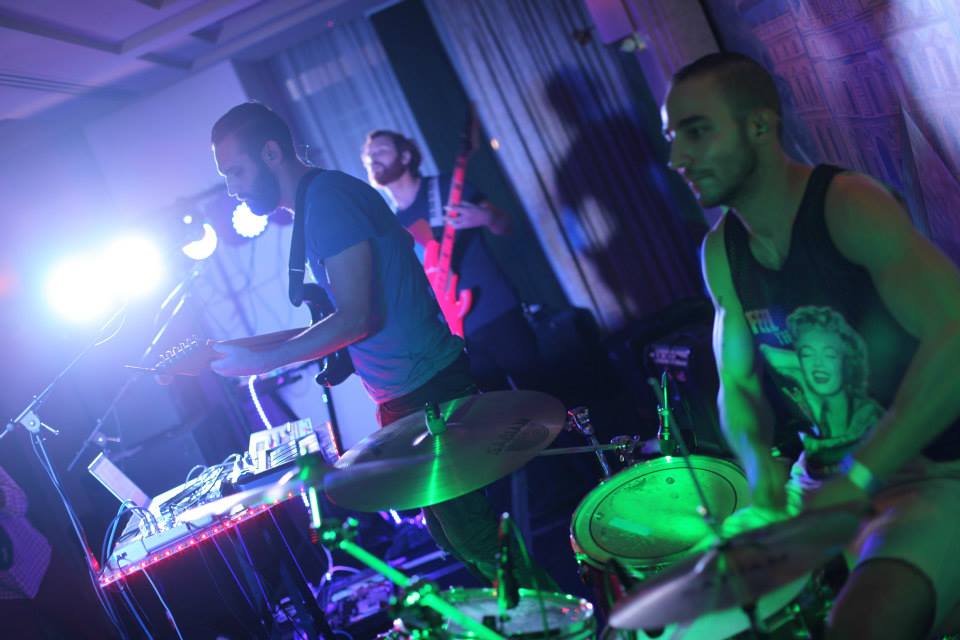 AMP’s Fridays at Five concert series welcomes graduate Paul Burgess ’12 back to campus Friday September 18 as a member of the band Honest Haloway.

Burgess joined the band just over a year ago, and has since been playing with the other two members at various venues around the D.C. area. Before joining Honest Haloway, Burgess was part of a different band operating out of D.C.

“We played a show with Honest Haloway and got to know the guys, and became sort of music-scene friends that way,” Burgess said.

A year and a half ago, Burgess’s band broke up, and he then reached out to Honest Haloway.

“I found out Honest Haloway was trying to fill a multi-instrumental spot so I reached out and ended up joining up with the other two guys from the band,” Burgess said.

Tim Kratzer, the band’s front man and singer, started the band in his home studio.

“[It was] kind of bedroom chillwave type of stuff, and it slowly formed into a band … Slowly I had met the drummer and then had some bassists that went in and out but then I met [Burgess] and that’s when it really kind of formed into a full band,” Kratzer said. “Paul was like the last piece.”

Kratzer first met Burgess when playing on a show promoted by Kick Kick Snare, and Burgess then responded to Kratzer’s Craigslist ad for a new bassist a year later.

“He was the first person I decided to meet up and play, and I had seven or eight responses, but since I already knew him and we started playing and he was a really great musician I didn’t bother rehearsing with anyone else,” Kratzer said.

Honest Haloway has been together for around three years, and Burgess joined as a bassist, although he doesn’t just stick to one instrument.

“I get to hop around a bit, I do some synth and I play guitar in a couple of songs and do backup vocals,” Burgess said.

The band’s first album was created primarily by the singer, Kratzer, who wrote and recorded the entire first EP before playing live.

“We’ve got two EPs out and we’re working on our first full-length [album],” Burgess said.

Burgess has been playing with the band since their second EP, “Perigee.”

Before getting a full-time job in international development in D.C. and joining a band, Burgess  —  an international relations and economics major — was a part of the College’s music scene as a student.

“I was in a couple of bands that I was singing and playing bass in while I was at school, with varying levels of success,” Burgess said.

One of Burgess’s college bands was called The Passives, comprised of him and a few of his friends from around campus. According to Burgess, they only played a few shows on campus, as it was toward the end of his time at the College.

“The other one was more of a crust punk band that just played at Meridian a lot, even though I was like the odd man out in that,” Burgess said.

Crust punk, a hardcore punk and metal genre, was only one of Burgess’s many musical endeavors on campus.

“For most of my time [at the College] I was really entrenched in music stuff,” Burgess said.

Burgess was in the a cappella group Cleftomaniacs, was the Vice President of the a cappella council, sang in the Botetourt Chamber Singers, was a member of the Sinfonicron light opera and also played in the various aforementioned band.

“I was pretty much busy doing anything unrelated to my major whenever possible,” Burgess said.

I was pretty much busy doing anything unrelated to my major whenever possible.

The Director of the Botetourt Chamber Singers and the Chair of the Music Department, Dr. Jamie Bartlett, remembers Burgess from his time at the College.

“I remember Paul because he was unsure when he first came about of the level of his musical ability in terms of sight reading,” Bartlett said. “He was a great singer, but in terms of being able to read through the music …  he used to come and work with me independently.”

Bartlett recalls Burgess’s time on campus due to the amount of time she spends with the Botetourt Chamber Singers and the relatively small size of the group at 18 members.

“He was very very diligent and music meant a lot to him,” said Bartlett. “He always had the capacity, it was just a confidence thing that he needed.”

Burgess, once involved in a variety of musical groups on campus, believes there was a lack of venues for non-vocal groups.

“I remember AMP booking a lot of great shows, but as far as student musical groups go, it was pretty dominated by vocal groups,” Burgess said. “I didn’t see a lot of bands from the College and when I did it was just at the Meridian, there really [weren’t] any other venues in the area which is kind of a shame.”

According to Bartlett, 25 percent of the students on campus are officially involved in music in some way, not including vocal or other musical groups.

“Most of our students go off in some kind of non-professional way,” Bartlett said. “It’s a vocational thing, and they just have to be participating in music.”

Aside from Honest Haloway, Burgess is also working on two side musical projects.

In regards to pursuing music after college, Burgess said, “Keep an eye out, or don’t pigeonhole yourselves into just performance, because there’s so many opportunities for internships in recording studios, music promotion at clubs and things like that.”

Other graduates from the College are currently involved in musical careers, including Kanene Donehey Pipkin ’07, a member of the musical group the Lone Bellow, who have appeared on David Letterman and are currently touring the country.