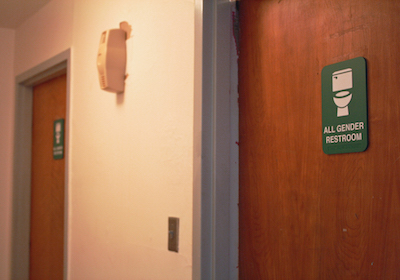 All around the College of William and Mary’s campus, single occupancy restrooms and shower facilities are being designated as gender neutral.

Gender-neutral bathrooms now exist in many of the major academic and student service buildings, including the Campus Center, Sadler Center, Earl Gregg Swem Library, Alan B. Miller Hall, the Student Recreation Center and all three floors of the Integrated Science Center. They can also be found in a majority of residence halls throughout campus.

According to Associate Director for Diversity Education Margaret Cook, the process of designating single-occupancy restrooms as gender-neutral has been an ongoing effort that was initiated several years ago.

The change to gender-neutral primarily involves altering the signs designating male and female bathrooms — some bathrooms are now labeled as “gender-neutral,” or “all gender restrooms”. The traditional stick figure images depicting a man and a woman have been replaced by other images, such as that of a toilet, in many places.

“For students who are trans and gender non-binary, it’s not always comfortable or safe for them to use bathrooms that are gendered, so this is going to provide a safer environment, which is good for the whole school and not just for that select group of people,” Lopez said.

Cook said that the project was designed to create a more accommodating environment for students across the gender spectrum.

“This project is an effort to ensure that we offer easily accessible gender-neutral facilities across campus in order to provide an inclusive and respectful campus environment that is responsive to the needs of our community,” Cook said in an email. “Gender neutral restrooms provide safe, private facilities for individuals who experience discomfort or are challenged in gender-designated facilities. In short, everyone deserves safe, dignified access to restrooms.”

Kat Contreras ’15 said she began working with Cook in the Center for Student Diversity to document single-occupancy bathrooms on campus, which they then brought to the administration’s attention.

“There was only a rudimentary, not-recently-updated list on the school’s website, and I knew of several bathrooms that weren’t listed at all,” Contreras said in an email. “I wasn’t sure at first that we’d be able to change gendered signs to gender neutral, so I made sure to note what gender was signified so people knew what to look for. … Some were identified by a picture of a toilet, some just numbers, and some by an “M” or “W.” The lack of standardization in bathroom signage was confusing, and I’m sure would be very difficult to find if a student was in a rush for one.”

Contreras said that her goals were to create an updated list and map of neutral bathrooms to be published on the College’s website and to make all single-occupancy bathrooms gender neutral. She said she was motivated by compassion for people who feel uncomfortable with traditional bathroom divisions.

“I was moved by a friend of mine, who once told me the story of having to find a single-occupancy bathroom on Old Campus … and how they sprinted to Wren daily to use one,” she said. “They didn’t feel comfortable using the men’s or women’s bathrooms because they were transgender, and worried that they didn’t ‘pass’ enough to use one and didn’t identify with the other … I’d never thought of using the bathrooms on campus as such a struggle before, and I really hated the idea that while something was so easy for me, it was so stupidly difficult for my friend.”

LGBTQ advocate groups, like Lambda Alliance, have spoken in support of the new change. Co-President of the Lambda Alliance Kyle Lopez ’17 said that gender-neutral bathrooms have the potential to help accommodate non-cisgender students.

“I’d never thought of using the bathrooms on campus as such a struggle before, and I really hated the idea that while something was so easy for me, it was so stupidly difficult for my friend,” Contreras said.

“For students who are trans and gender non-binary, it’s not always comfortable or safe for them to use bathrooms that are gendered, so this is going to provide a safer environment, which is good for the whole school and not just for that select group of people,” Lopez said in an email.

Lopez mentioned in a follow-up email that the next step for the Lambda Alliance and other queer advocacy groups is to support gender-neutral housing on campus.

“Currently, trans students have to meet with an admin to ‘prove’ their trans status, in a way,” Lopez said. “The answer with AH [the Adaptive Housing Policy] is often to give trans students a single in a gendered hall that they don’t identify with, which isn’t so helpful to them and can force them to out themselves.”

Lopez said he thinks having a few multiple-occupancy gender-neutral bathrooms on campus would be helpful.

“I recognize that a lot of people are uncomfortable with the idea of using mixed-gender multiple-occupancy bathrooms and definitely acknowledge that they aren’t for everyone. Having said that, having even a few available on campus would be a really great resource for gender non-binary students and wouldn’t infringe on the availability of gender-separated bathroom[s],” Lopez said.

“I would be concerned about how comfortable the rest of the student body who do subscribe to the gender binary, how that would impact their experience if the [administration] did more with communal stall bathrooms or dorms,” Hall said. “But now with the steps they’ve taken, I don’t think it’s made anyone else uncomfortable, and it’s a good thing if it’s made people that don’t subscribe to the binary more comfortable.”