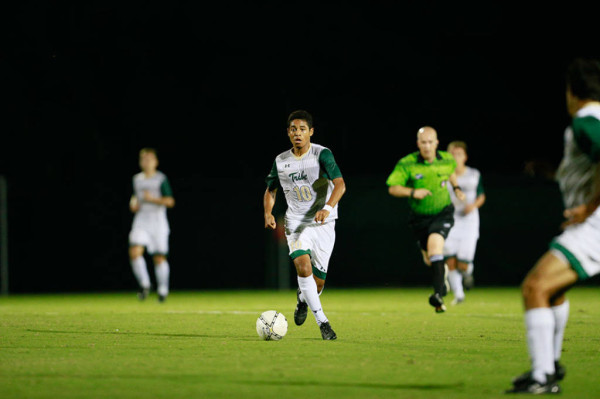 In the first seven games of 2015, the College of William and Mary has already entered overtime four times. The first pair of overtime games concluded as draws, but the Tribe must like the recent trend as the last two matches had the same result: a golden goal victory by a 3-2 margin. Tuesday night, the Tribe (3-2-2) defeated Navy in Annapolis, Md. as freshman forward Antonio Bustamante scored the winning goal in the 103rd minute during the second overtime period.

Both teams played evenly in the first half on both sides of the ball, neither scoring a goal. Navy (3-4-1) started the night’s shooting in the ninth minute over the crossbar. Sophomore forward William Eskay almost scored in the 21st minute with a shot-on-goal, but it was saved by Navy keeper Jackson Morgan. There were only two additional shots made during the first 45 minutes, one per team. Junior forward Reilly Maw’s shot went wide in the 33rd minute, while Navy’s shot in the 35th minute was blocked.

After the break, freshman forward Ryder Bell added his fourth goal of the season in the 57th minute, receiving the ball from Jackson Eskay and pushing the ball into Navy’s goal with his chest. Five minutes later, Navy’s Daniel Kwon scored the equalizer off the bench on redshirt-junior keeper Mac Phillips.

At 1-1 the Tribe continued to dominate possession, with the majority of play occurring in Navy’s half. After six scoreless games, Jackson Eskay fired off his first goal of the season in the 63rd minute as he dribbled along the left and shot from a close distance. The lead did not last long as the fourth goal in a 10-minute period was scored by Navy’s Mark Shiiba, tying the match at 2-2 as the ball slammed into net just on the scoring side of the post.

the College made no shots during the 10 minutes, but Phillips made a crucial save 15 seconds into overtime.

The last half hour of regulation saw many shots but no goals. Jackson Eskay and Bustamante both had solid opportunities in the 68th and 71st minutes, respectively, but Morgan saved them both. Bustamante fired another shot-on-goal as a last-ditch effort to prevent overtime in the 83rd minute, but Morgan came up with the save again. Phillips also added two saves during regulation. After 90 minutes, the game entered its first of two 10-minute, golden goal-style overtime periods.

The first overtime played out similar to the first 45 minutes with no goals and limited shots. In fact the College made no shots during the 10 minutes, but Phillips made a crucial save 15 seconds into overtime.

As the second overtime period started, William and Mary looked determined to finish with a positive result rather than another draw. As freshman midfielder Marcel Berry took possession, he found William Eskay in Navy territory. The younger Eskay found his brother, and Jackson Eskay encroached on the goal. Navy’s back line and goalkeeper stepped close to defend the net from Jackson Eskay, but he did not shoot, instead executing a quick lateral pass to Bustamante for the open-net shot for his third goal of the year and first collegiate golden goal. The final score was 3-2, giving the Tribe a morale boost as it heads into Colonial Athletic Association matches.

“We are very happy to come out on the winning side of a very hard-fought game tonight,” head coach Chris Norris said to Tribe Athletics. “Fortunately, when we needed big plays, we were able to come up with them more often than not.”

The Tribe travels to Charleston, S.C. for the final leg of its three-game road stretch to play CAA foe College of Charleston (3-3-1), scheduled to start at 7 p.m. Saturday.