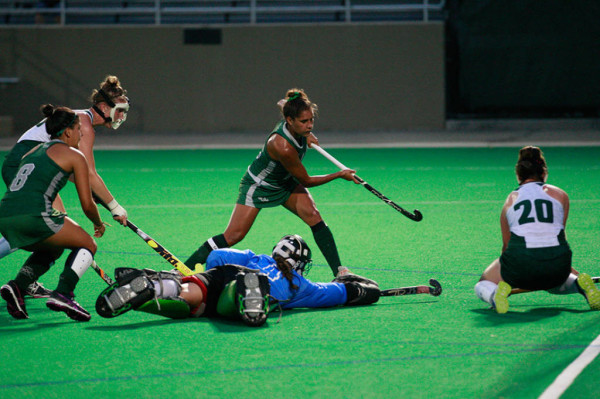 The undefeated Cavaliers (8-0, 2-0 ACC) wasted no time jumping ahead 54 seconds after the opening whistle. Virginia midfielder Tara Vittese maneuvered around senior goalkeeper Meredith Savage, laying the ball off to midfielder Lucy Hyams to tap into the open cage. Hyams almost doubled the Cavaliers’ lead just over one and a half minutes later, but this time Savage was there to make the save.

Vittesse got herself on the scoresheet in the 15th minute, once again showing off her dribbling skills to make space for a shot that sailed past Savage into the goal. It was Vittesse’s ACC-leading seventh goal of the season. Less than three minutes later, the Cavaliers scored again, as striker Caleigh Foust directed the ball toward the back post and found teammate striker Riley Tata to put the Tribe behind 3-0 less than 18 minutes into the match.

The Tribe offense created very few chances in the first half against the stout Cavalier defense, only shooting twice. Nevertheless one of those shots found the back of the net, as senior forward Pippin Saunders put the Tribe on the board with her seventh goal of the season in the final minute of the period. In a half that featured only six shots and zero penalty corners, the 3-1 scoreboard after the first 35 minutes was unusual.

The second half featured more chances for both teams but ironically only produced two goals. The Tribe came out of the break aggressive and poised for a comeback, taking 10 shots and six penalty corners in the period. However it was the Cavaliers who once again tallied first as Vittesse continued to terrorize the Tribe back line, assisting Virginia midfielder Katie Kelly to restore their three-goal lead in the 39th minute. Virginia goalkeeper Carrera Lucas, a second-half substitute, put on a clinic, making four saves in a six-minute span.

The Tribe’s continuous pressure finally paid off in the 51st minute, as Saunders sent a laser past Lucas following a penalty corner. Saunders’ eighth tally of the campaign moved her into second place for goals in the Colonial Athletic Association, behind only Delaware’s Lisa Giezeman. Senior defender Peyton Smith collected her second assist of the season.

The last 20 minutes featured plenty of action but no more goals. Both teams mustered four shots apiece; however, Savage came up with two crucial saves and the Cavalier back line amassed several key blocks. Two players were booked as the game came to a close, as Virginia back Jennie Blackwood picked up a green card in the 63rd minute while the College’s sophomore midfielder Emma MacLeod received a yellow card three minutes later. When the final whistle blew, the scoreboard read 4-2 in favor of Virginia.

The Tribe returns home to Busch Field Friday to face Richmond. The game is slated for a 6 p.m. start. The College recently was rated No. 28 in the NCAA’s first Rating Percentage Index report of the season; the Spiders are No. 15 on the same list.