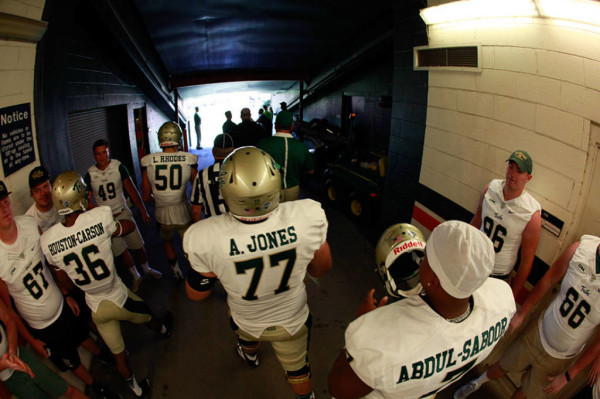 With the heartbreaking 35-29 loss at Virginia firmly in the rearview, Football Bowl Subdivison Coaches Poll No. 25 William and Mary (1-1) looks to regroup and refocus in preparation for the visiting Seawolves of Stony Brook for the first home game of the 2015 season. Stony Brook (2-0, 1-0 CAA) is off to a strong start, including a Colonial Athletic Association upset of then-No.13 New Hampshire by a blowout score of 31-6. Meanwhile, the big question in Williamsburg remains: How quickly can the Tribe move on from such an intense and emotional loss against the Cavaliers?

After two weeks of preparation went up in smoke courtesy of U.Va tailback Taquan “Smoke” Mizzell gouging the Tribe with an 80-yard screen touchdown reception, the College will be searching for an answer to stop Seawolves’ running back Stacey Bedell, who racked up 191 yards on just 21 carries against New Hampshire.

With injuries effecting both starting outside linebackers, seniors Ian Haislip and Zach Fetters, the Tribe faces some serious challenges in terms of defending the run, particularly outside the tackle box. Senior captain and middle linebacker Luke Rhodes has certainly held his own thus far, but the early-season injuries are definitely a foreboding development for the run defense. Redshirt-freshman outside linebacker Josh Dulaney has shown a lot of potential from the weak side position, hauling in an interception against the Cavaliers last weekend.

How well William and Mary can contain the Seawolves’ run game will likely determine the outcome of the game.

Last season, Stony Brook and the Tribe squared off in a Sept. 27 matchup in New York, where the College finally claimed the 27-21 victory in overtime off a 13-yard run by senior tailback Mikal Abdul-Saboor.

Last season, Stony Brook and the Tribe squared off in a Sept. 27 matchup in New York, where the College finally claimed the 27-21 victory in overtime off a 13-yard run by senior tailback Mikal Abdul-Saboor. Junior quarterback Steve Cluley pulled through in the clutch with a touchdown strike with 21 seconds in the fourth quarter to send the game to overtime.

Though New Hampshire finished 2014 as the top team in the CAA with a 12-2 record, a perfect 8-0 record in the conference and a semifinalist finish in the FCS playoffs, the lopsided loss to Stony Brook may fit the criteria for a fluke rather than marking the emergence of the Seawolves as the new powerhouse of the CAA. Stony Brook has a talented team, but the loss of New Hampshire quarterback Sean Goldrich early in the first half doomed the Wildcats’ efforts. New Hampshire never seriously threatened the Seawolves without its starting gunslinger.

Stony Brook’s defense is talented and the College will have to contain defensive lineman Victor Ochi, who shattered the New Hampshire offense to the tune of 3.5 sacks and 11 tackles. However, the Tribe offense has reason to be confident as the offensive line fought with the blitz-happy Cavaliers last week and still racked up 371 yards of total offense. If Cluley continues to make smart decisions in the pocket and not turn over the ball, the College has a solid chance to avoid a rocky start against the Stony Brook defense.

The game kicks off at 7 p.m. Saturday at Zable Stadium as part of William and Mary’s Family Weekend events.