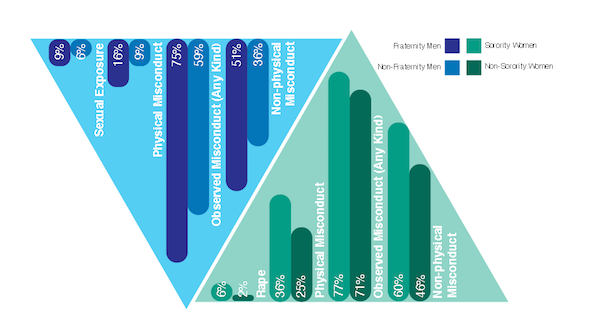 The campus-wide Sexual Misconduct Climate Survey data released earlier this month showed that women affiliated with social sororities are 31 percent more likely to be sexually assaulted and have a 154 percent higher chance of being raped than non-affiliated women.

Within the campus climate subcommittee’s recommendations are measures to target specific subpopulations shown to be at a higher risk of experiencing sexual misconduct than the rest of the student population. The subcommittee compared groups based on socio-economic status, race/ethnicity, athletic team membership, gender and degree level. The survey did not allow for comparison of LGBTQ communities.

Of all the subgroups studied, Greek-life affiliation showed the most significant differences. Chair of the Campus Climate Subcommittee and Assistant to the Vice President of Student Affairs and Director of Student Affairs Planning and Assessment Jodi Fisler said these findings about Greek life weren’t surprising given national trends.

Alex Greenspan ’15 served on the subcommittee and also as Interfraternity Council President in 2014. He said he believes alcohol is a main reason that the survey data showed what it did.

“It seems to me it’s a combination of a lot of access to alcohol — and alcohol is often a part of some of these situations,” Greenspan said. “It’s used as a way to remove consent in more malignant circumstances and in less intentional cases it’s just someone no longer can consent and the other party doesn’t know enough about the definition of consent to be able to make a good decision about it.”

In the National College Health Assessment survey sent to 4,000 randomly chosen undergraduates last year, sorority women who drink reported doing more sexually than they had planned because of alcohol at nearly twice the rate of unaffiliated women, 42 and 23 percent respectively. The rate was slightly higher for fraternity men who drink — 45 percent — compared to unaffiliated men who drink at 23 percent. Fisler’s statements agreed with Greenspan’s, though she said she didn’t want to overstate the effect of alcohol because assaults do still happen without it.

“I think given all the information that we know given the relationship between alcohol and campus sexual assault, it would be really hard to say that that’s not a factor,” Fisler said. “The work that we’ve been doing on the alcohol culture over the last couple of year, looking at this as well, we see that the members of Greek organizations are drinking at much higher rates than non-affiliated members.”

“I think you have these two parties — one group who hears nothing [about sexual assault] because they’re not someone who can be trusted and so they assume nothing is going on and they defiantly believe that and deny that it’s happening,” Greenspan said. “That’s what I was dealing with a lot in the Greek community.”

Fisler said the delay is not mandated and that another option that would decrease the vulnerability of fraternity and sorority communities would be considered. She explained that the delay would create more time for members to receive the necessary training and for potential new members to mature and become educated before they immerse themselves in completely new environments and relationships.

IFC President Paul Naisbitt ’16 said Panhellenic Council, IFC and National Pan-Hellenic Council are creating a task force designed to identify and target key areas within the Greek community to prevent sexual assault, which will be finalized by the end of the week. He said the recommendations are not a mandate and that the group chosen will be the decision-makers regarding recruitment.

“The group of Greek students who will be moving forward with this issue will examine this recommendation more in depth and we, as a Greek community, will decide if recruitment needs restructuring,” Naisbitt said in an email.

According to Panhellenic Council President Kendall Carter ’17, last year’s programming included bringing the College’s Title IX Chief Compliance Officer Kiersten Boyce to speak at a council meeting. She also said the Council teamed together with IFC to bring “Speak About It,” a group that performs about consent, boundaries and healthy relationships, to campus March 26.

“Looking ahead, both the task force and the Panhellenic council will be exploring our options for programming, in hopes of finding what will be most impactful and sustainable for our community,” Carter said in an email.

Greenspan said that during his time as IFC president he created a bylaw requiring fraternity chapters to be educated annually  on sexual misconduct. He said that this legislation was met with resistance from some of the chapters.

“I think you have these two parties — one group who hears nothing [about sexual assault] because they’re not someone who can be trusted and so they assume nothing is going on and they defiantly believe that and deny that it’s happening,” Greenspan said. “That’s what I was dealing with a lot in the Greek community. … I had to create something pretty well-rounded — a good education program that would have fraternity members develop this sense of responsibility of protecting people at their events greater than just a legal mandate.”

The education resolution passed within IFC stated that all chapters must have annual sexual assault prevention and awareness training from any recognized group, according to Naisbitt. He said that a large majority of fraternities completed the training in 2014 and that most are also compliant for 2015.

Greek communities also stood out in another data set from the survey. The climate survey data quantified how differently men and women feel each gender is respected on campus. Fisler said that she thought that data was the most telling for the status of the College’s campus climate.

“The fact that all respondent groups felt that women were treated with less respect than men is disconcerting,” Carter said in an email. “As the largest women’s organization on campus, sorority women provide important insight into a problem that, based on the data, is campus-wide.”

Although the Greek communities stood out in the climate survey, the NCHA data revealed that other populations also experience significant rates of sexual assault. The data showed that LGBTQ communities experienced sexual assault at the same rates as the other populations. Of NCHA respondents, 1,111 identified as heterosexual, 106 as bisexual, 53 as gay/lesbian, and 63 as unsure. Fisler said that the additional barrier to reporting, as revealed in the focus groups, for people who identify as LGBTQ is understandable but troubling.

“Because there is the additional level of if someone’s not ready — if they’re not out to everybody — what does this mean if they then report an incident that occurred? And this could be true whether not they identify as LGBTQ, but if you have a male on male or female on female assault, what will people think if this gets out? And it may be that the person is gay or lesbian, or not, but either way if they’re not ready for people to think they are that can be a big barrier,” Fisler said.

She said that as education and prevention measures are determined, it is important to make clear that sexual misconduct is not a heterosexual problem. Greenspan said he was surprised that the stark differences in Greek communities’ experiences were not highlighted more, but Fisler said it was important to remember that sexual misconduct happens to all subpopulations.

“We should not allow ourselves to be drawn only to where the high numbers are because there were very real people experiencing things in populations that are experiencing [misconduct] to a lesser rate,” Fisler said. “We keep saying a number that’s higher than zero is too high, and so that’s certainly true. It’s not like we’re only going to be focused on the Greek students because that’s where the disparity turned up, we need to be mindful of the fact that students of all races, all class years — they are experiencing this and we need to be addressing it whenever it happens, whoever it happens to, whatever the circumstances are.” 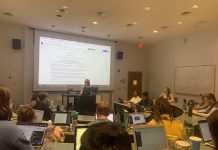 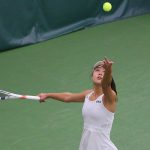 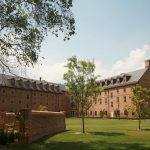