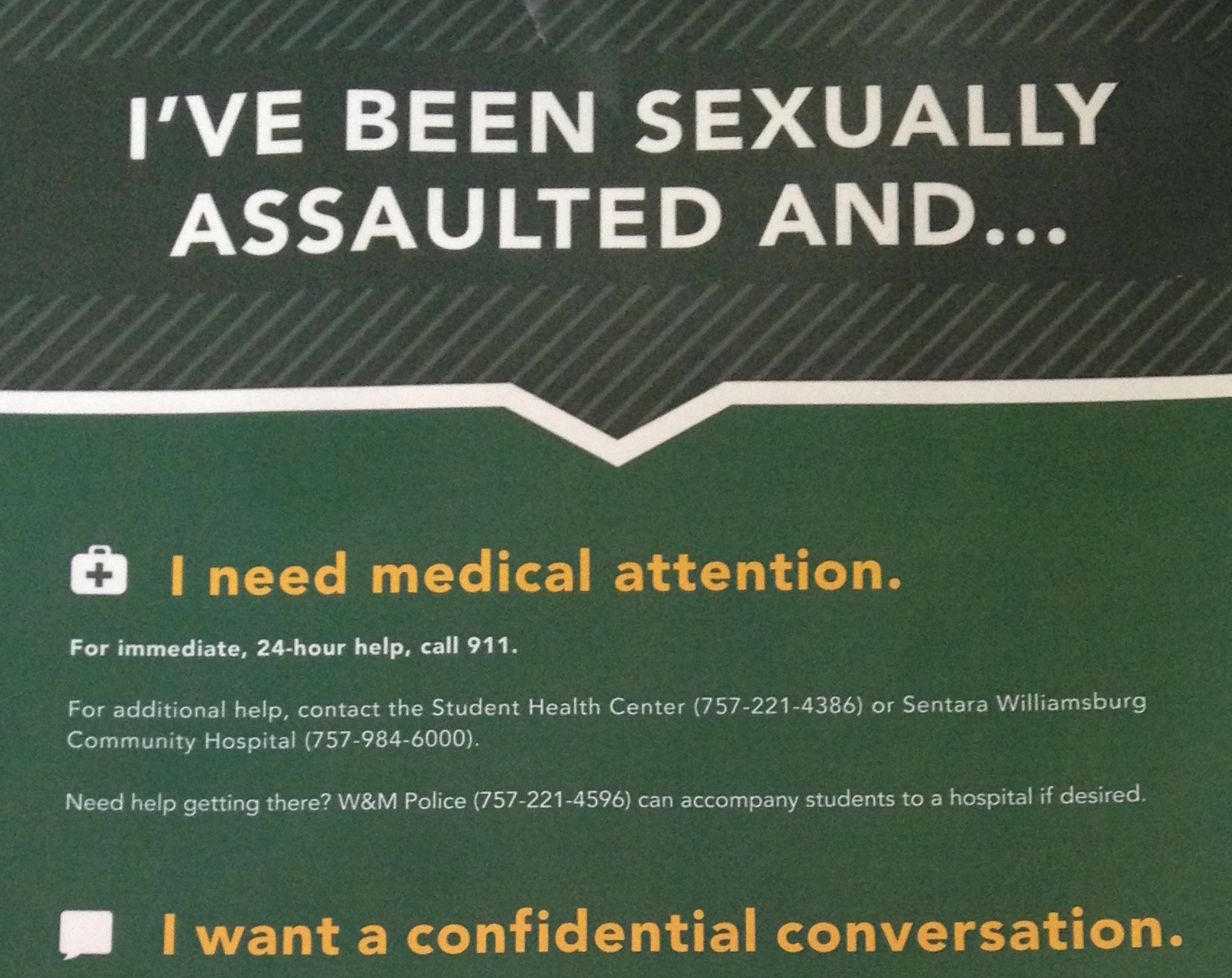 The College of William and Mary’s Task Force on the Prevention of Sexual Assault and Harassment released its findings and recommendations Sept. 10, including data from the campus-wide sexual misconduct climate survey. A number of those recommendations are already in progress or completed.

College President Taylor Reveley formed the 21-member task force Sept. 3 of last year; the findings were due June 30, 2015. Divided into four subcommittees, the task force aimed to tackle campus climate, prevention and education, faculty and staff training, and investigation and adjudication as per Reveley’s request.

“I am very grateful to the members of the task force and its subcommittees for their extremely hard, conscientious work,” Reveley said in a campus-wide email. “The task force’s 21 members — students, faculty and staff — were drawn from across the university and led by Student Affairs VP Ginger Ambler. They tackled pertinent issues in all their complexity and produced meaningful recommendations about how those of us at W&M can do better.”

“Any time you hear that people in your community are experiencing sexual violence is distressing, and there is no doubt about it that any sexual assault is too much in our community,” Ambler said. “You know we didn’t know what to expect, it’s very hard to gauge because the reporting percentages are so low.”

The task force worked to turn its recommendations into actions well before the June 30 deadline, including opening The Haven, a “safe space” for confidential conversations about sexual violence and harassment, last October. The Dean of Students Office and the Compliance and Equity Office updated their respective websites to better communicate resources for students, as well as provide clear directions for receiving help if necessary. Improved communication was something the task force worked particularly hard on, according to Vice President for Student Affairs and Task Force Chair Ginger Ambler ’88 M.Ed. ’06.

“If there was anything that was clear to us in the climate survey and in focus groups and other conversations with students is that we were surprised at how much students didn’t know about where to go — how to file a report,” Ambler said. “We’ve done a better job with the website and the posters to clarify that students can come forward confidentially as well as in a formal way, and I think knowing that there is a confidential option — and there are multiple confidential options — I think hopefully will encourage more people to come forward.”

The Title IX office, headed by Title IX Chief Compliance Officer Kiersten Boyce, has been approved to have central oversight responsibility for all campus-related sexual violence. The College has also already hired a new full-time investigator for that office. Two other positions have been created in response to the recommendations. The College will hire a full-time director and professional coordinator of The Haven, as well as a full-time sexual assault education and prevention specialist.

In addition to centralizing oversight responsibilities, the task force outlined four other overarching recommendations, including the creation of a permanent committee to carry on the task force’s work, to be headed by Dean of Students Marjorie Thomas, and a three-to-five-year strategic plan. Another recommendation is to expand the role of the education and prevention committee to advise other offices of the College. The fifth overarching recommendation, to hire three new administrative positions and add a second full-time crime specialist to the William and Mary Police Department, is nearly complete.

The College is one of only a few schools nationally to collect sexual violence data through a campus-wide climate survey. Of all undergraduate and graduate students, 2,660, or about 32 percent, responded to at least one question. Only 27 percent of students completed the survey.

“Our main goal was to try to figure out what is the status of our campus community with regard to sexual violence or misconduct and the whole spectrum really, from the verbal to the non-verbal,” Ambler said.

Due to the nature of study and the margin of error, it would not be accurate to extrapolate from the data and apply the findings to the College as a whole. The survey did, however, inform the task force on the extent to which instances of sexual misconduct are not reported and which campus communities are affected most. The data show that 2 percent, or 58 students, reported experiencing rape since enrolling at the College, but only 12% of those students filed a grievance. Physical and non-physical misconduct was reported at 18 and 46 percent respectively and over 55 percent of respondents acknowledged observing sexual misconduct toward someone else.

The Task Force report also collected Title IX data for the academic years since 2011-12. Data for the 2014-15 academic year is currently being compiled and will be available soon, according to Boyce. In the 2013-14 school year, only 13 students filed a grievance for non-consensual intercourse with the College. Nationally, sexual assault is one of the most underreported crimes, and Ambler said the task force suspected that was the case at the College.

“Any time you hear that people in your community are experiencing sexual violence is distressing, and there is no doubt about it that any sexual assault is too much in our community,” Ambler said. “You know we didn’t know what to expect, it’s very hard to gauge because the reporting percentages are so low that we make our best decisions and move forward with what we know. This climate survey gave us much better information to really look at the dimensions of the problem and how it exists here in our campus community.”

As policies change and the recommendations take effect, Associate Vice President for Communications and University Relations Brian Whitson said that the College is preparing to take on more cases.

“When you think about the low percentage of students who actually reported sexual assaults, as you think about the change in culture … we expect the number of reports to go up as students, whether they’re more aware of the resources or the different ways to report or with the change in culture, they’re more comfortable coming forward, I think that’s what we want to see,” Whitson said. “We want to see students feeling comfortable enough to come forward and report.”

“We want to empower, but we also don’t want to imply that we’re disinterested because we like to take action, we want to help,” Boyce said.

Although her office will oversee reporting, Boyce said that coordination with other departments will still be necessary. She said her office is working on a more clear and streamlined process for students coming in with a report, but that it will still work closely with the Dean of Students’ office. Boyce indicated that throughout the reporting process, whether the report is confidential or otherwise, the student is still the focus.

“One of the nuanced and difficult items, but very important, we’ve been trying to work through is balancing respecting survivors’ rights to take the route that they want, at the time that they want,” Boyce said. “In some cases when you’re in that situation it can even come across that you’re putting too much of a burden on the survivor … as in ‘well it’s all up to you’ — hands off. Well, we want to empower, but we also don’t want to imply that we’re disinterested because we like to take action, we want to help.”