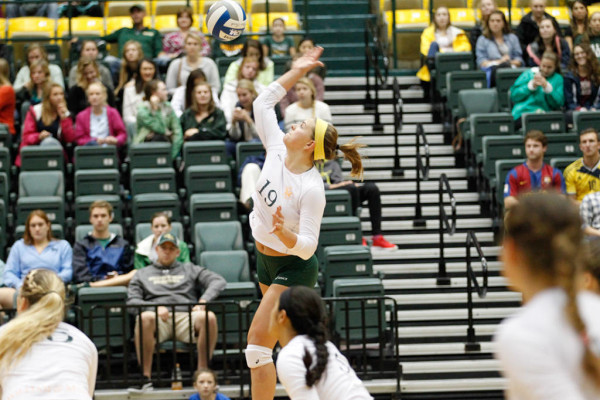 After falling to James Madison in five sets last week, the College (7-11, 1-4 CAA) needed a win to gain some momentum for the remainder of its CAA matchups. That victory didn’t come as the Seahawks (13-4, 4-1 CAA) outmatched the Tribe from the opening set.

UNC-W quickly established themselves with a 25-10 win in the first game. The College scored off a kill by sophomore Paige Humphrey early to put the score at 2-1, but the Seahawks proceeded to complete a 10-3 run before the Tribe strung together any consecutive points. After an exchange of three straight points for the College drew the Tribe within eight points at a 15-7 deficit, UNC-W broke away to claim the set with ease.

Down 1-0, the Tribe didn’t appear fazed by the deficit as it took the second set 26-24, keeping up with and eventually edging its opponent. Starting with a 5-2 run, the College allowed four consecutive points, tying the set at eight. The teams would tie again at 10, 11, 14, 15, 22 and 24 before the Tribe made the final two points of the set. The Seahawks appeared to break away at the 15-point mark, taking a 19-15 lead off of Tribe attack errors before head coach Melissa Aldrich Shelton ’91 took a timeout. The College then fought its way back into the game with renewed focus, claiming the set by a kill by senior Dessi Koleva assisted by junior Gabrielle Pe.

The trend of William and Mary keeping the game tight before giving up several consecutive points continued in set three. While the score was tied at 12 apiece, the Tribe allowed the visiting Seahawks to go on a 9-1 run, which put the board at 21-13. The College persisted and made it to the 20-point mark before surrendering the game point to put UNC-W ahead 2-1 on the night as the third set finished 25-20.

The fourth and final set was déjà vu of the third, as it also ended with a Seahawk victory at a 25-20 margin. In the first half of the set, the teams exchanged leads and ties throughout, making it look as if the College would force a fifth set, before UNC-W began to pull ahead, a sight consistent in other recent Tribe defeats. Down 22-17, the College looked primed to come back, scoring a pair of points before UNC-W scored its 23rd. The score now at 23-19, the Tribe needed a 6-1 run to win the set; it got one-third of that run as a Seahawk service error and attack error put the College at a three-point deficit at 23-20. UNC-W sealed its victory with a pair of kills to claim the match and extend William and Mary’s losing streak to three.

Despite the losing result, the game was close with a total 27 ties and 10 lead changes in the four-set match.

Despite the losing result, the game was close with a total 27 ties and 10 lead changes in the four-set match. Sophomore Sydney Biniak led the team with 14 kills, while Koleva led in digs with a game-high 18. Defensively, senior Carolyn Albright shined with four of the Tribe’s six blocks — she is 14 blocks away from the milestone of 400 career blocks.

With the loss, the College sits in a tie for sixth in the conference with Northeastern with 11 games remaining to turn around the 2015 campaign,  and while climbing back above .500 remains an uphill battle for the squad, the Tribe at least is likely to avert a disastrous losing season like 2014’s 7-24, 3-13finish.