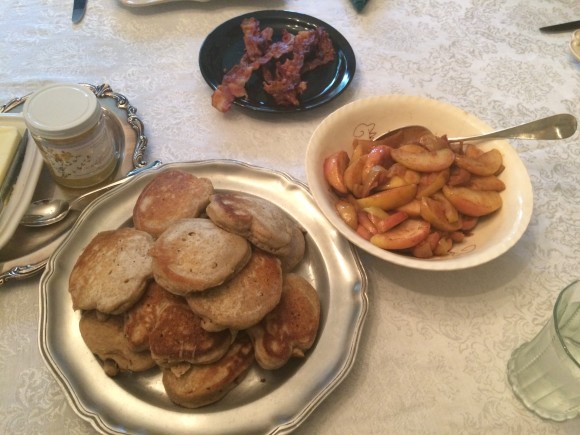 The entire state of Virginia relishes the first week when the northern winds blow chilly breath across the Mason-Dixon. Leaves begin to quiver in the gusts that fade their youthful countenance, humidity vanishes almost as if it had never been, lungs inhale more deeply to drink up blustery vigor, and a girl from the Valley transported to the swampy Tidewater pines for the delicacy of fall in the Appalachians.

In no place but the Valley does fall surge into its full sensational splendor.

No feeling quite matches that of flying down a winding road under bursts of sun and crimson leaves, turning the damper on the flu and smelling the first swirls of ash filter out of the chimney, debating which Thanksgiving desserts will make an appearance at the table, or stirring a cauldron of apple butter in a cow pasture under a brilliant sky until your arms feel weak. In no place but the Valley does fall surge into its full sensational splendor. There the season is both tangible and ephemeral in the same breath – a perfect parallel to the nature of the food world, a world that fall in the Valley embraces wholeheartedly.

Our farmers’ markets abound with apples whose soft white flesh rivals that of their more famous sisters in the Piedmont and the sticky remnants of summer flower fields. These two underrated products of Augusta County are the “it couple” of the season, before pumpkins and squash almost tumble out of the backs of trucks onto clean brick sidewalks.

Fortunately for those who would give life and limb to return to their homes, apple trees bear fruit and bees hover over petals across America. An effortless stovetop roast and a pile of buckwheat pancakes evoke the warm comfort of a childhood home as cold air descends from the hilltops.

An effortless stovetop roast and a pile of buckwheat pancakes evoke the warm comfort of a childhood home as cold air descends from the hilltops.

Cooking apples — Granny Smiths and Royal Courts — withstand the heat of the stove better than eating apples — Honeycrisps and Golden Deliciouses. This may go without saying, but an unfamiliarity with the versatility of the fruit or a fear of using cooking apples for nothing but heavily sweetened pies and tarts may lead to an easy misstep. Don’t skin the apples either; it leaves them naked and very ashamed. Wrapping helps preserve the shape of each slice during the roasting. A generous sprinkling of piquant spices should resemble a miniature Dust Bowl as ground cloves, cinnamon and grated nutmeg billow over a pan. After a drizzle of honey and a stir, allow the concoction to sit over medium heat. Steam will presently begin to escape so that the room fills with an array of cozy aromatics and the apples do not swim in their own sweat.

Meanwhile, ready the batter for the buckwheat pancakes. A dalliance with buckwheat is not for the faint of heart; even the dust-colored tawny flour strikes its beholder as rugged and enduring, as a testament to those who cultivated it. Buckwheat, the mountains and hearty Appalachian Americans have a history. The hearty grain — fruit, actually, since it’s akin to rhubarb — grows uninhibited in the hardscrabble soil of the American backcountry and became a cheap substitute for wheat flour in those regions. Buckwheat lends a denser texture and an almost sour flavor to its baked goods but when tempered with other flavors, results in a satisfying complex savory experience.

Adding cinnamon and vanilla to buckwheat flour batter combats its initial bitter character and illuminates the undertones of wheat flour familiar to our palates. Greasing the pancake skillet with butter further sweetens the pancakes, but in the true unapologetically unpretentious nature of fall, a skim of bacon fat lining the bottom of a cast iron vessel lends a smoky fullness to the pancake. As the fat and heat combine to brown one side of the quickbread, reminders of woodsmoke waft from the skillet to the nose.

After slabs — yes, slabs — of dense buckwheat pancakes begin to fill a platter and the apples have roasted to contentment, the two entities of autumn can meet.

After slabs — yes, slabs — of dense buckwheat pancakes begin to fill a platter and the apples have roasted to contentment, the two entities of autumn can meet. Ladling a generous amount of fruit around layers of pancake and butter graced with the floral notes of honey creates the feel of a deconstructed apple pie. The plate wraps a girl removed from the Valley in an embrace of solace: A flood of images of disturbing the stillness of a bucolic morning in an over-worn jeep, of brushing off the remnants of bark after carrying wood for fires inside, of smelling squash and pumpkins’ roasted orange flesh steam as it emerges from the oven last as long as does the dish.

With the last bite, the mental photo album flutters closed. The season unfolds as it always has and always will whether or not we watch each day become more perfectly crisp and clear than the last, whether or not we allow winds to tug the tendrils of our hair, whether or not we travel westward to experience Virginia fall in its paramount form.

Sift together dry ingredients. Beat the eggs and combine them with the buttermilk and whole milk until incorporated. Pour the melted butter into the egg and milk mixture with care that the butter has cooled sufficiently so that it will not cook the eggs. Combine wet and dry ingredients in a large mixing bowl with a wooden spoon. Grease a skillet on medium heat with either butter or bacon fat. Ladle generous dollops of the batter into the skillet. Flip when bubbles at the surface of the batter begin to pop.