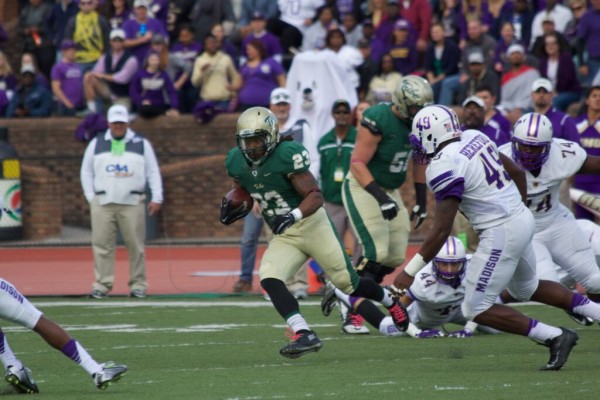 After flawless execution of the no-huddle offense throughout the entire game, James Madison quarterback Bryan Schor finally looked like a second-string player in the final 35 seconds when his team was down three points with a pair of timeouts remaining. Standing alone in the backfield of a five-wide shotgun set, Schor frantically tapped his helmet, motioned to his receivers, and barked pre-snap reads to his offensive linemen, but failed to take the snap prior to the delay of game. With the next play in the same formation, Schor called out his reads, and as he turned to his receivers, the snap flew by his facemask.

Sophomore defensive end Peyton Gryder raced to the fumble first, marking No. 16/15 William and Mary’s first takeaway via fumble recovery of the 2015 season, and more importantly, sealing the 44-41 victory over Colonial Athletic Association and in-state rival No. 9 JMU (7-2, 4-2 CAA) in a premier conference matchup Saturday at Zable Stadium in Williamsburg, Va.

The win propels the Tribe (6-2, 4-1 CAA) to second place in the CAA standings, overshadowing the mistakes committed by the College during the game.

Off the opening drive, the College defense looked helpless against the hurry-up offense, with the Dukes operating solely out of the shotgun. JMU utilized several combinations of read-options, running back draw plays, and play-action passes — a lethal combination given Schor’s ability in the option to tuck and run, as he finished the day with 15 carries for 76 yards and a touchdown. In 16 plays, James Madison cashed in its first touchdown on the ground and lined up for the extra point.

The Tribe special teams had other plans. Claytor broke through the line to block the kick, and senior free safety DeAndre Houston-Carson scooped up the ball to run all the way back for a two-point conversion, spinning away from the kicker to cross the goal line.

The 6-2 disadvantage quickly became a 13-2 deficit, as junior quarterback Steve Cluley’s first pass was intercepted and returned 35 yards for the touchdown. With Cluley’s first pick-6 of the season, the Tribe’s chances at the upset looked dim. This was compounded by the fact that freshman receiver Jack Armstrong fumbled on the kickoff return, though Gryder again recovered the fumble.

On the following drive, the College’s offense kept composure and relied upon the most consistent piece of the unit — the offensive line.

“The offensive line did a hell of a job opening holes for the running backs,” Cluley said. “I didn’t get hit all day. I owe the credit to those guys.”

Senior tailback Mikal Abdul-Saboor capped off the Tribe’s first touchdown drive with a 21-yard run up the left sideline, stiff-arming the Dukes’ safety from the 5-yard line all the way to the end zone. Success on the offensive side of the ball was a familiar story for the Tribe, as the College notched 234 yards of rushing and 235 yards through the air in a very balanced attack.

“We’re going against the No. 1 offense in the nation, and we outgained them,” head coach Jimmye Laycock ‘70 said. “That’s pretty good.”

We’re going against the No. 1 offense in the nation, and we outgained them,” head coach Jimmye Laycock ‘70 said. “That’s pretty good.”

The defense however, continued to struggle throughout the game; James Madison finished the day with 460 yards of total offense compared to the Tribe’s 469. The Dukes promptly answered the Tribe’s scoring drive with one of their own just 1 minute, 25 seconds later. Schor rushed ahead for 24 yards, hurried to the line, and threw a 42-yard strike on a slant-route with the Tribe secondary out of position. Schor scored one two yard run on 2nd and goal.

JMU’s special teams experienced déjà vu on the next extra point, as the kick appeared to be blocked by Claytor again and returned for two points by Houston-Carson. However, a flag was thrown on the play, and the Dukes was allowed to replay the down. This call was made despite major controversy –  the block in the back occurred after the kick had been blocked. The Dukes went for two and converted, leading the Tribe 21-9.

The Tribe offense stalled out on the next drive, but the defense finally forced JMU to punt on the subsequent drive.

Cluley found a favorite target in senior receiver Christian Reeves, finishing 3 of 3 to Reeves for 36 yards on the Tribe’s next drive. Reeves went down with a hamstring injury when reaching for the goal line, fumbling on the play, but sophomore receiver Daniel Kuzjack recovered the ball at the JMU 1-yard line. Abdul-Saboor punched the ball in, and the Tribe trailed 21-16.

Sophomore wide receiver DeVonte Dedmon returned the ball to the William and Mary 48-yard line, giving Cluley excellent field position to orchestrate the next Tribe touchdown drive. Kuzjak filled in well for Reeves, and he finished with 4 receptions for 50 yards. Abdul-Saboor and junior running back Kendell Anderson formed an excellent tailback tandem of speed and power, with Anderson scoring the Tribe’s third touchdown from seven yards out.

The first half ended with the Dukes leading 27-23, as the defense shut down the Dukes’ offense for the last two drives before halftime.

The second half slowed down considerably with each team punting away their first possession. The Dukes finally extended the lead to 34-23 after a missed 51-yard field goal from the Tribe set them up in good field position. The College stormed right back with an eight-minute drive featuring Anderson grinding through the defense, scoring from two yards out to cut the lead to 34-30.

Under pressure, Schor overthrew his receiver in the fourth quarter, a fateful throw as Houston-Carson made the interception, shifting the momentum of the game. The Tribe took its first lead of the game with another long drive, as Abdul-Saboor put the Tribe up 37-34 with a 15-yard run on the five-minute drive.

Schor executed the next drive to perfection, running the no-huddle en route to another scoring drive. With five minutes remaining, James Madison held a 41-37 advantage.

“We had what we wanted, we had it in striking distance, all we had to do was go all the way down the field and score,” Laycock said of the final drive.

William and Mary took over at its own 16-yard line, with three timeouts and 5:12 to play, down four points in a crucial game. Cluley remained calm with the game on the line.

“I trust the coaches … they call the plays and I execute them,” Cluley said.

In a methodical, 13-play drive, the Tribe rushed eight times for 43 yards behind the dominant offensive line, burning the clock down to 41 seconds as Anderson crossed the goal line from 2 yards out.

The Dukes’ offense choked on the final drive, and the Tribe claimed the 44-41 victory, putting the College in second place in the CAA and, with three games to play, in the driver’s seat for a Football Championship Subdivision playoff berth.

Up next for the Tribe is a Nov. 7 road game against Elon, the No. 9 team in the 12-team CAA. Kickoff is set for noon and will be broadcast on Comcast SportsNet.