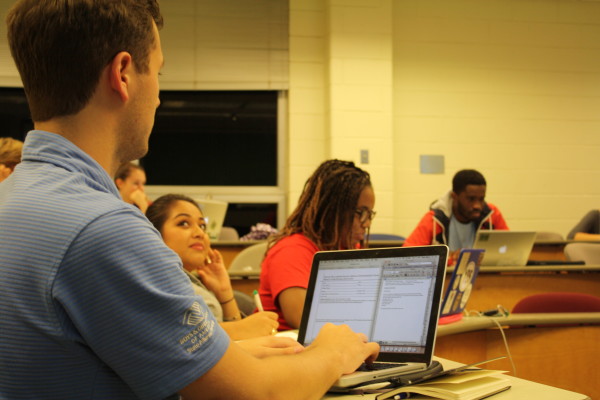 The Student Assembly Senate heard updates on the Tribe Turkey Drive bill and the Swem Massage Chairs Act, as well as proposals for three new bills during Tuesday evening’s meeting.

After much discussion during last week’s meeting that led to the passage of the Tribe Turkey Drive Act, Class of 2017 President Katherine Ambrose updated the senate on each of the bills clauses, which were passed separately, and specified where the allocated funds for the first two clauses would come from.

“Following discussions with senators and the executive office, we decided the money will be coming from the off-campus account,” Ambrose said.

According to SA Advisor and Associate Director of Student Leadership Development Trici Fredrick M.Ed. ’05, this off-campus account is not state funded, unlike the SA reserve fund, and holds money from a previous Student Assembly initiative that made revenue by selling lofts and sheets.

Sen. Eboni Brown ’17 introduced the Spring Concert Act Part I, which allocates up to $50,000 from the SA reserves for the artist selected for the spring concert. This act also calls for the bill’s sponsors to serve on a committee to select the artist, for sponsors to update the senate after an artist has been chosen, and charges AMP with the concert’s contract details, production costs and set-up.

Related to the Spring Concert Act Part I is the Charter Day Grant Act sponsored by Sen. Ivanessa Staykova ’16. The bill allocates up to $15,000 for grants for student organizations who apply to hold a campus-wide Charter Day event.

Ackerman assigned the bill to the finance, student life and public affairs committees.

Sen. J.C. LaRiviere ’17 introduced a bill to fund the TedX 2016 Conference. In total, the bill calls for the allocation of $17,000 for general costs, as well as the lodging and travel fees of speakers.

“It’s been a wildly successful event every year, and I believe William and Mary’s TedX conferences have been ranked very high on a national basis,” LaRiviere said. “In my opinion, this is one of the best events the SA funds all year.”

Ackerman assigned the bill to the finance, student life and policy committees.

“As we discussed before, Restin, LLC will honor the contract that we first established four years ago,” Ackermann said. “This will be renewing the contract. This is simply authorizing the renewal for another three years of that contract, it will not be coming out of this year’s funds, but makes it a priority for next year’s funds.”

During senate discussion, Class of 2016 president Mark Bland gave the bill two-thumbs up. The bill was reassigned to the student life and finance committees and will return as old business next week.

Sen. Sikander Zakriya ’19 updated the senate on the Senate Aide Program, a program that would create positions for individuals to get involved with the senate by focusing their energy on specific interests or areas.

“Essentially a senate aide is basically an individual who would work with senators, we were thinking it would just be freshmen who could apply to this,” Zakriya said. “If you lose your freshmen year elections, you typically are discouraged from SA, there isn’t really other opportunities to get involved with SA … Essentially what you would do is work with senators who are interested in sponsoring bills.”

No details for this program have been finalized, and senators discussed possibilities for the role of the individuals selected to help the senate, as well as changing the program’s official name.

A representative from the Elections Commission was not in attendance to make a special presentation as scheduled for the second consecutive week.