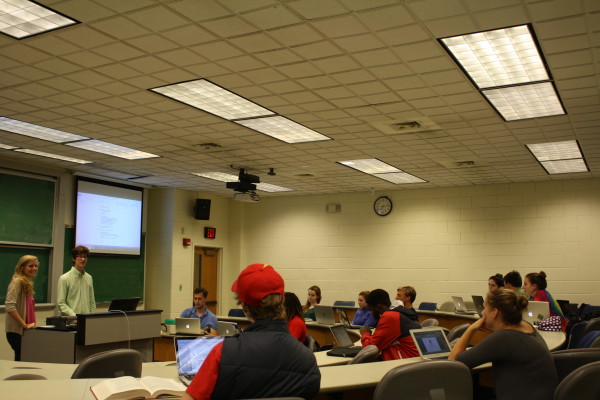 In Tuesday’s meeting, the Student Assembly senate discussed and passed the Tribe Turkey Act bill after much discussion and heard a presentation on the current state of the SA’s finances.

The Tribe Turkey Act states that the senate will match one-half of outside funds raised, capped at $2000, to fund Thanksgiving donation baskets for families in the Williamsburg community. The SA has partnered with Sodexo for the event. Additionally, the bill allocates $500 to purchase the baskets, allows for the involvement of various campus organizations in the initiative, and establishes Nov. 21 as a Student Assembly Day of Service.

Opposition to the bill stemmed mainly from the bill’s first two clauses, which allocated SA funds for the initiative. Class of 2017 President Katherine Ambrose ’17, a sponsor of the bill, said that it was only appropriate for SA to match the contributions of Sodexo, USA and other organizations.

“In my personal opinion, I do not think that it is appropriate of us to be asking Sodexo for their contributions and asking the Office of Community Engagement, the Sharpe program and students on campus for their contributions, if we are not also going to put some of our own funding into it,” Ambrose said. “We have cut down the funding that was originally in the bill to make it something that is a lot more carefully spread, a lot more carefully thought out.”

Some other SA members, like Chief of Staff Sutton MacQueen ’16, agreed with the moral importance of the Turkey Drive, but did not agree with Ambrose’s logic for the allocation of SA funds. MacQueen cited how other groups, such as Campus Kitchens, hold similar initiatives.

“On a moral level I completely agree with this,” MacQueen said. “I think that you are entirely right that if we are asking things from people that we should put forth something of ourselves as well. Speaking from a purely finance point of view, the funds that we gather from students are meant to go towards events on campus. Because we have groups like Campus Kitchens doing these things, are we violating our own code in terms of how we use those funds and what those funds are set out to do?”

Chairman of the Senate Dan Ackerman ’16 said that according to finance code, there is nothing that would prevent SA funds from being used for this initiative.

Sen. Eboni Brown ’17, chair of the senate finance committee, further questioned whether SA was able to allocate funds for donations for an off-campus event based on how the finance committee chooses on-campus organizations to support.

Another point of opposition to the bill was brought by Sen. Quetzabel Benavides ’16. Benavides questioned whether SA was the right organization for this initiative as other organizations work towards similar initiatives, and whether a proper conversation addressing the needs of the community had been held.

“If the point of this is to do something for service, to have this moral responsibility, as student leaders, we should accept we are not well versed in this subject,” Benavides said. “We haven’t had a conversation about what this means, how this need has been identified … So we are setting ourselves up for this huge event that other people in the community are already doing, who already have resources that we could put ourselves in to perhaps further understand this issue, instead of undertaking something that we don’t even know at this point is the best thing to address the need.”

In response to this point of opposition, Sen. Danny O’Dea ’18 said that he believed the senate would be surprised by students’ willingness and enthusiasm to volunteer and participate in the initiative.

“We have already identified organizations in the community who can are willing to help us,” O’Dea said. “This is hunger in one of the poorer areas in the state of Virginia, I feel like there’s always going to be a need. As the Student Assembly, we have a massive network of students on campus who will be willing to volunteer. More than any of these things, this gives us an opportunity not as the Student Assembly, but as the student body of the College of William and Mary to look around us like we say we always want to and that administration says we do and see the world as it is and our place in it and our ability to help the people around us. We don’t get this opportunity very often, and I believe the students in this college, if given this opportunity, they will jump at it. I think we will be shocked by the number of volunteers we will get.”

The senate motioned to vote on each of the four individual clauses of the bill by roll call. All four clauses passed. Benavides, Brown, and Sen. Seth Opoku-Yeboah ’16 voted against all four clauses. Sen. Annalise Yackow ’18 abstained from voting on the first and second clause, and Sen. Alexis Payne ’19 and Sen. Sikander Zakriya ’19 abstained from voting on the first, second and fourth clauses.

The senate also passed the Code Revision Committee Act by unanimous consent during the meeting. The bill creates a code revision committee for the 323rd session of senate; the chairman of the senate and the senate executive committee will select members of the committee. O’Dea, the bill’s sponsor, accepted several friendly amendments during the meeting to fix several typos on the bill, including the wrong year.

Secretary of Finance James Shaw ’18 also updated the senate on the state of SA’s finances. The starting amount in the SA Reserve Fund was $182,726.69, down to $175,037.69 as of Oct. 30. Representatives from the Department of Health and Safety and the Elections Commission were not in attendance to make presentations as scheduled.

During the meeting, Sen. Colleen Heberle ’18 found out that she had won an elected seat on the Williamsburg Soil and Water Conservation District.